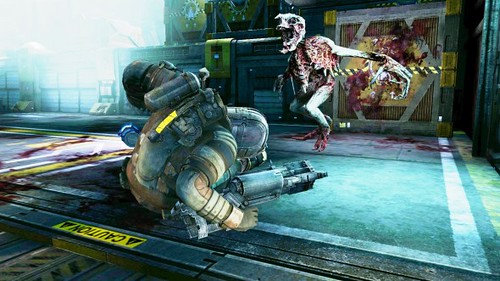 Dead Space 2 multiplayer maps are dark as they should and are suited for its objective oriented gameplay. Following are the maps included in Dead Space 2 and our guide will walk you through every aspect of each map.

The ultimate objective in this map is to escape Ishimura through the escape pods. Following are the objective you need to complete to win this map.
Objectives

Playing Human
Your first objective is at the necromorph spawn location. So, you need to get there quickly. Server rooms are on different floors. Stick together and activate the lower room first then head for the one above.

The priming stations ahead across the bridge can be a tough task to complete as there are too many necromorph spawning vents there. Rely on team work and cover each other while activating objective.

The 30 sec timer will start once the first human player enters the pod. So what should you do? I hope there could be any other solution except that you should run for it and reach it in time.

Playing Necromorph
Being a necromorph, always try to delay the first couple of objectives as much as you can. Later objectives give humans time making things difficult for you. Defending the first objective can be easy for you as the initial necromorph spawn is in the server room.

If you are playing as a Puker or a Lurker, your ranged attacks in the control rooms area can prove useful. Once humans have reached the bridge, you can use various vents there to spawn and create problems for them. NPC’s will always be there to help your goal. Once humans have activated the authorization panel, it is very difficult to stop them.

Your main goal in this map is to destroy the fuel core which will annihilate the whole necromorph population.

Playing Human
Head straight to pick the repair unit and deliver it to the ventilation room. Your initial spawn is at workshop while necromorphs spawn closer to your first objective. So if you hurry right from the start, you can take them by surprise. The repair unit carrier can only walk (can’t run) so other players need to provide cover. Once placed to its designated spot, you need to protect it from necromorphs for 30 seconds.

Next to the workshop – you need to activate two consoles and then you can collect the data from the computer and deliver it. Again teamwork would be crucial while activating the objectives.

Move to the fuel core and prime the detonator. You need to defend it for 1 minute. Spread out so that you can cover maximum possible directions for the necromorph attack.

Playing Necromorph
Being a necromorph, you always should exploit the human weak links. In this map, human weak links are the carries of repair unit and the data disc. Once these objects are dropped, you can defend them so that humans don’t have them back easily. You can waste lot of their time using this strategy.

You can also ambush them at the places where you know they need to deliver objectives to proceed like in the ventilation room.

As a human, your main objective here is to destroy the marker experiments.

Playing Human
Like always, necromorphs will spawn near the first objective making things difficult for you. You need to destroy the power junction (by shooting at it till it is destroyed). Teammates with upgraded weapons should shoot the junction while deal with necromorphs.

After opening the containment field, you need to destroy the initial marker that is present at the center of the first marker lab. Don’t go alone in that room to destroy the marker as you will be overrun by the necromorphs. You should have at least one to cover your back while you destroy it.

Same strategy can be used to destroy the final marker. Make sure you gather ammo dropped by necromorphs as following marker requires more firepower than the first one.

Playing Necromorph
Your best chance to win the round here is to defend the power junction. Your initial spawn point near to the power junction will make things easy for you. You can re-spawn at the same position to make life tough for humans. But once they have destroyed the junction, your chance of winning will get thinner.

In this map, you need to deliver firing coordinates to the designated place.

Playing Human
You have 3 minutes to restore the power. Get through the rooms and activate the console to complete your first objective. It’s an easy job but again you can save some time for the future objective. While activating the console for security override, don’t forget to cover the corridor leading to the console.

Your next objective is to take that disk to another computer. You can expect necromorphs as you pass through the corridors. The key here is to protect the disc carrier. Dropped disc can make things difficult for you.

Beam emitters activation in that large room is your next objective. Since the room is capacious, you can move around easily which will help you aim your enemy effectively. Once you have the disc from the intel room (the one you visited early), run straight towards the final objective to win the round. Don’t forget that dropping the disc will only result in more delay, so the carrier must be protected.

Playing Necromorph
This map is best suited for the execution attacks as there are many good hiding spots. Lurkers and Packs can prove very handy on this map. You should target the disc carriers to make things easy for you. The best time to attack humans is either in corridors or while they are activating consoles. You should use vents in the ceilings for surprise attacks.

Your main task here is to stop the outbreak by constructing a shockmine.

Next you need to collect three devices and take them back to the bench. This task won’t be easy (unless you are against some newbies). In tunnels necromorphs will have advantage over you due to narrow space. So don’t rush specially when your are carrying the devices.

After you have successfully delivered the devices to the workbench, your next goal is to protect it for 1 minute. Defending an objective is not a big problem if you do it with teamwork. Otherwise, you can loose it as all enemy attacks will be focused on this workbench.

Playing Necromorph
Being a necromorph, you can adopt various strategies. One common plan you can go with is that you stay around the workbench as humans are going to visit this area often. You can also be aggressive and ambush them in the tunnels. Work in groups to cause more trouble.

Lurkers and Packs are useful while attacking the tunnels. Since you can see through walls (their skeletons) you can guess the path they are heading and then plan accordingly.