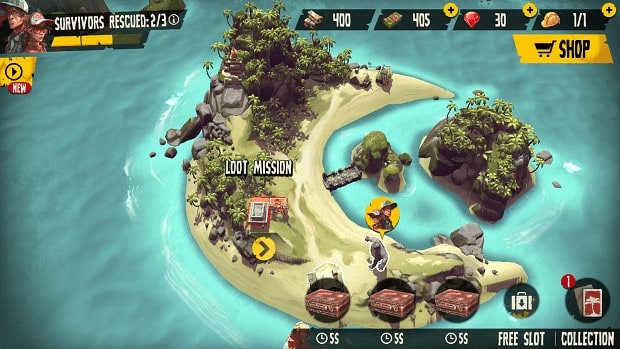 In this Dead Island Survivors Guide, we will share some tips and tricks on how to play Dead Island Survivors and how to survive the zombie apocalypse on the go. Dead Island franchise has taken a new turn and it has landed on our mobile devices in the form of a handy tower defense game. You must save yourself from the undead using different strategically placed towers and melee weapons.

We will tell you how to get more Diamonds, which hero to use, how to attack efficiently, how to use the island to your advantage, how to complete battles, and how you can place different traps in the game. With the help of our tips and tricks, you will be slaughtering the undead army in no time and survive the onslaught wave after wave.

Our Dead Island Survivors Guide details everything that you need to know about surviving the undead onslaught on your mobile devices. Let us start with how to get more Diamonds in the game.

You can easily farm more Diamonds by two primary ways. Since Diamonds are the premium currency in Dead Island Survivors and you will need them in order to perform different important tasks such as upgrading weapons, characters, smaller cooldown timers and other similar stuff.

You also earn in-game cash by completing different tasks but some of the best items and upgrades are only available through Diamonds and also if you do not want to wait for the upgrades for a long time. The first way to get Diamonds in the game is by opening up briefcases.

You get briefcases by completing achievements, battles and other time-specific events in the game. When you open a briefcase, you will get Diamonds, traps, weapons and other useful items so they serve a wider purpose rather than just providing you with Diamonds. Briefcases are the primary loot in the game so you will get them after every victory.

There is actually another way of earning these Diamonds but that requires paying actual money. We do not recommend that you pay for Diamonds as they can be earned by getting briefcases and completing the achievements.

The placement of traps play a vital role in the game and they will be the reason behind a victory or a loss. Each trap that you place in the game will be very important and you must think ahead instead of just blindly placing the traps on the map. Granted that you can melee the zombies to deal them damage as well but traps deal a huge amount of damage to them and you cannot be present at all places at the same time.

You must place the traps during the build phase of the battle. By putting traps on the battlefield, you can create a path for the zombies to follow and while they are using this forced path, they will also be damaged by the traps that make using traps a double win. You can control their movement as well as deal massive damage to them.

Each battle will allow you to put a specific number of traps on the field so you must be very careful with their placement. To check how many traps a battle allows, click on the battle and check on the icon on the bottom left of the info screen. It will show a number, which is the number of the traps allowed on the field.

To put the trap down, open up the trap menu, choose the trap and drag it to the desired location on the map. After putting a trap down, you can also upgrade these traps by tapping them and choosing the upgrade option. This will also show you how much increment in stats will be applied when you upgrade that trap. Confirm to apply the upgrade.

The game features different islands and each island comes with its own different natural traps. You must use these natural traps and hazards as much as you can as they can prove to be very helpful in battles. These could include explosive barrels, water, spike traps, etc. Use them to control huge waves or boss battles easily. They can really help you turn the battle in your favor.

Apart from using traps to kill zombies, you will also use your hero to kill zombies via melee combat. The game offers a number of fun and unique melee weapons that can be used to kill the zombies. You can simply drag your character on the map, put it near a zombie, and then tap on the zombie to attack it.

A powerful attack can also be performed by swiping across the screen and it will need to charge up after every use. This is a great way to keep the zombies away from the fences. You can set up traps to lure them to a central place and then use your melee combined with traps to deal some serious damage to the zombies. Always use melee combat to your advantage and never rely entirely on the traps.

The speed of your attacks is dependent on your taps. The faster you tap, the faster the damage is dealt with the zombies. If you tap once, the hero will continue to attack with the normal auto-attack speed but if you tap on the repeatedly, the speed will increase and more attacks will be dealt with them quickly.

Dead Island Survivors features different heroes and each hero comes with their own unique strengths. If you are picking a hero, it is recommended that you follow their recommended gaming style, as they will perform better performing the task they are meant to be. Some heroes are excellent without the traps but some require being near the traps to be more effective.

You can use such low damage heroes near the traps and the traps can handle the rest. Place traps in close proximity of you are planning to use heroes, which deal less amount of damage and then use your hero to lure the zombies to it. This will turn the battle to a great zombie slaughtering fest.

You should always look for the strength for the hero that you are picking and then use it in the battle to make the most out of them.

This concludes our Dead Island Survivors Guide. If you want to add anything to this guide, feel free to use the comments section below!