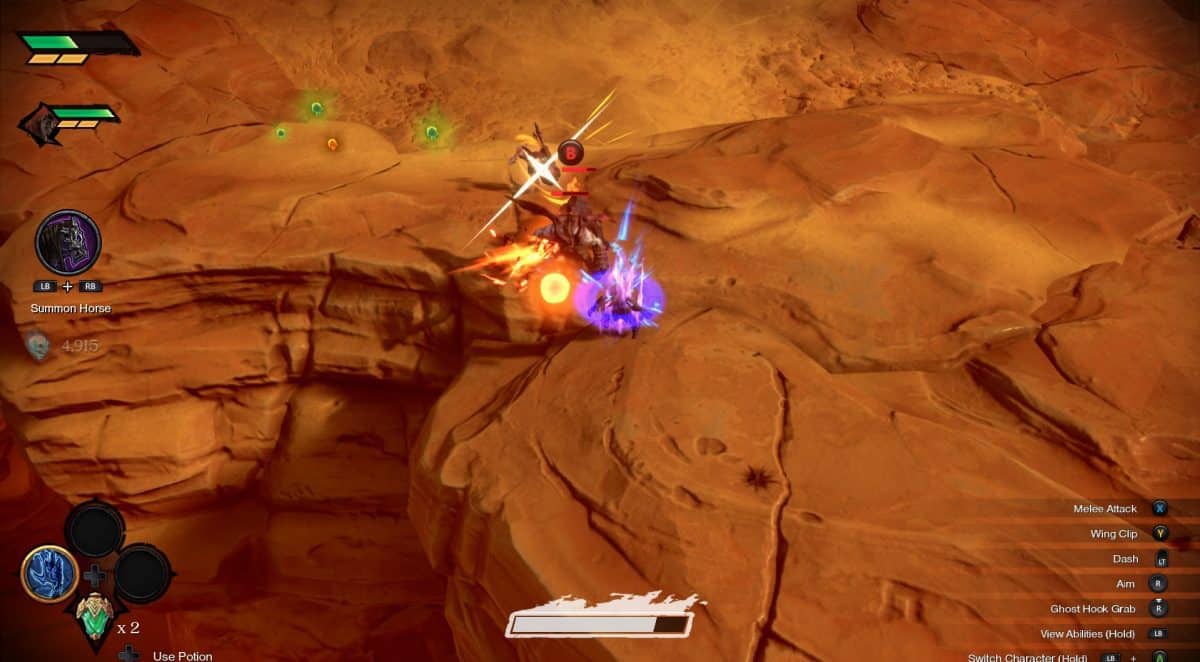 Competing against enemies either alone or with your friends is a lot of fun in where you can use different battle tactics but it’s the most fun when you perform the finishers and end the fight with a unique style. Performing a finisher and winning with style is an easy task. This Darksiders Genesis Finishers guide will help you ensure you kill your enemies with style.

Just before completely defeating the enemy one has to keep an eye on the health bar of the enemy.

At low health, the finisher feature becomes available which can be seen on the top of the low health enemies in the form of a small red dot.

As soon as you see this dot, it’s time to finish the fight with style.

A finisher doesn’t only come with a fancy way to defeat your enemy but it can even have a competitive advantage over the enemy.

Finishers can enable you to kill your enemy in one move rather than taking a lot of time killing them slowly.

To perform the finishers, you must be close to the enemy when the red dot appears so that they can be killed in a stylish way bringing a better winning vibe.

Both Strife and War perform the finisher move in their own unique way and the screen goes into an animation. That is when you only have to watch as they perform their unique move where Strife uses his sharp blades to finish off the enemies or uses his guns to blow the enemies off. Strife may jump to their back and explode their heads as well. All of Strife’s finishers involve his precision with blades and his guns.

War, on the other hand, gives the enemies an element of surprise by getting out of sight and slicing the enemy into pieces or by shoving his blades right into their guts.

He can also jump up in the sky and deliver a very heavy blow to the enemy tearing it limb from limb in an explosion of blood. Either that or for large creatures and insects; he tears off their own limbs and impales them with it.

He can also impale small enemies and launch them like a baseball. For tailed enemies he grabs them by their tail and smashes them into the ground, while for large enemies with tails he may throw them in the sky and make them land on his huge great-sword.

In general, there’s a lot of gory impalement. You’ll find War abundantly using his sword to dispose of his enemies on the field and adding more to your momentum in the process (Not literally, but figuratively).

For Bosses both may have unique finishers.

Killing your enemies with Finishers will drop more items out of them and the chances of Creature Cores dropping are high as well which can be farmed too. Not only is this a good way of improving your farming technique, but it just adds more to the overall style of the game and prevents combat from going too stale.

It’s advisable to get out of the way especially when you are playing with Strife who likes to keep its distance anyway but you can pull the enemy closer with the hook and as soon as the prompt to perform the finisher appears, you can end it in isolation and safety.

War has a similar ability as well! As soon as the Red Dot appears, pull the enemy in closer using the Hook and either slice them up or shove your blades in them.