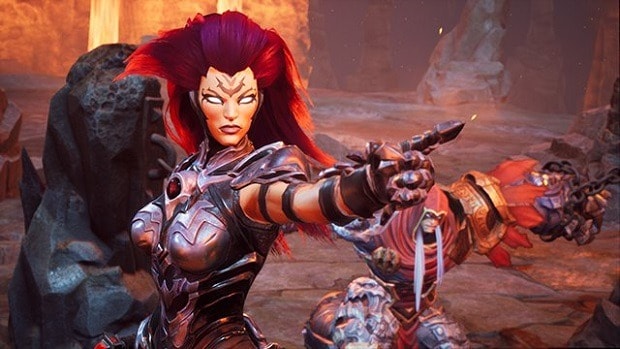 This Darksiders 3 Scorn Guide will cover all the shapes Fury’s whip Scorn can have, including combos/moves, and different possibilities for each shape.

Scorn is Fury’s only weapon in Darksiders 3 and changes its shape according to Fury’s will. She uses her Scorn to raze thousands of enemies into the ground within the blink of an eye, for the Scorn can extend or retract with her will.

According to the lore, the Mad Smith himself forged Scorn. Scorn or “Barbs of Scorn” as some prefer calling it; is a unique weapon and offers a lot of potential.

We will discuss all the different shapes the Scorn can use in combat and in the game itself. Of course, if you are looking for enhancements that can be done on Scorn, Weapon Enhancements Guide is here to brighten your day.

The first shape the Scorn can take is in the shape of a whip that is able to strike multiple enemies at once. Barbs of Scorn has a Base damage of 65 and offers a very moderate speed when trying to hit the enemies.

This is the base weapon and can be used in most situations without worrying much about the damage and the speed. The special ability the Barbs of Scorn can use is the ‘Whip Swing’ that is able to devastate enemies in a large area.

The Spinning Sweep attack can be used to hit enemies no matter in what position they are: behind you or in front of you.

The Barbs of Scorn may also be used to grapple and swing around the world from pipes and tree branches, solving puzzles, and reaching areas faster.

Of course, no weapon in Darksiders 3 is perfect. Although you can use this weapon at all times, there are some circumstances where using a Barbs of Scorn will be considered useless.

The following skills can be used from the Barbs of Scorn. We have listed how to use these skills with the Xbox controller, but the PS controller should work similarly too.

Judge, Jury
Judge, Jury is a four-hit combo. Although slow, this Judge, Jury combo offers compounding damage on your enemies.

Be sure that the combo does not always stun your enemies, so do not risk breaking your combo if you are not perfectly sure that you will escape the enemy’s attacks.

Executioner
Executioner is a five-hit combo, and actually an extension to the Judge, Jury key attack combo. It is useful against sluggish enemies or enemies that have been stunned temporarily.

Be careful though, this combo takes more time than the slow Judge, Jury skill.

Spin Fury
The Spin Fury is a skill that does damage to enemies in a circle. It is, technically, an AoE skill. Of course, it can also be used to do multiple hits at once on a large-scale enemy.

Spinning Sweep
Another skill like the Spin Fury, the Spinning Fury can be used to damage enemies easily. The enemies will have a very tough time protecting against attacks from this skill.

Killer Queen
The Killer Queen is a strong AoE skill, which features spinning at high velocity and then hitting the enemy with a heavy overhand slam that destroys all enemy defenses.

Ripcord
The Ripcord is a skill that can be used to eliminate a single enemy from far away. This can also be used to navigate through the forests. If you initiate Ripcord by an Air Initiation attack, Ripcord will knock enemies back.

Unholy Exorcism
If you continue to use Ripcord, it will transition into an Unholy Exorcism, which is a finisher move that deals a ton of damage all at once.

Flip Saw
The Flip Saw attack can be used to approach enemies quickly, decreasing the distance between you and them, without the enemies noticing.

Gravel Grinder
Continue with the Flip Saw and it will convert into a Gravel Grinder with a lot of combos. This is a good aerial combo and has a good damage output.

Razor Onslaught
The Razor Onslaught is similar in design to the Gravel Grinder, but has a better damage output and looks cooler. It can be used when other options do not seem viable in mid-air.

Wraith Attack – Scarlet Strike
The strongest skill that the Barbs of Scorn can use is the Scarlet Strike. It is an inescapable attack and will stun and throw back any enemy in Fury’s path.

This will also give Fury temporary invulnerability and has a wide area of effect, making it especially useful against hordes of enemies.

You can upgrade the Barbs of Scorn to do more damage, but you will require several items to do so.

It is a bit stronger than the basic Barbs of Scorn, and is indeed very fast when compared to Barbs, but is only useful in close combat. These Chains will not hit enemies that are far away.

Chains of Scorn is especially useful if you are fighting against enemies solo or the enemies that are quite agile. But the Chains’ true power is unleashed when fighting heavily-guarded areas.

Chains of Scorn can also be used to smash objects like desks pretty easily. You can also burn up Hives using this weapon.

Burning these hives up will drop you Incandescent Remains and they are exclusive to a burnt hive.

These are the skills that can be used with Chains of Scorn:

Flicker and Other Crossovers
Chains of Scorn is able to quickly incorporate different attacks into one single devastating combo that can be changed by using different buttons every time.

By combining the crossover attacks with the Flicker initiation, Fury is able to keep the enemies always taking damage while keeping her distance. This will often stun the enemies too.

Wraith Attack – Immolation
The strongest skill to be used by the Chains of Scorn is the Immolation. When the Wraith Meter is full, activate the Flame Hollow. Fury will burst into flames and enemies in a certain radius will be immolated and thrown back.

The Lance of Scorn is a two-handed lance that is capable of spewing out destructive electricity. Scorn has been combined into a single shape in this Lance of Scorn. You can also charge and throw this Lance at enemies as a spear.

This makes it an excellent weapon at both close combat and enemies far away.

The Lance of Scorn does base damage of 65 and is fast for a lance. Moreover, you can stun enemies by using electric attack procs that have a somewhat high chance.

The Lance is not as effective as the Chains in terms of open-world, but Lance gives Fury the ability to Storm Glide through the areas without any issues.

Electric Blitz
The Electric Blitz can be used to decrease the distance between you and the enemy. Indeed, it might take a while to charge up the dashes, they are worth it though.

With electric-fast strikes, Fury is able to impale enemies with her lance. Hold the Hollow Attack button until you see flashes from the hilt, to unleash Electric Blitz.

Ragnarok
The Ragnarok can be used to unleash powerful attacks that involve a lot of power from the air.

Jump into the air and hold the Hollow Attack button to unleash the air of Ragnarok upon Fury’s enemies. It is an AoE skill and will stun all enemies nearby too.

Hurricane Counter
You can counter the enemy’s attacks with the lightning fast Lance of Scorn and hit the enemies with all the damage you can.

Using Hurricane Counter will inflict heavy damage to attacking enemies and also has a chance to shock them into submission. This is done extremely fast too, so you are able to follow up with other moves shortly afterward.

Wraith Attack – Triple Tempests
The strongest attack that can be done by the Lance of Scorn is the Triple Tempests and can be used to defeat multiple strong enemies that do not fall down quickly.

By activating this wraith attack, Fury’s able to throw three electric-powered tornadoes towards the battlefield, hitting all enemies nearby. It will also inflict a great deal of Arcane damage over time.

Do note that the Mallet’s extremely slow and it might take quite a lot of your time just trying to land one hit. The Mallet is also able to knock enemies back a few meters or so, with some of its skills.

Of course, not all skills will throw the enemies away, and not all enemies can be thrown away. Using the Mallet while airborne will offer you to deal devastating damage to the enemies on the ground.

Drop the Hammer
This is an especially strong skill which allows you to maneuver through the aggressive enemies’ charging attacks and giving you a great opening window to attack while they’re stunned or confused.

Charged attacks
If you use charged attacks with Force Hollow, Fury will swing the Mallet in a massive circle to knock all nearby enemies. Some of the best charged-attacks with this hammer include Moonshot and Shot Caller.

Wraith Attack – Cataclysm
The Wraith skill: Cataclysm is a wraith attack that is able to devastate enemies in a large area and stun them for a pretty long-ish time.

Cataclysm is a fast acting-attack but grants Fury temporary invincibility. It is basically a stronger version of the Rapture skill.

The Edge of Scorn is a Broadsword that can be split into two smaller short swords that can do rapid attacks easily.

The Broadsword itself is a slow sword that is able to deal massive damage just like the Mallet but is able to break itself into two pieces for a short period of time and deal devastating combos all at once.

The Edge of Scorn also has a passive ability to slow down its recipients with its freezing attacks. Though not all attacks will slow down/freeze their enemy, some of the combos may do so.

The Edge also deals a lot of heavy damage if you are only using the Broadsword.

Twin Blades
The Twin Blades can be activated by pressing the Y button twice. The twin blades are super-fast, as compared to the Broadsword, but offer a great deal of damage.

The Statis Hollow’s max combo is three hits but deals four hits because the Twin Blades is used in here.

The blue glow can be used to tell what enemies have been locked into space. Use this opportunity to get out of harm’s way and switch to faster weapon for a devastating multi-weapon combo.

Equilibrium Edge
The Equilibrium Edge can be used to counterattack any enemies in front of Fury. You can also dodge incoming attacks and throw the Edge of Scorn towards an enemy far away.

This attack will send a huge Arcane shock to an enemy and opening the enemy for further combos.

Wraith Attack – Statis Shield
The Stasis Shield can be used to cocoon Fury into an ice-hardened shell of armor that nullifies all incoming damage temporarily. And any enemy that touches her during this time will be slowed to a turtle’s speed.

The only downside to the Shield is that you cannot activate another Hollow while this skill is active.

Salvation is perfect for knocking enemies that are flying in the air. Salvation is a very slow weapon and offers not much damage though. However, a great utility weapon can be the closest thing to sharpshooting in the game.

You can aim at up-to 4 enemies per throw. Salvation can also interrupt enemies’ channeling abilities and stun them in their paths.