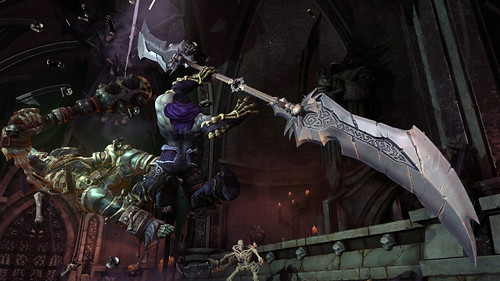 No-one can deny the importance of combat moves in Darksiders 2. Button mashing seems cool but it alone can’t help you, especially in the later stages of the game. If you want to truly become Death, you will need to read this Darksiders 2 Moves and Combos guide and master them all.

Death starts off with pretty basic combat abilities but with the passage of time, learns more abilities and unlocks more weapons and in turn, is able to unlock several combat moves and combos that can greatly enhance his offensive prowess.

Sticking to the basics is good but in many cases, a combo or special combat move can give a slight edge in the battle. Unlocking the moves will give you much-needed offensive power during boss battles.

You can learn these combos from a trainer for a price. They are expensive to unlock but well-worth the price at the later stages of the game.

Scythes are Death’s primary weapon. These blades actually are the only weapon possessed by Death until you get your first secondary weapon (See Legendary Items for more).

The range of moves and combos you can perform with Scythes varies from simple slashes to the dangerous Flip Saw.

On acquiring the reaper mode Death will gather some Reaper Energy on each successful hit landed by the Scythes.

Melee weapons are quite effective if you like to get up close and personal. Since they are light weight, Death’s attacking agility is not affected by them.

Darksiders 2 offers four types of these melee weapons: bucklers, claws, gauntlets, and tonfas. Refer to the table below for combos you can perform with these weapons.

Secondary weapons are massive in size and have the ability deal a huge amount of damage in a single swing. Although the weapons are quite slower than that of melee weapons or Scythes, you can use the combos to inflict heavy damage to the bosses.

However, there are also some alternative fast weapons that can be used as secondary, and they also inflict a huge damage.

These include arm blades, claws and gauntlets and can also be connected in combinations with scythes. But it makes them a little weaker with this combinations considering that the speed is actually increased a lot.

It will be nicer if you use these weapons in combination with Scythes. Start-up with a couple of blade slashes leading to the secondary-weapon combo giving your enemy no time to defend itself.

Consisting of axes, hammers, maces, spears and bucklers, heavy weapons like such are considered slower but the damage they inflict is surely heavier than any other. In comparison to the scythes which might inflict damage in range of hundreds, heavy weapons deliver damages in thousands.

Death also has the specialty to use both his primary and secondary weapons to perform some devastating combos.

Weapons aren’t the only tools to kill for Death; he possesses special abilities, which can be used to surprise the enemies.

Reaper form is a good example.