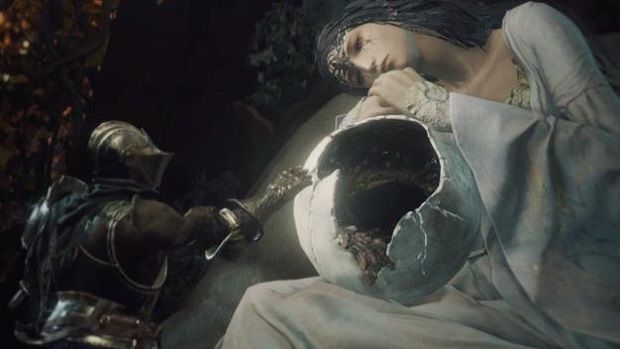 A recent Famitsu article may have just dropped a number of Dark Souls 3: The Ringed City DLC details, such as enemies, notable NPCs, and even, possibly, a few story points. The Ringed City is supposed to be Dark Souls 3’s final DLC, and will take players the often-alluded to city of Londor.

There isn’t really any clear information, mainly being captions or descriptions of various characters.

These include allusions to angels (also alluded to in the main game as servants of the Holy Mother Gertrude), an armored knight that’s lost his memory, an ashen giant, and a sword made out of the Chaos Flame, a source of Chaos Pyromancy.

Londor, in terms of Dark Souls lore, is the home of the Sable Church, and the homeland of characters like Yuria and Yoel from the main game, and Sister Friede from the Ashes of Ariandel DLC (who is also Yuria’s elder sister).

Now, the Ashen One must travel to it as you pursue Gael, the person that trapped you in the Painted World of Ariandel in the game’s previous DLC.

Also included in the Dark Souls 3: The Ringed City details are more lore surrounding a monster known as the Abyss Dragon.

If you’re the type to read the gear descriptions, you might have seen that name before. The Abyss Dragon is a monster that was previously fought by the Millwood Knights from the Ashes of Ariandel DLC (the guys that look like giant Vikings).

More details include a woman named Filianor (the woman seen holding a stone ball in the DLC’s trailer), at least one outfit (Knight armor from the Age of the Gods), and another monster that appears similar to the Pilgrims (the winged things you can see when you’re up in the higher levels of Lothric Castle).

We’ll likely see more Dark Souls 3: The Ringed City DLC details in the future, before it comes out on March 28 on Xbox One, Playstation 4, and PC.