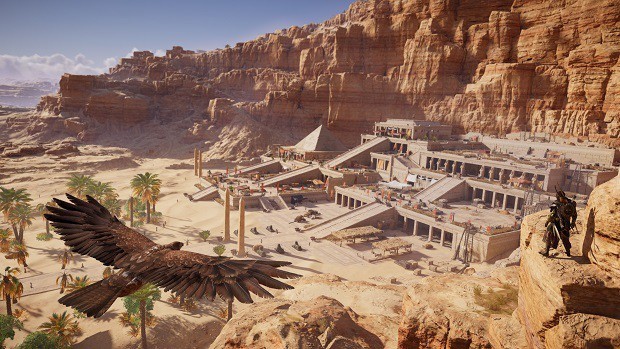 Since the new DLC is out now, there are many new side quests for players to do. These new Curse of the Pharaohs Optional Quests are different from the ones usually found in Assassin’s Creed as they offer you quite a lot of experience along with some very amazing rewards such as Legendary Weapons, details on characters and new mounts for you to try.

This Assassin’s Creed: Origins Curse of the Pharaohs Optional Quests Guide will give you a comprehensive overview of all of the side quests currently found in the new DLC so that you can complete the quests without a hiccup and get their rewards for yourself.

Let’s go ahead and take a look at our Assassin’s Creed: Origins Curse of the Pharaohs Optional Quests Guide. We mention where the quest is found along with how to complete the quest. At the end, we also mention the reward of the side quest so you can decide whether or not the quest is worth trying.

There are quite a lot of side quests found in the game right about now. We have still not found all of them and we will continue to update this guide as we find new information.

The Thebian Triad
This side quest is found in Theban. Go to the temple of Karnak to speak to the woman. Then head to the investigation area and get the clues. Follow the clues to find the thief towards the bottom of the hill. When he gives you the new objective, find the man and kill him to locate the statues and return them to the lady. Your reward for this quest will be 7,500 XP.

Master of the Secret Things
Go to one of the Fast Travel Points in Thebes and speak with the woman to get this side quest. Free the hostage in Luxor Barracks and then track down the scrolls at the objective marker.

Beware of lions at your next objective as you scout the farm for clues. Once you discover that the bandits have stolen the scrolls, go to the new location and kill them to get the scrolls.

Idol Hands
Find the quest near the shore in Theban Necropolis. Get to the man near the statue but kill all the crocodiles before you do. Next, head to the objective and clear out the bandits to take the statue. Once you have the statue, take it back to the priests and kill all the lions to finish the quest.

Burnt Offerings
Go to the Necropolis and speak to the lady near the graves. Next, make your way to the marked tomb and then investigate the area before finding the Blacksmith. Clear the bandits and rescue the Blacksmith. After this, go to the Pillagers’ Hideout and locate the corpse. Get the amulet from it and return to Raia to finish the quest.

Drowned Tools
This quest is found in the Theban Necropolis. Speak to the man and then kill the guards. Now follow him for a while before scouting the nearby area for 3 different sets of tools. The reward for this quest is 8000 XP.

Losers Weepers
Talk to the man near the boat who will tell you about his distress regarding losing all of his instruments into the dark depths. Use Senu to locate all the instruments found under water, and retrieve them. Once you have all of them, return them to the musician for 6000 experience points as a reward.

Fish Out of Water
This quest is found in Yebu Nome. Go to the Moon Curser Village to talk to the injured man. Move over to the next objective and continue doing that until you get to Papyrus Estate. Here, you will have to go to the Ship Construction Yard to kill the Steward and get 7000 XP.

Laid to Rest
This is once again a follow up on the last quest. Return Dennu’s ring to him in Aaru. Go to the tomb of Queen Nefertiti to get to Aaru and complete the quest. Your reward will be 5000 XP.

Crocodile Tears
Go to the location and talk to the Sobek worshippers. Use Senu and scout the area to locate an injured warrior nearby. Take care of the enemies around the warrior, and take the hunter back to find out that the Captain has escaped, hiding out in the Swenett Outpost. You will gain 6,000 XP points once you take him down in the outpost.

National Treasures
Go to Swenett Outpost and free all of the prisoners. Go to the ambush site and inspect the area for clues. Use Senu to search for a suspect horse with a dead body on its back. Take down the horse and find the scroll by looting the body. Return it to Kanika, and follow her into the cave to find two legendary weapons namely, Legendary Dual Swords and Daggers of Tutankhamen.

Unfair Trade
After completing Blood In the Water, after you have reached the Speak with Tahemet step, you will unlock the side-quest ‘Unfair Trade’. Talk to the mummy in the tomb and the side-quest will start. Go to the nearby island and locate the Strategos which will reward you with a Legendary Scepter.

Valley of The Kings

A Sister’s Vow
This quest is located in the Valley of the Kings and is a follow up to the previous quest. Go to the Tomb of Akhenaten to get the quest. After that, exit the tomb and go South West to Tutankhamen’s tomb.

Love or Duty
This is an Afterlife side quest found in Aaru. Speak to the man near the House of Threshed Grain and then get into the marked tomb to lead the Lodge of Names. Smash the jars at the next objective and then head to the Palace marked on your map to use the Brazier.

Now, follow the Ren so that you can kill the Anubis soldier that it transforms into. Your reward for this quest is 5,000 XP and Travelers Curve Legendary Bow.

Gods or Creed
Free the prisoner from his cell and take him to the temple; back to his home. Talk to Khui once you’re here and you will unlock three quests namely, The Cat, The Ibish and The Hawk quests. You will now have to consequently, complete all of the story quests in Aten, and after finally defeating the Pharaoh, talk to Khui again for a special reward.

The Cat
You will have received this quest during the Gods or Creed quest. The statue of Bastet can be found on the marked location, simply use Senu to locate it.

The Ibish
Find the second statue in the same way you tracked down the statue of Bastet.

The Hawk
This will be the final statue you will be required to locate, before you can finally finish collecting statues, and head back to return all of them.

Shield or Blade
The Shield or Blade side-quest is the only one in Duat, complete all of the marked objectives (Rather simple), and you will be rewarded with a legendary outfit