Cuphead Review, A Blast from the Past 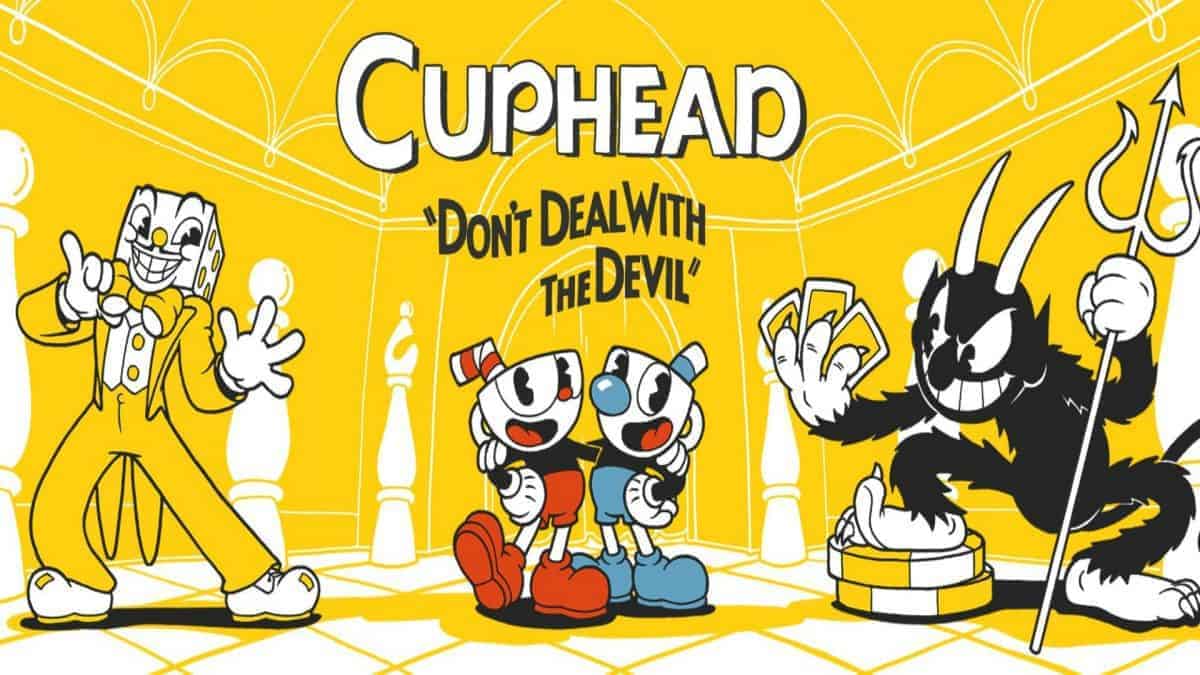 Ever since its reveal at Microsoft’s E3 2014 press conference as a part of a lineup of indie titles being developed for Xbox One, Cuphead immediately made quite an impression on the audience with its novel art design and vintage aesthetic.

At first Cuphead was reported to be a game with limited scope and essentially a flashy boss rush game. It was then rumored to have gone through development changes to incorporate traditional action and platforming levels to the game, which lead to several delays. And after more than 3 long years of wait, the game has finally arrived on the Xbox One and PC.

Now that players are able to get their hands on the game and experience it in its entirety, the question arises whether it was worth all the wait or was it just hype create by games media? Is it just a one trick pony? And do its visuals really stand out in play?

Let’s just get the obvious out of the way; Yes, Cuphead’s visuals really stand out. In fact, the videos and presentations don’t do justice to how the game looks in play. Studio MDHR has done a remarkable job bringing the vintage early 20th century animation back to life and seamlessly merging it with old-school mechanics from the classic era of games in 1980s. 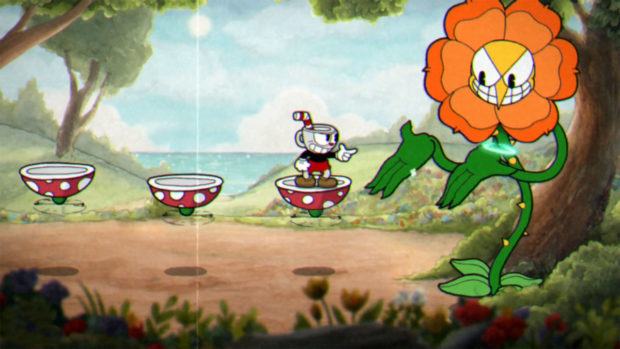 Cuphead features heavily stylized visuals that directly pay homage to the golden age of American animation, an art style that hearkens back to the famous 1930’s and 1940’s cartoons like Popeye, Betty Boop, Felix the Cat, Silly Symphony and Merrie Melodies.

Artists at Studio MDHR accomplished this by utilizing authentic techniques from that era of animation; which means they put huge effort in painstakingly hand drawing the designs and inking the characters, then animated their work via traditional paper based cel animation, and created actual watercolor paintings to act as the game’s backgrounds.

The result of all this hard work is a breathtaking art style that not only looks right at home with the designs of the vintage era cartoons, but looks amazing in motion with its buttery smooth animations that look just like the high-production value Disney animated films of the past.

What makes all this stand out even more is the fact that Cuphead’s art design is met with an equally dynamic and creative character designs, ranging from innocuous NPCs like Elderly Kettle and a Fisher Fish to enemy bosses like Fighter Frogs and a Shape-Changing Blimp. These varied and inventive characters make sure that the novelty of this 1930’s art style never grows old and doesnt out stay its welcome.

Rounding out its remarkable presentation is Cuphead’s fantastic sound design that perfectly complements the retro-animation visuals with music that hearkens back to 1930s and 40s. It features classic ragtime music performed via a big band ensemble of saxophones, trumpets, trombones mixed in with piano keys, drums and little bit of strings, to produce music that is a blend of smooth Jazz and peppy Latin Mambo rhythms. 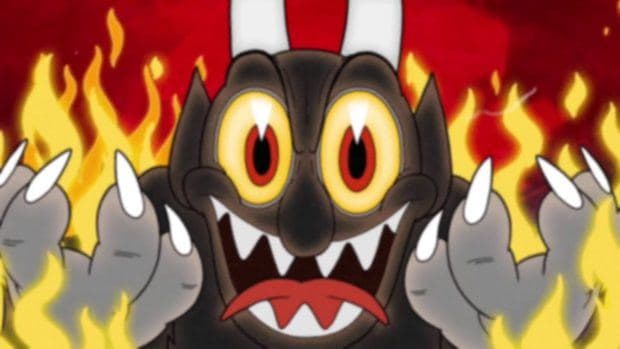 Cuphead is a 2D side-scrolling action game that features shooter gameplay in the vein of Gunstar Heroes, Contra, Metal Slug and other classic run-and-gun games. The game features a 16-bit RPG-esque overworld that is home to different levels and boss battles that, when completed, open up path to similar stages for players to progress further in the story.

Game’s story revolves around the titular character Cuphead and his brother Mugman, who are tasked with collecting the souls of different boss characters across the world of Inkwell, in order to pay off their debt to the devil.

While it acts as a common thread the binds the game’s presentation and gameplay together, the story in Cuphead is not its main focus and is more of a tool to provide bare minimum motivation and context behind different boss battles encountered in the game.

Cuphead features a simple control scheme, with one button for jumping, one to dash, one to shoot in 8 different directions and one button for special moves/shots that consume an EX card, which is earned slowly via each successful normal shot or fast through a successful parry, which can be done on select projectiles under not-so-strict timing.

The player is expected to master these abilities quite quickly to stand a chance in the Boss Battles, that comprise 70-80% of the game’s content and are the meat and potatoes of the gameplay in Cuphead. 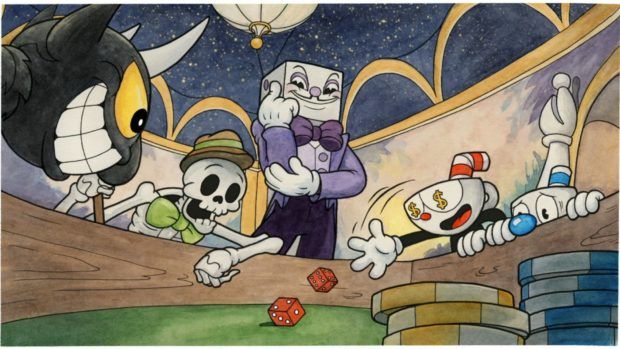 Cuphead features dozens of Bosses that come in all shapes and sizes. Each boss character is featured in his/her/its own stage, an arena where the player fights the boss one on one. Depending on the boss, the size of these can range from one screen to a constantly side scrolling stage.

The goal of each encounter is to shoot at the Boss character until its energy is depleted, during which the players are expected to avoid incoming fire, obstacles and projectiles thrown at their way, as Cuphead only has 3 HP, allowing players only 3 mistakes per try.

While these Boss characters’ attacks can easily be telegraphed, what makes each encounter a challenge is that each Boss character has several phases where it not only changes its physical form after taking certain amount of damage, but also mixes up its attack pattern, keeping the fights from turning predictable and always keeping players on their toes.

Many boss characters also have attacks that create smaller enemies within the arena. This can cause trouble when left unchecked, as the movements and attack patterns of these smaller enemies, combined with incoming fire and attacks from the Boss itself, can create overwhelming number of obstacles to contend with at the same time. 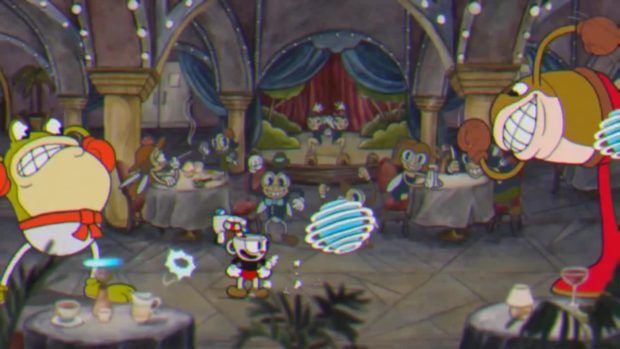 Thankfully the game is not merciless in its challenge and allows players to collect and create a loadout out of handful of different shooting weapon types, Charms that provide character buffs and even a couple of powerful Super Arts that can be activated when the EX cards are filled up.

While the Supers are unlocked by completing hidden levels, the weapons and buffs can be purchased with coins hidden throughout a handful of “Run and Gun” platforming stages that are sprinkled across the game’s overworld.

These run and gun levels feature traditional side-scrolling platforming in the vein of Mega-man but with less emphasis on precision platforming and more on avoiding enemies and projectiles. The objective in each of these is to reach from the start of the level to its end, all the while trying to collect the gold coins placed throughout each level.

And while there are not too many of these side-scrolling platforming levels in the game, they do a good of keeping things fresh by providing change of pace and a different type of challenge from the Boss Battles. However, the game could have really benefited from more of these types of levels as they are quite creative and feature solid jumping mechanics which are not too tight, not too floaty and are just spot-on.

Cuphead also could also have worked as a really good handheld game, as both ‘Run-and-Gun’ stages and Boss Battles are bite sized levels that take 2-3mins to complete when done perfectly. The game is built and designed in a way that it is just asking to be made into a Switch port which would fit perfectly within the system’s library. 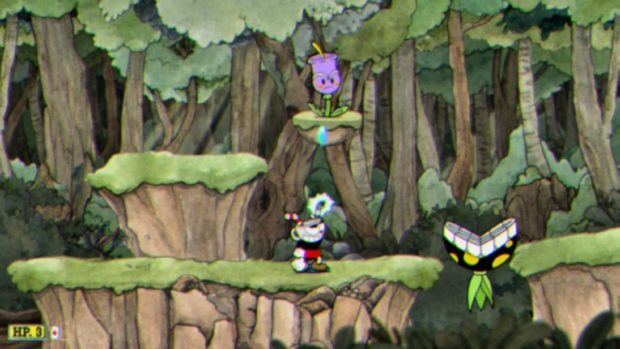 A lot has been said about the difficulty of this game. Sure, the games strict ‘3 strikes you’re out’ approach, coupled with the screen filling, bordering on bullet-hell, obstacles make the challenge frustrating at times, however the game contains that “Just one-more-time” factor that motivates players to develop reflexes, get their timing right, learn enemy patterns and get better with each try.

As long as the players don’t rush down in frustration, they will realize that for the most part Cuphead is unforgiving but fair. However, this does take a turn near the very end where the game falls into a familiar trope used by old games as a way to spike difficulty and elongate penultimate part of the game before the final showdown.

Cuphead actually allows players to select an easier “simple” difficulty before each Boss, however defeating a Boss on easy does not net the player the soul needed to progress through the story. The game’s main campaign can last anywhere from 9-15 hours, depending on the number of retries taken on each level and how quickly the player figures out enemy patterns.

The whole campaign, each level and boss in Cuphead can also be played with a friend via local co-op where there is no split screen, players share a screen and are bound together, unable to explore separately. Playing co-op doesn’t make the game anymore easy or accessible; it creates a different sort of challenge where the bosses’ health is scaled higher but players can continually revive the other player by timely parrying their ghost.

Additionally, players can also spend some time exploring the overworld for some minor secrets, they can unlock a faster “Expert” difficulty upon beating the game, they can replay levels to get achievements for the ever-elusive perfect runs for every stage and boss, as well as complete some secret quests that unlock couple of graphic filters for even more vintage visuals. 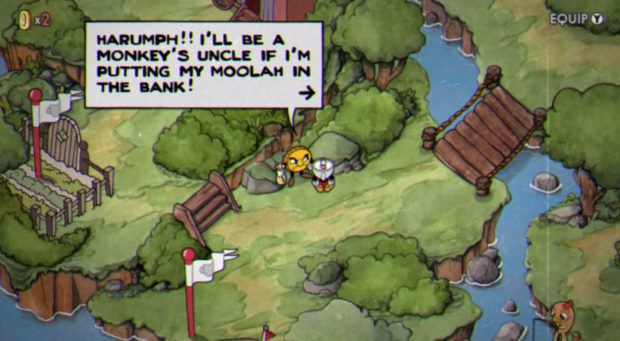 At the beginning of the review I asked whether Cuphead was a One-Trick Pony, and the answer to that is yes; yes it is. But the visual trick it performs is unique, delightful and amazing, and it is coupled with gameplay that is engaging and above all – fun; and for a $20 game that is more than enough.

Sure, the game does not break any new grounds when it comes to its gameplay and mechanics, but it is also not an all accessible time-waster either. If you are looking for a game with deep and varying game mechanics then you should look elsewhere, as should any impatient players that only want a stress relieving all-out action experience.

With its offering of addictively replayable levels, ability to locally co-op and loads of unlockable items and secrets, Cuphead is a game packed with value for anyone who is enamored with the unique art style that perfectly mimics classic-animation from the vintage era of American cartoons, and relishes challenging boss-battles that necessitate learning enemy patterns and overcoming the odds.

Cuphead is a game that is simultaneously an ode to the golden age of western animation as well as an homage to the golden age of gaming. It’s blend of unique visuals and addictively challenging gameplay provides an overall experience that is amazing to look at, fun to play and filled to the brim with charm and personality.

Makes you wanna kill yourself... I love it!