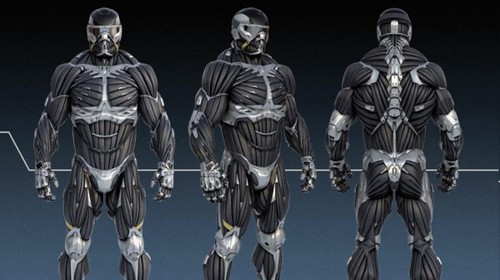 Your custom loadout in Crysis 2 offers 3 types of modules you can add to your Nanosuit, and these are: Armor, Stealth and Power.

Each come with its unique strength and weakness, which one to select is purely a matter of how you play the game.

Crysis 2 Armor Nanosuit module deals with protection of the player from the enemy players or environment.

Air Stomp III
Perform a powerful downwards attack when in the air. Looks good on the eye, but very hard to pull (Probability of dying in the air against players with good aims) though can be a good surprise.

Threat Tracer III
Highlights Incoming Bullet Paths. You can easily back track enemy players; especially snipers if you opt to use this module. Very handy in foliage environment where it is very difficult to keep track of enemy snipers.

Proximity Alarm III
Automatic Warning When Enemy is Nearby. Can be annoying at times, since it keeps on reminding you about the enemy and the frequency increases with upgrades but very handy perk for a camper.

Upgrade II
Increased Warning Frequency when an enemy is nearby.

Upgrade III
Maximum Warning Frequency when an enemy is nearby.

Armor Enhance III
Reduces Drain Speed of Energy when in Armor Mode. Reducing the drain speed energy means you will able to use the Maximum Armor mode for longer period of time. Second Upgrade provides the necessary movement bonus.

Detonation Delay III
Delays the detonation of nearby Grenades. Not much useful since if you keep your ears open, you can actually hear the grenades falling nearby and always have enough time to avoid these.

Energy Transfer III
Restores Nanosuit Energy with each Kill. Again something I would rather not use simply because your Nanosuit energy regenerates automatically though slowly. You can sacrifice those few seconds recovering the Nanosuit Energy for a better Nanosuit Module.

Crysis 2 Stealth Nanosuit module deals with infamous stealth mode. There are different options available to you that enhance your Nanosuit’s Stealth.

Stealth Enhance III
Faster transition in and out of stealth mode. That can actually help you a lot in creating the distraction and getting the kills. Especially with Upgrade II you become clearly invisible; hard to spot on while the regular stealth mode only works well in range, very easy to spot anyone in stealth mode nearby.

Good for assaulter/camper – who likes to take his time and move from cover to cover. If you are going to run-and-gun anyway, avoid this.

Upgrade III though handy but Less Visible is not good enough. Upgrade III makes it worthwhile since footsteps are key to your success in successfully protecting yourself.

Jammer III
Scrambles the radar of enemies within range. You will be radio silent more like hidden from enemy. Few easy kills if enemy don’t anticipate someone nearby, they would come blindly. It depends on you to use this perk effectively.

Upgrade III
Scrambles the radar of enemies within an increased range.

Tracker III
Highlights the footsteps of the nearby enemies. Highlighting doesn’t actually works well and can easily confuse. Don’t follow the footsteps, you will get into trouble. Upgrade II can make it worthwhile showing the enemy routes but it can also turn into a trap.

Cloak Tracker III
Identifies whereby nearby enemies enter stealth mode. You can track nearby enemies in Stealth Mode, and kill them off. This perk would identify even those with no shadow cast.

Upgrade II
Increase the visibility of the cloaked enemies.

Visor Enhance III
Highlights enemies through weapon scope. Not useful enough, unless you can’t see properly and have to rely on glasses just like me.

Side Pack III
Allows an additional magazine of primary ammunition to be carried. Rather practice with your secondary and look for the guns on the battlefield.

Upgrade II
Allows an additional grenade or explosive to be carried.

Point Fire Enhance III
Reduces the spread of Primary weapons when shooting from the Hip. Steady Aim – helps with Sub Machine Guns to start with. If you don’t like to aim down sight, this perk can actually come in handy.

Upgrade II
Reduces the spread of secondary weapon when shooting from the hip.

Upgrade III
Reduces the spread from mounted weapons when shooting from the hip.

Aim Enhance III
Decreases weapon recoil when aiming down sight. Weapon Recoil will keep the aim steady but you can learn to control the recoil or fire the weapon in burst and use some other perk instead.

Weapon Pro III
Faster Weapon Reloading. Can help in panic situations when you just fire the whole magazine and have enemies still in front of you. But That’s that.

Loadout Pro III
Allows an additional Primary Weapon to be carried in place of secondary weapon. Good deal for kill hungry Cryplayers in the wild.

Mobility Enhance III
Reduces energy drain from sprinting and jumping. Again this perk’s effectiveness depends on how you play. If you cautiously approach the battlefield, this isn’t for you.

Remember, only use those Nanosuit Modules that complement your gamestyle.