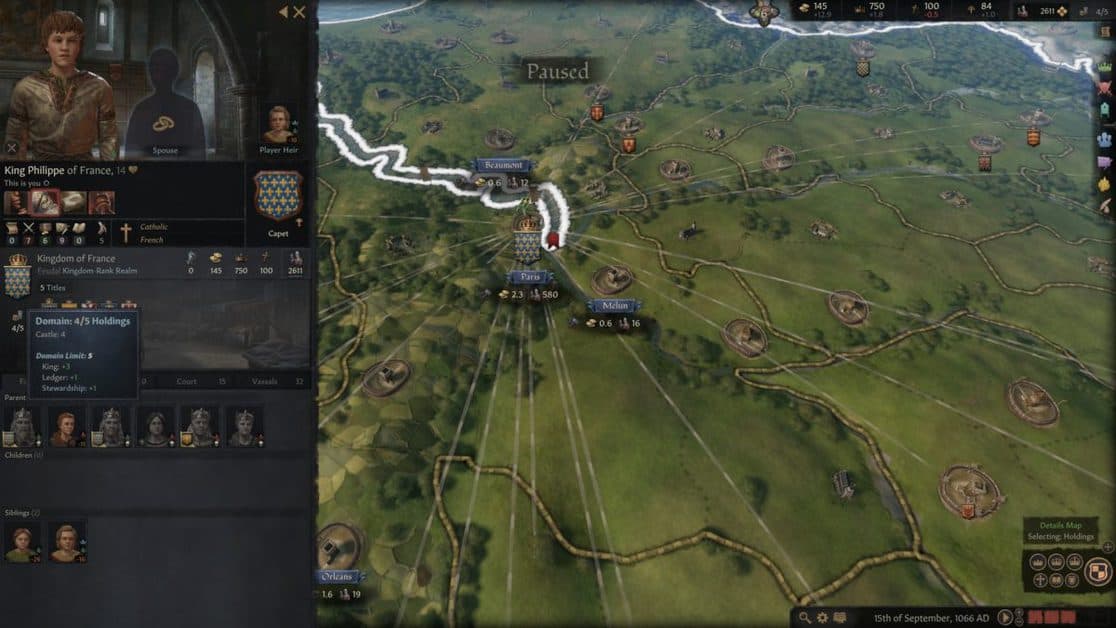 To understand the economy of Crusader Kings 3, you need to know certain basic concepts.

For the territories that lie under your domain, you only control the castles. The rest, including cities and temples, are looked after by vassals.

Vassals will pay you taxes for keeping that land, and though it’s not recommended, you’ll be able to invest in their lands.

Castle is the building that rules the entire country, and either you or a vassal get to be in charge of it.

If it’s you, you’ll get all of the income the Castle generates. Else, you’ll receive taxes from the vassal depending on several factors.

Gold on hand is how you build new holdings or invest, while Gold per turn is how you expend on your armies for each turn they’re active.

Finally, whenever your character dies, his wealth will be transferred to his heir.

Collection of Taxes
The principle of taxes is pretty simple in Crusader Kings 3 – as your realm grows more and more, the collection of taxes increases along with it.

You can check out the taxes for each of your holdings in the Domain tab.

For checking out how much each of your vassals is taxed, head to the Vassal tab.

The important thing to note here is that the religion, culture, and characteristics of each vassal also determines how much money you get.

There’s also an option in the Councilor Menu for your Steward, called Collect Taxes, which you can select to increase the tax rate by a certain percentage.

Furthermore, if your spouse has a high-rated Stewardship skill, you can also make them help you with the Stewardship as well.

This will result in tax gains, and you may also get your hands on some hefty piles of cash.

Religious Holdings
In the case of religious holdings, you will only get taxes if the Religious Head of a certain holding thinks of you as a good person.

If any of the Religious Head has an opinion of you that is negative, then you’ll need to find ways to change that. Otherwise, you won’t be getting the amount of cash that you desire.

Starting a Sway Scheme is one of the ways.

Type of Government
Your Government Type also has a pivotal role to play in the collection of taxes.

For instance, if you’re a vassal, you’ll need to hand over the amount of money agreed in the contract signed with your liege. This amount of money can vary depending on multiple factors.

Similarly, in the case of a Tribal government, the taxes collected from the vassals are dependent upon the reputation of their liege, while for a Clan government, it depends on how high a vassal thinks of his liege.

Wars
What many players don’t take into account is that while going to war can be costly, you can earn a lot more if you come out of it as the victor.

Apart from the Holy Wars and Crusades that rewards on with piles of cash on a good performance, besieging holdings and overcoming battles also give you coins and boost your prestige.

Moreover, you can also help your liege and thereby, earn a chunk of his profits.

Another important thing is that you always try to take VIP prisoners as by ransoming them later, you can raise a ton of money.

Raiding
One of the best ways of obtaining some quick cash is to raise your levies as Raiders.

For this, navigate to the military menu and press the button near the top. Now, given that you fulfill the prerequisites to do so, you will be able to send your troops to the nearby territories to lay siege to them.

After the siege had ended, your troops will bring home considerable loot for you.

Construct New Holdings and Improve the Older Ones
Although making improvements to your baronies, counties, duchies, kingdoms, and empires comes at a cost, it is profitable for you in the long run.

To improve any of your holdings, click on a territory with a holding; you’ll see a ‘+’ icon near the bottom of the panel, indicating that there are opportunities for improvement.

Tap on the icon to prompt the display of the menu containing different possible improvement and their effects.

You’ll also be able to update existing improvements given that your culture’s technology level is high enough or you have a new idea in mind.

Other than that, to further increment your monthly income, focus on building new holdings in the territories that you own.

To create a holding, click on an empty territory under your possession and then tap on the ‘Construct New Holding’ button in the resulting information panel.