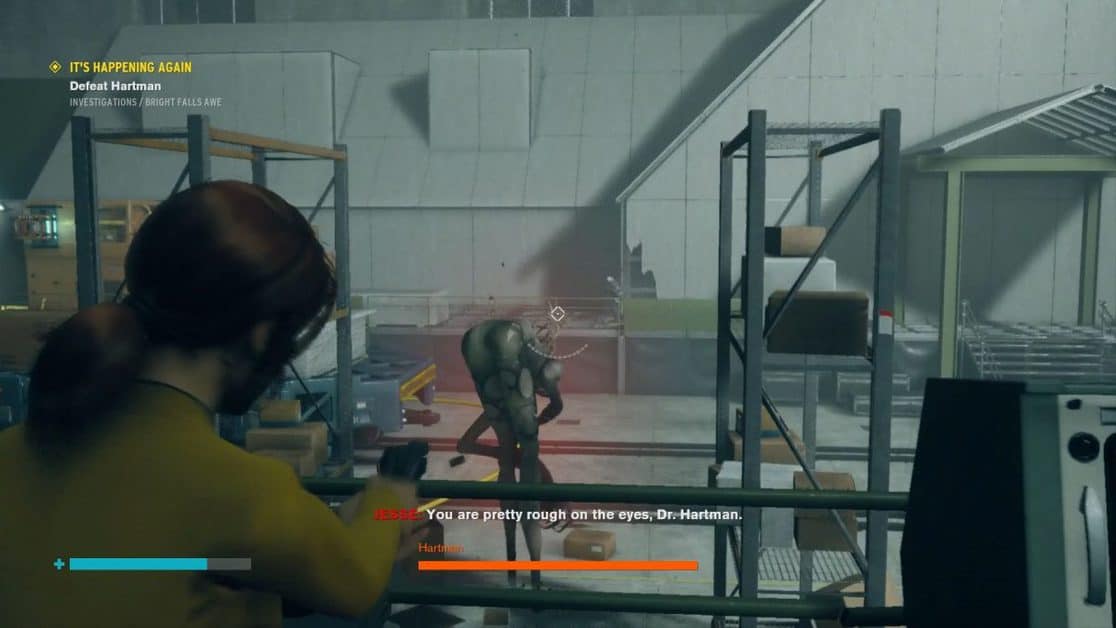 In the AWE expansion for Control, you will go through the two main story quests A Dark Place and “The Third Thing” before you reach the next quest “It’s Happening Again”. The Control AWE It’s Happening Again quest is about going to the Bright Fall area and finding Hartman.

We have this detailed guide to walk you through this whole It’s Happening Again quest and through the boss fight with Hartman at the end. So, let’s get into it.

The quest will be triggered when you are done with the third thing quest and get back to the Active Investigations area.

When the quest starts you will get the task in which you have to Find Hartman who is in the Bright Falls Area.

As you can see the Intercom in your front, get behind that intercom and you will find the entrance to the next area.

Use Elevator from here to go down but after some time the elevator will get stuck.

Here you have to remove three darkness pieces that you will find when you get out of window and use the floodlight.

Then you will have to fight some Hiss that spawn right next to the elevator. When you get rid of every problem, get in the elevator again and go down until you reach the last floor.

When the elevator stops, get out and go to the control point. Now for once, make sure that you have complete hp and powerups and then get to the room ahead.

Here you will have to pull a rope and you will be able to get back to the Oceanview Motel.

Inside the Oceanview Motel you will get some dialogues with Alan Wake and then just reach the front desk of the motel and ring the bell you see on the counter.

Then go to room 224 and again ring the bell and turn on the table light.

Then go to room 226 and do the same but in this room, you will see a projector, turn it on and then get back to the main area.

Now you have to ring the main desk bell for the one last time, and then you will have to go to this room which has some triangles on the door.

Inside the room you will see a rope, you will have to pull this rope three times. Now you will have the boss fight waiting for you when you get back to the active investigations area.

This time, the area will be dark as there will be no power and you will face the Hartman here.

Now get ready for the boss fight. But first, you need to turn the lights on and recover the power.

To do so, you will have to find the power cores that are scattered in the area and put them into the power sockets in the same area.

When you place all four power cores in their places, then push the activate button that is on your right and the power will be back and the boss fight will start.

It is going to be a very simple fight and you won’t have hard time facing Hartman.

Just go all out from the very start of the fight and use multiple abilities and keep cycling between those abilities to get a good start at the fight.

So, the basics of attacking will be the same in this phase of the fight as well but there will be one thing that the Hartman will do differently.

After some time he will jump hard on the floor which will knock two of the power cores out of their sockets and when the power is out the Hartman will gain health.

Now you have to be very quick with putting those power cores back into their sockets so for the next phase you should stay close to those power sockets.

You will just have to repeat the process until you are done with the boss. Once you have defeated the boss the quest will be finished.

Now, this is the last main story quest of Control AWE DLC. Now you do have some side quests in the DLC as well so make sure to check them out as well.