Cars 2 is Twisted Metal For Kids 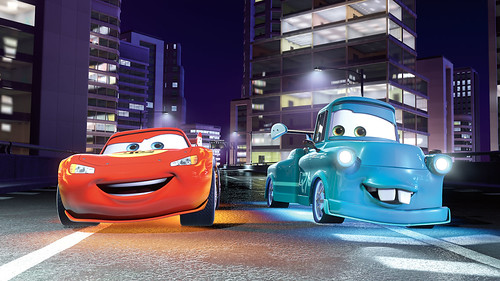 Cars 2 is a arcade driving by Disney interactive for ages 5 and up.
Little is known about the story so far, but it looks like it will closely follow the film. There’s an underlying spy theme running through the whole game, a basic training mission will begin as you start the game that involves learning the controls of the game,steering, doing jumps and tricks, drifting, boosting, and much more.

Completing the missions well earns you points, which will fill up an experience meter that can be used to unlock new missions and car skins. The best part about the demo was hearing actor Michael Caine’s voice giving curt, beautifully sarcastic instructions.

A quick race was shown in the demo in which Lightning McQueen demonstrated the kinds of moves you can expect in an arcade racer: drifting, boosting, double-boosting (which requires you to build up your boost meter and creates a bright orange glow around McQueen when used), and lots of car-related racetrack sounds (cars smashing into each other, gears shifting, and wheels braking).

McQueen can also do plenty of tricks: pressing up on the thumbstick will see him go up on two wheels, while pressing down will see him drive in reverse. He can also do air tricks and barrel rolls, which help to fill the boost meter while racing.

Another mode was shown in the demo called Attack in which you must race around a track and use various weapons lying around to defeat all the other cars in the race. Something like Twisted Metal.

Weapons like rocket launchers, machine guns, things that shoot fire, things that explode can also be found. Each car destroyed successfully earns you more time on the track and experience points and it continues. Cars 2 looks a cool concept for kids and it would be interesting to see how it shapes up. It will be released for Playstation 3, Xbox 360, Wii, PC and Nintendo 3DS on June 21, 2011.