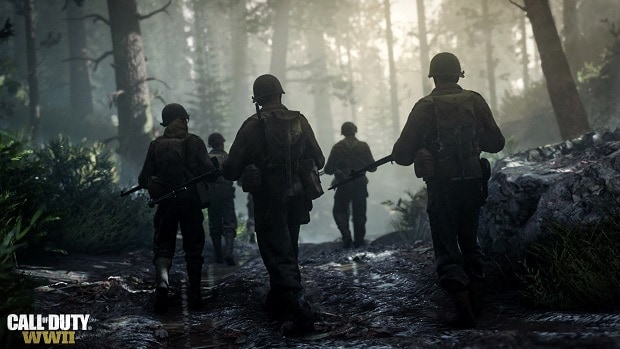 The Division system is sort of like Infinite Warfare’s alliances. This Call of Duty: WWII Divisions Guide will give you all the details you need to know about the specific divisions and how they differ from one another. Remember that each division has specific loadouts that are not set in stone and they have specific traits that are exclusive to that division.

For more help on Call of Duty: WWII, you can check out our Training Perks Guide.

Our Call of Duty: WWII Divisions Guide details all about the different Divisions, understanding them, and more.

These guys are run and gun players. Their Division Skill is the SMG suppressor and the Primary Weapon is the Grease Gun SMG along with the P-08 Pistol as their Secondary Weapon.

The heavy gunners are labeled as Armored in this game. They are able to stomach a lot of damage and carry a lot of ammo. Their Division skill is LMG Bipod with the LEWIS LMG and P-08 as their weapons.

The snipers, or simply put the guys who will kill you again and again. They have the Sniper Sharpshooter Ability as their Division Skill and Karabin Sniper Rifle/P-08 as their weapon combo.

These guys are equipped with explosives so watch out for them charging the frontlines or be one yourself and wreak havoc in the enemy trenches. The Shotgun Incendiary Shells is their Division Skill, Winchester 1897 is their Primary Weapon, and M1 Bazooka is their Secondary Weapon.

That is all the detail we have on the divisions in Call of Duty: WWII right now. Let us know if we missed something in the comment section below!