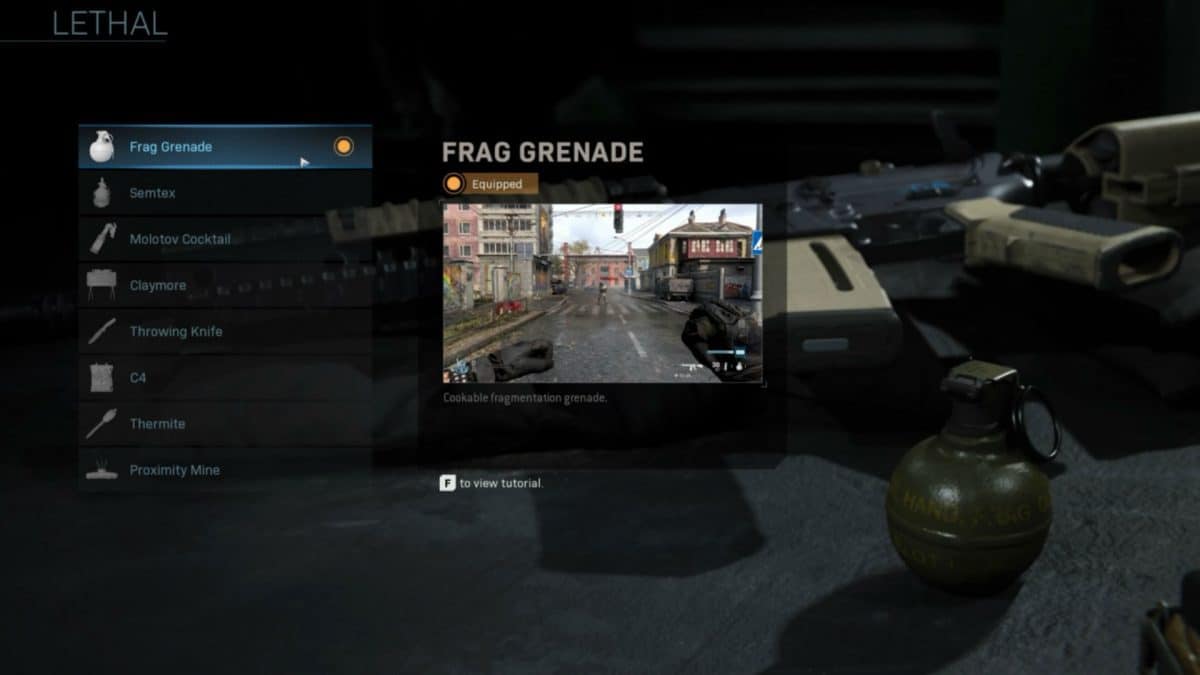 Veteran Call of Duty players might be familiar with the concept of equipment for lethal and tactical usage in their loadout but the system has been a bit changed now and there is no more equipment when deciding which to take in the field with you.

Before getting to our picks for the best equipment from both sub-categories, let us first go over each piece of equipment and their explicit purpose:

Frag Grenade: An item that can be tossed in any direction, and will explode after a few seconds.

Semtex: Similar to the frag grenade, however, these have the added attribute of sticking to whatever they’re thrown at.

Molotov Cocktail: A projectile that explodes on impact and causes a small fire.

Throwing Knife: A knife that can be thrown and later retrieved.

Claymore: A mine that can be placed in an area of your choosing, trigged when an enemy comes into the vicinity of the mine.

Proximity Mine: Similar to the claymore, however, this one is triggered once someone puts pressure on it.

C4: A remote-controlled explosive that can be planted on any surface.

Thermite: A substance that can be attached to walls; will explode and burn fiercely once pressure is applied.

Stun Grenade: An item that has the ability to stun and stagger the enemy, reducing their movement and impeding their aiming capabilities.

Smoke Grenade: Covers an area with a smoke screen that hinders all ocular senses.

Stim: A stimulant that has the power to cauterize a wound.

Gas Grenade: Explodes once it makes impact; releases gas which has the effect of slowing down enemy movement, inducing coughing and blurred vision.

Heartbeat Sensor: A consumable that heightens your senses and lets you pick up a nearby enemy’s presence.

Snapshot Grenade: A standard grenade but one that lets you catch a glimpse of the enemy within the blast radius

While there might be a total of 16 pieces of equipment at your disposal, you can only take two with you, one from each category so deciding which equipment is the best is extremely important. Due to that, we have compiled a list for you given below with the best equipment from each sub-category.

Frag Grenade: there is nothing as reliable as a frag grenade. Capable of being thrown to great distances, having enough of a blast radius to kill multiple targets, and, with proper timing, could be handled in a way that does not give the enemy any breathing room.

The most effective way to use this is to target areas that often have people passing through, or to throw it into rooms you know are occupied by the enemy. The speed in which the grenades go off often catch the enemy off guard, so always hold onto the grenade for a brief second before throwing.

C4: One of the best pieces of equipment to use in a congested and dense area. If you come across an area that will certainly have many people going through it, plating a C4 there will most assuredly get you several kills. The beauty of this is that you are in full control; you decide when and where it goes off – if you were to surreptitiously plant the C4, you can be assured that you will kill a few stragglers.

Plant C4 in areas where the enemy is likely to pass through; set up a vantage point and wait for the unfortunate soul to pass by.

Claymore: This item can be planted down like the C4, but you are not control of the timing of the blast, which is dependent entirely on the enemies’ movement. What makes this such a powerful tool is the large blast radius and the fact that it can be planted so very quickly.

If you are being hounded by enemies, planting a claymore behind you will most likely kill your pursuers or ward them off. The claymore is the perfect equipment for players who expect the chaos of the battlefield to deter the use of other equipment.

Flash Grenade: Something that comes in handy in a pinch, this grenade will completely confuse and petrify your enemies, giving you the room to either escape or attack. What makes it such a useful item is the fact that it can be used on the fly; you can VERY quickly equip and throw it, taking less than a second to do so.

The swiftness of the action is what gives you a fighting chance when in a dubious and precarious situation. If you’re suspicious about whether a room is currently occupied by an enemy, preemptively throw a flash grenade in and rush any would-be assailants.

Smoke Grenade: This isn’t particularly useful in every situation, it is primarily meant for situations in when you or your team are under fire from a barrage of bullets and need some reprieve. The smoke grenade will give you a brief window of opportunity to escape a dire predicament unscathed.

Heartbeat Sensor: In large maps, knowing the enemy’s position is paramount; you need to know whether there’s an enemy waiting around every corner and bend.

You shouldn’t be afraid to explore any alcove or hidden area, but being aware of the possibility of a potential enemy waiting for you can prevent you from venturing into areas you desperately need to go; the heartbeat sensor allows you to move more freely, allowing you to chart courses that avoid conflict and give you the space you need to plan an offensive strategy or a counterattack.

These are our suggestions for the best equipment in Call of Duty but you are free to try out the other equipment and see what works best for you. Don’t be afraid to give suggestions in the comments below if you think some other piece of equipment might be better in the loadout.