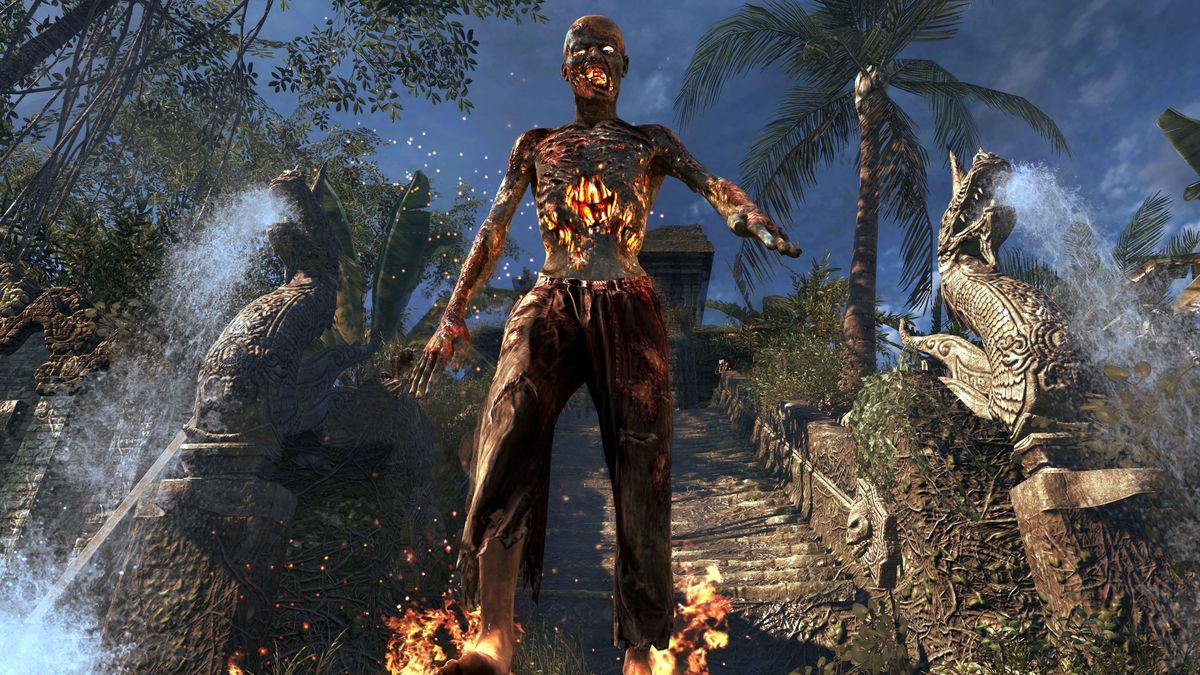 Kino Der Toten, Cinema of Dead in English is a Nazi Zombies map featured in Call of Duty: Black Ops. Kino Der Toten gets automatically unlocked for play at the start and you can start it right away even without completing the story. You can refer to the Strategy Guide below for tips, tricks and tactics to survive in Kino Der Toten.

First thing you need to do is turn on the power switch. Once you have restored the power, the teleporter, perk machine, Mystery Box, and traps will become available to you.

How to Turn On the Power

Take any, and make your way to the backstage. Switch on the power. Once the power is switched on, you have several survival options available to you, also the front door to the theater has now been opened providing more room for you to RUN!

Teleporter gets you to the projector room with a Pack a Punch machine. To activate the teleporter, you must first link it holding the interact button in the teleporter on the stage.

You will hear a click sound when the link has been established. Now, go to the lobby area where you started.

You will notice a pad, stand on it and press the interact button again. Teleporter is live! Make your way to the theater and stand on the pad to teleport to the projector room.

Round 1-9
During the first five rounds, the strategy should be to accumulate points, as much as you can. More points you accumulate, a greater chance of survival in the later stages of the game. You can buy weapons, try Mystery Box and open Barricades, etc.

Use the knife as much as you can. Always headshot, don’t waste ammo on legs of the zombie, aim for the head. Headshot and knife kill give you maximum points.

Leave one zombie at the end of the round to repair all the broken barricades and weapons you can have if you want. Only use the gun when you are overwhelmed. Don’t buy weapons off the wall yet, buy quick revive and move on.

Round 10-14
Accumulate enough points to buy MP40 + Juggernog/Speed Cola. Once you have accumulated enough points to open the staircase door, and the door next to it with all the portraits. Hit the power and buy Juggernog.

With MP40 and Juggernog/Speed Cola Perk, you can easily last till Round 15. You can buy ammo off the wall for $500. Safely avoid zombie and rack up points till you get a good weapon you are comfortable with from the Mystery Box.

Now here is when luck plays a major role, you won’t survive if you don’t get a good weapon at this stage of the game but keep trying.

Round 15 – 29
Run around the projection room clockwise, but this time evade every zombie that comes your way.

Keep your Zeus Cannon on in case you get trapped. Walk-in front of the zombie train, and keep close so they won’t take shortcuts and flank you, but keep enough distance away not to be hit.

When the maximum number of zombies have spawned (about 30 on solo), run to the turret pedestal, and face the zombies coming from the right (and a few from the middle).

At the last second, jump to the left. Walk a few steps and gather all the zombies into one place. Ready your Zeus Cannon. Aim. Fire.

If you did it right, you should have killed about 30 zombies in a single shot. Pretty impressive, huh? But it’s not over yet. Several other waves will still come.

But with your Zeus Cannon, you’re pretty much set for the rest of the game. Make sure to conserve your ammo, and only use extra shots when necessary. Otherwise, just repeat the same strategy.

Make sure to have 4 shots in the chamber when you get max ammo, especially from dogs. Take note that you do not get any bonuses when killing zombies with the Zeus Cannon, nor do you get many points at all; that’s where your LMG comes in.

In theory, you could use the Zeus Cannon strategy for 4 rounds without resupplying, but 3 rounds are a reality, as in the high rounds around the 30s, you will almost certainly need a few shots to get out of choke points.

This gives the player a predicament. To run out of ammo for the Zeus Cannon is a death sentence to an unskilled player at such a high round.

However, the large sum of points you should have acquired using your LMG/Upgraded M16 (Skullcrusher) will save you from a downfall.

Go back to the mystery box again and trade your Zeus Cannon for anything, doesn’t matter what it is. Keep trading, no matter how many points it takes to get the Thundergun back.

95% of the time you will get it back if you have a decent amount of points (about 20k). Also, if you don’t have Monkey Bombs yet, see if you can get some. Now upgrade the Thundergun.

Round 30-49
The tough time now, a lot of zombies and they are getting faster and deadlier but, now you are smarter than ever. Experience count for something isn’t it? you just have to be a bit cautious and it will be all right.

When you will teleport back from the projection room, the zombie will probably come your way faster from the theater. Therefore, run straight ahead with Zeus Cannon and hit trap immediately.

Some still will get through, so be careful, don’t fall asleep after hitting the trap.

Survive on the run, be careful entering unknown locations as their might end up in front of a zombie group. Most importantly, use traps to kill zombies and use Thunder Gun/Ray Gun as your Survival Ticket as a last resort.

Round 50+
Be extremely careful of conserving ammo, point maximization, and skill at evasion. Use traps frequently and make zombie trains so you don’t get flanked by spawns.

Group the zombies and jump in the teleporter at the last second to kill the stragglers.

Your mystery box is not going to give you the Thundergun each time so when you are out of Ammo for your Zeus gun, scrap the Ray Gun for an MP40-just for the points and continue with the same previous strategy.

After 35+ rounds, weapons become useless, so use trap mostly.

For the first few rounds make sure to let the zombies in and knife for the final kill. This will get you the most points. Start with 4 rounds to the chest for round 1 and go up by 4 shots each round.

Continue Unlocking as many doors as you can go around the right side of the map to the stage, hit the power. At this point, it depends on the points left for your team.

If you have enough unlocked the door across from where you came onto the stage and continue upstairs across the room and down into the alley.

Do not unlock the door at the end of the alley. If you don’t have enough points for all the doors then go another round on the stage until you do. Get either a gun off the wall or the box and do the weapon glitch if you know it and you have the points.

If you don’t know the glitch get perks. Otherwise, try to save your points for guns. Go back to the alley and go all the way to the end. Have one man cover the window there and the other three will stand facing towards the gate.

Some zombies will come off in the middle and the rest will come through the gate. Stand in the right spot and they all line up for you. If you are doing the weapon glitch keep the ballistic knives.

Try to make sure the guy at the window doesn’t have either thunder gun or the ballistic knives. The reason why is if someone goes down you must keep someone at the window still because if they break-in, it can be tough to recover.

In case someone goes down you have three options.

If you do this try to set up a running path and activate traps as you go. Then to start each round stand in the teleporter and activate the turret gun teleport when they feel to close for comfort or someone goes down.

While up in the Pack-A-Punch room feel free to throw a monkey, if you have enough to spare, and reign hell with either grenade launchers, rockets, or throw grenades and buy more.

Run up the staircase and through the door and wait for the zombies and activate the fence run to the stage and turn on the second fence in the dressing room if needed.

Try to push back through the middle to the lobby and start the loop again. Activate the teleport whenever it is off cooldown and use it when you can.

But try to not use it if close to the end of the round just in case you can’t get a crawler so you have it to start the next round.

Also, if you are doing the gun glitch and you really want a lot of guns to notice none of the weapons on the walls are in the box so trade crappy guns, python, snipers, rocket and grenade launchers for guns off the wall and you can buy back the guns you traded either to keep them or to get even more guns from the wall.