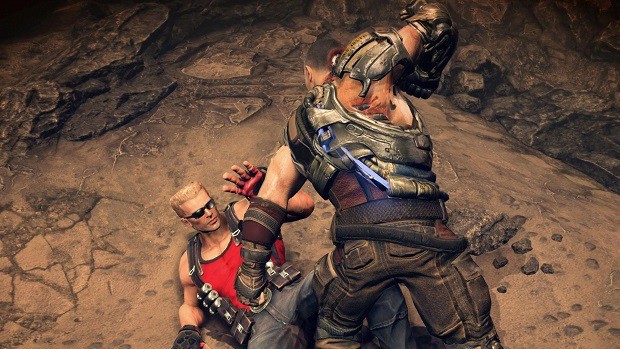 Bulletstorm is a game that doesn’t take itself seriously. This could’ve been a problem for me as I am perhaps known for taking myself and everything else far too seriously. Fortunately, this wasn’t a problem, the game got several laughs, more so than I expected, more so than many other games. There are ridiculous over the top statements and characterization intended to provoke laughter with low brow humor. It is a futuristic First Person Shooter set on a paradise planet gone wrong, with humans, aliens and mutants wreaking havoc fighting amongst each other.

You play as Grayson Hunt, leader of a small elite combat unit gone rogue. The game swiftly establishes why this happened and sets you to the task of hunting down a General who has been sending you on dirty missions for years. The culmination of which involved an assassination mission on a journalist that had pulled together information on your activities (The full nature of which has only been hinted at but almost certainly could be considered war crimes). Your General is revealed as a psychopath and you spend the game trying to hunt him down, having gotten half your squad killed in the process of an attack on his flagship. 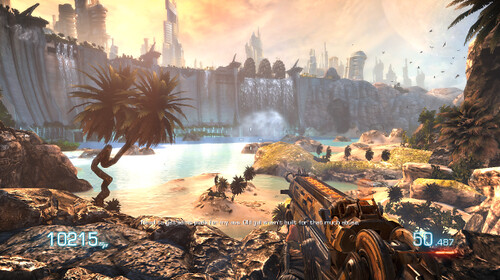 The game is a bit cutscene heavy. Occasionally control of movement and looking around you is taken away. If you’re the sort of gamer who likes to skip anything between you and the main action or hates losing camera control, this will be an irritation for you – particularly during the first two hours of the game.

There’s also that (unpopular for many) banes of several modern games – the quick time event – where you have to press a button at the right time. These have at least been evolved a little and tied directly into the skill-shots point system so that the better you perform in these events, the more points you get. In fact, you can’t really fail any of these quick time events, but you won’t get awarded as many points if your timing is off. This at least means you don’t get subjected to the tedium of redoing quick time events over and over again due to not pressing the buttons in time. 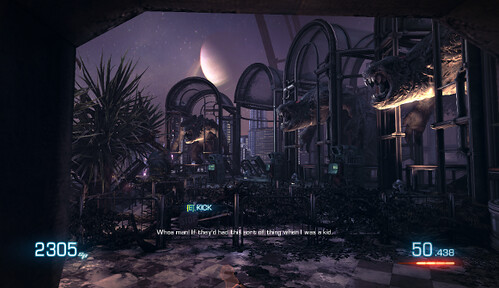 The game provides a system of skill shots which reward the player for pulling off spectacular kills, including using environmental damage such as exploding objects in the game world. The reward takes the form of points that you use to buy ammunition & special attack ‘charges’ or upgrade weapons with special attacks. The whole system is explained as a sort of ‘gamification’ gone wrong, where only the most skilled soldiers are presumed as capable of pulling off enough trick shots to get sufficient ammunition to survive in battle… Effectively it’s a form of enforced Darwinism where only the fittest/most skilled are allowed to thrive.

There is a wide variety of weapons available to the player including the Peacemaker Carbine (Assault rifle you always carry), Leash (Energy whip that can pull things), Screamer (A pistol), Flailgun (Launches two grenades linked by a chain), Boneduster (Four barrelled shotgun), Head Hunter (Sniper rifle), Bouncer (Bazooka with bouncing ammunition), Penetrator (Launches self motorized drill bits) and your boot (You can do plenty of literal ass kicking in the game if you so choose). 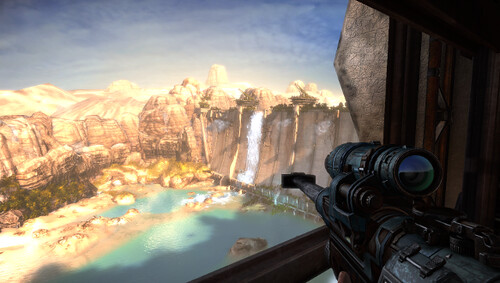 The skill shots system has different types of award for each weapon, which is a clever way of encouraging you to try each one in turn in an attempt to get all the awards for each weapon. During play, I found I preferred using the Screamer and Flailgun as my alternate weapons to the assault rifle. The Screamer is quite good for reliably getting headshots with a single shot and the Flailgun is good for picking off groups of attackers. I experimented with all the weapons, finding the Bouncer the most difficult to use well. The Leash also has a special attack that throws all enemies up into the air, leaving them hovering above, vulnerable, or dead if smashed against a ceiling – Particularly useful when the player is swarmed by enemies.

The Head Hunter is an interesting weapon, time slows down near the target so you can guide the bullet (Similar to the sniper rifle in Singularity, but the slowdown only kicks in near the enemy you’re aiming at). It has a skill shot for guiding the bullet into the testicles of your enemy but I found this impossible to do –when you fire at them, the enemies have this curious knack of dodging, in the same way, every time, where the closest leg is suddenly moving between your bullet and the target area. After a number of attempts, I lost all interest in using the sniper rifle further unless I had no choice in the matter for some reason. 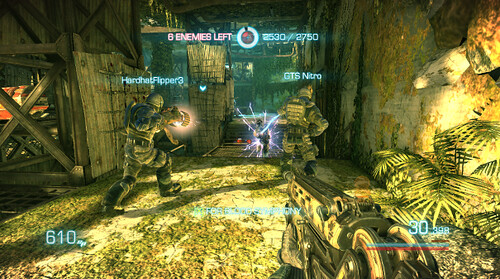 I also found that the kick attack would be particularly rewarding, I’d take particular joy kicking enemies onto spikes, off long drops or into lightning storms, jet engines and man-eating plants. At times, enemies are sent forward that only attack up close and this represented a perfect opportunity to stand next to some spikes and kick each one in turn as it got close. Actually, this was a little bit of a dominant strategy, you got 100 skill points as a ‘voodoo doll’ award each time that happened as opposed to up to 50 points with a headshot with the Screamer and could rack up a nice bank balance for upgrading and arming/charging your guns.

Bulletstorm has Games for Windows Live integration, I was concerned about this as I sometimes find that GFWL can be particularly intrusive to the game experience. Fortunately, this didn’t turn out to be the case, it only asked to be updated when I tried to access multiplayer (As someone who frequently sticks to single player gaming, this means my/your time isn’t wasted on an unnecessary update). The multiplayer swiftly brings together 4 players to co-operatively kill an assortment of baddies from the single-player game. It proved to be quite hard to get 3500 skill points from 35 enemies in the second round though and after a few attempts I gave up. 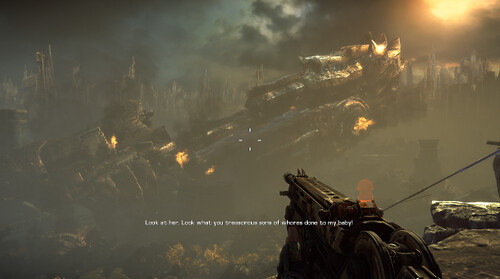 Overall, I found the game to be a ‘breath of fresh air’ from countless purely militaristic shooters that take themselves quite seriously. The skill shots system encourages you to be creative with how you kill your enemies and this is particularly noteworthy, I’m expecting other shooters to try and copy this system in some way in future. It’ll be interesting to see how Epic Games evolve the game should it do well enough to warrant a sequel. I regret to say I found the ending a little underwhelming, however, but to tell you why exactly would constitute a spoiler. The game does something that would be perfectly fine in a film or TV show, but which could be annoying in a game. The game is worth playing just for the large-scale set pieces and magnificent vistas that appear during the game.

Bulletstorm is a game involving plenty of ass-kicking - literally!