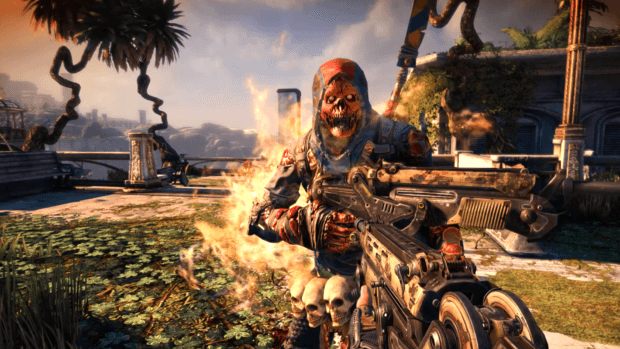 The original game failed to be a wide commercial success but it gained enough popularity for developers to consider a sequel. The sequel depends on the success of Full Clip and judging by what the developers have delivered here, it is safe to say we are on the road to Bulletstorm 2.

There is a lot of catching up to with modern day shooters since it is a six years old game, however, Full Clip Edition manages to holds its own, at least gameplay wide.

The main story is pretty typical for a shooter and there is nothing that exciting to be found there. But how to make a boring story hold its ground and keep the players engaged? Well, you will see plenty of blood, gore, loud guns, powerful explosives, and a cheesy lead character.

Aaaand it works! It still works for Bulletstorm.

Playing the game you will notice its age but developers have done an exceptional job hiding the fact with overhauled visuals. The highlight once again is its gameplay and it has aged better than anything. It is without a doubt deceptively complex and has the depth which newcomers won’t expect.

Players take on waves of enemies, increasingly powerful weapons, surrounded by a complete disregard for realism which makes it even more fun as it gives room for crazy mayhem.

Interestingly, there is a lot of creatively to the mayhem. Through the game’s crazy narrative we are told why it is better to find creative ways to kill enemies which somewhat rationalize creative kills.

Creative kills will land you more points and then redeem these points at various drop locations for minor upgrades to your weapons.

Controls for the game are relatively simple which is perfect for the game’s “Skillshot” feature. In-game currency is tied to the this “Skillshot” system and points are awarded based on a number of kills as well as a number of creative kills such as environmental kills and melee combo kills.

There are very specific types of kills such leashing two enemies together off the ground and killing the second one first before killing the first enemy before they hit the ground. 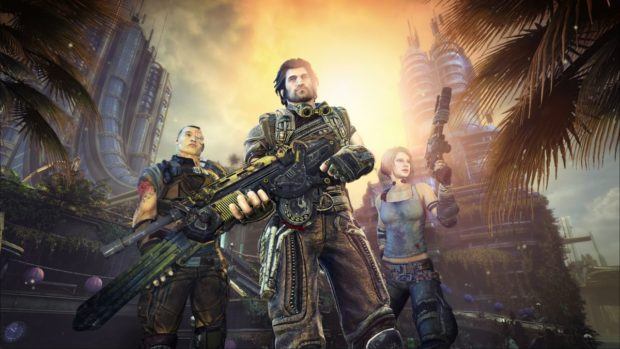 What’s impressive is that the game’s not confused and it exactly knows what it is. Bulletstorm is not trying be something it’s not and is very clear about its strong points. Gameplay is king here while the story fails at pretty much every step of the game.

Gameplay is the glue that holds everything together and gruff jokes and excessive violence is at the heart of Bulletstorm.

The online multiplayer co-op mode adds to the value of the game. It has a Doom feel to it and could play as the perfect training grounds for Doom multiplayer.

There are 30 multiplayer challenge maps with additional MP levels and developers have also added an exclusive Overkill Campaign mode to Full Clip. But the best part, you can play as Duke Nukem.

Developers have also upgraded the game’s audio to enhance your experience.  Surround Sound is excellently done which it easy to figure out where your enemy is hiding or coming from. 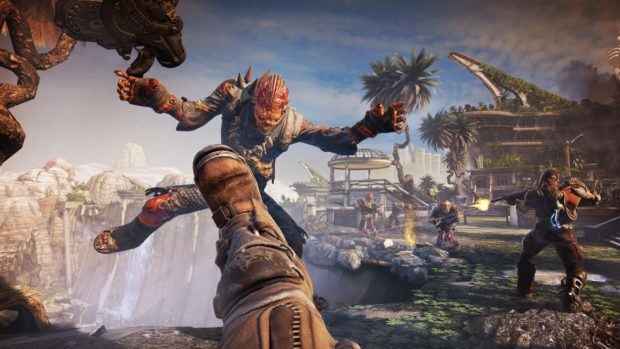 Bulletstorm has no shortage of action packed moments, over the top characters dialogue, and enemies who are just too fun to kill. By the end of it all, it will leave you salivating for a sequel. There should be no doubt that People Can Fly will work on another game, it is a matter of when not if.

However, a better story will be much appreciated.

To sum it up, Bulletstorm Full Clip Edition is home to excessive violence and successfully channels the soul of an old-school shooter experience.

Note: Bulletstorm Full Clip Review is based on the PlayStation 4 version of the game.

Still the mindless shooter it originally was... totally fun to play.