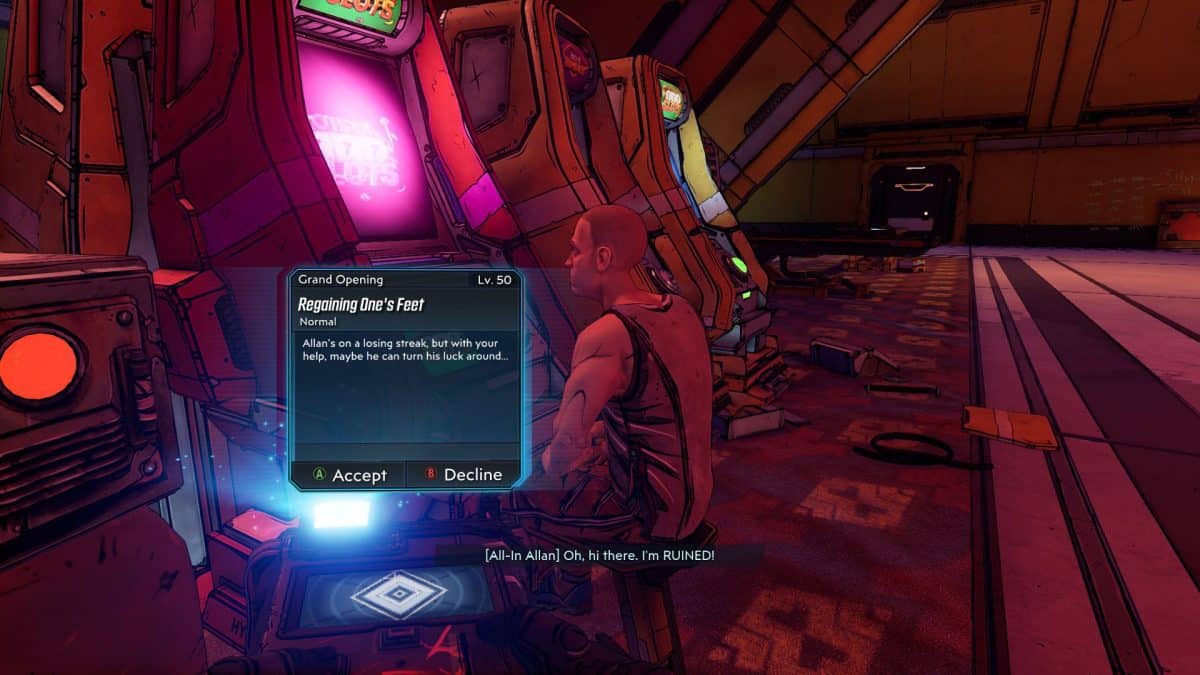 Speak to All in Allan
Inside the Handsome Jackpot casino, on the Westside you can find an NPC called the All in Allan. He will be in the are called The Chump Slots. Drop to the floor and go down the stairs to reach this NPC and talk to All in Allan to start the quest

Reaching Bruce the Duce
Allan will tell you the location of Bruce the Deuce who can be found on the floor below where Allan is playing slots, in the south east corner. Upon reaching the quest marker you will find Bruce, stuck between two slot machine and you have to pick his pick Lucky Horseshoe Trinket. You will get the next objective after this

The Good Luck Charms
Now you have to find the two Good Luck Charms which is pretty easy as they are on the map in the Chump Slots area. The Silver Skag Figurine can be found on the table next to a dead gambit which is one the lower floor, northwest corner of the room.

Lucky Hat can be found on the upper floor east side of the room. This can be found next to a dead bandit wearing a claptrap mask.

When you are looking out for the good luck charms, you will be chased by enemies. However, they will stop as soon as you get them both. So, you can just rush and get the charms and avoid the fight.

Meet Allan again
After collecting the Lucky charms, the objective to meet Allan again, triggers. Make your way back to Allan to return the charms to him.

Accept the money he offers and decorate him with the charms you picked. Stand back to watch the Luck and once that is done you will meet the Golden Bullion! This will trigger another objective.

Defeat Golden Bullion
Golden Bullion can be found in a aptly named Bullion’s cube which can be accessed by the door situated on the eastside of the Chump Slots! As you meet him it will trigger a conversation between Allan and him. Defeat The Golden Bullion and his gang and pick up the Lucky Foot he drops upon his defeat.

It will be easier to kill The Golden Bullion easily if you aim for his head, otherwise the fight will just get lengthy. Also, the bandits are not really that much of a concern if you bring corrosive or flame type weapons with you.

Rewards
Upon successfully completing the mission, Allan will give you 69360 cash and along with that you will be rewarded with All-In Epic Shield Mod, the experience points you get are 19554 XP