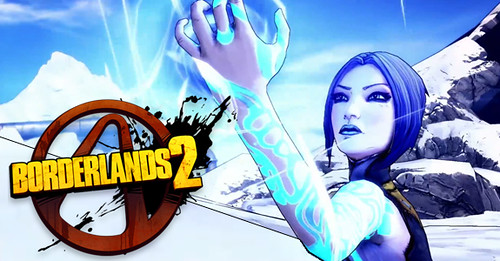 There is but one rule in the world of Borderlands, and that is to shoot until the surroundings are occupied by nothing but immobile corpses on the ground, alongside the wide variety of loot that they leave to be collected.

Borderlands 2 follows the same iconic trend, but develop Gearbox was intended to add more ways to leave cadavers and remains of your enemies wherever you go. While you still have the ample amount of ways and gadgets to carry out your shoot-and-loot hobbies, the major change comes from the overhauled class system that will be integrated into the game.

We’ve already covered the awesomely stylish Assassin class in another preview, and this time we’ll be looking at someone with a little legerdemain. The class I speak of is none other than the Siren – a returning class from Borderlands, but one that has been revamped to such a degree that it can be considered afresh.

The Siren Maya has a unique story of her own. Generally, in the Borderlands world the lore of the Sirens is that there are only a few certain number of Sirens around at a time in the universe. Maya, being one of them, is a rare one, as she knows a bit more than the rest about her race’s origin, and has been travelling across the universe finding out more.

When it comes to the features, the general concept of the game remains the same, irrespective of the class you choose. But the drive mechanic of every unique class (of which there are four) is their signature primary action skill. The Siren, whose specific appellation is Maya, has the unique primary skill called phaselocking.

Borderlands 1 veterans will recognize the term’s similarity with the older primary skill called phasewalking. Yes, it sounds similar, but it really isn’t. The phaselock ability is the first learned as Maya, and allows her to bind an enemy in a kind of stasis bubble, preventing them from taking any mobile action.

The mechanics of the ability are simple and actually very well thought out. Instead of sending out a projectile, the phaselock is actually a locking system; you highlight an enemy with a cursor and initiate the phaselock.

Regardless of how many other enemies may interfere in the path between you and the target, the phaselock will always have a perfect accuracy. Additionally, if you misclick and initiate the phaselock accidentally, your cooldown for the ability will be reset provided you have not locked on to a target.

At its most basic level, it serves as a very handy crowd control mechanism. This gives it multiple advantages; you could make otherwise fast moving enemies easy targets, or could immobilize an enemy that was causing a bit too much trouble for comfort.

But let me requote that this is only at its most basic level. The possibilities widen as your character progresses further. These possibilities fork into two types: support and sheer damage.

As her phaselocking grows stronger, Maya becomes the ultimate crowd controller and support character. Her phaselocking acquires healing traits. For example, in the later stages, killing a player that has been phaselocked will grant you and your team health. Similarly, Maya can use her ability to revive downed teammates. In other trees of hers, she can further enhance the skill to immobilize multiple enemies, making her a force to be reckoned with.

But crowd control and support are the limits to her abilities. Maya can deal out tons of damage if you progress her skill that way; she has a specific tree called Cataclysm, which does just that. You can also level the class to get increased effects against enemies that have been phaselocked. For example, through one skill called Wreck, Maya’s rate of fire and damage with all weapons is substantially increased against the phaselocked enemy.

What is more interesting to note is that the visual appearance of her phaselock will change according to the way you build it. So, you could imagine other players who play the class to have different looking phaselocks as compared to your own, if they chose to make a different kind of a build.

Foolproof as it may sound, phaselocking does have its limitations; it can’t be on bosses. Actually, it can, but it won’t immobilize them, as that would cause severe game balance issues. However, phaselocking a boss will deal out the damage it is meant to – it’s just the crowd control won’t be effective.

There’s still plenty of time till Borderlands 2 arrives, but it never hurts to know that you can possess magical abilities and petrify enemies.

See the game arrive on September 18 for North America and September 21 the rest of the world.