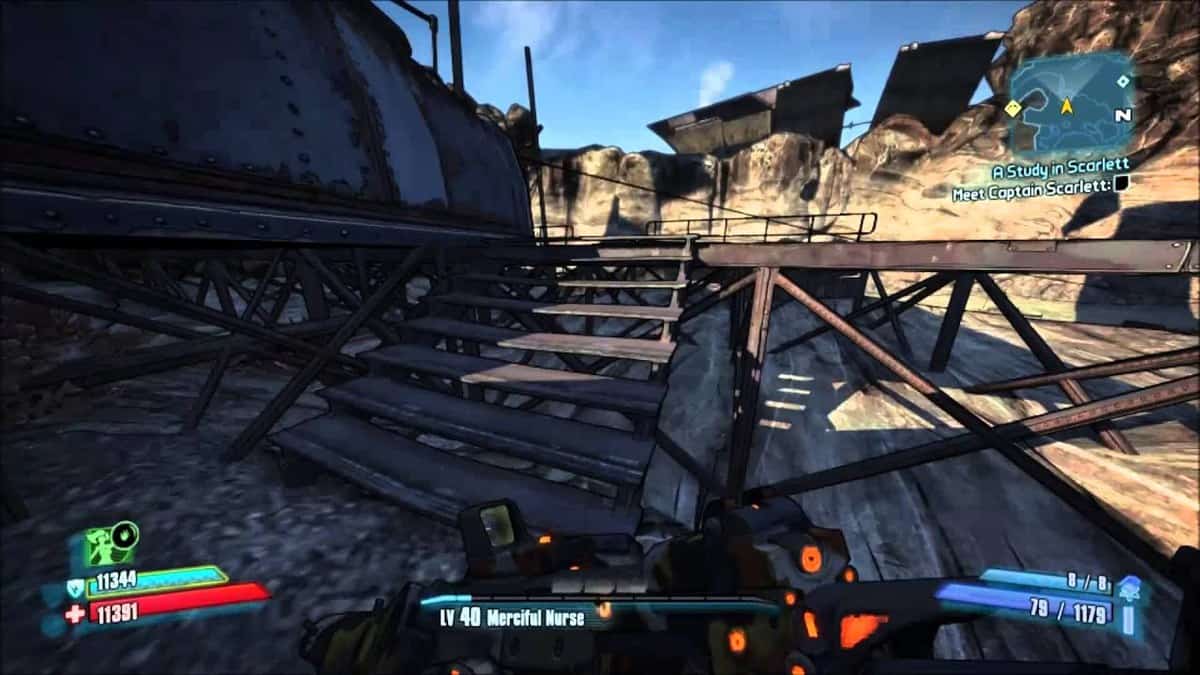 Borderlands 2 DLC pack includes 16 new vault symbols you can hunt down. As these symbols can be rather difficult to find at times, we’ve compiled a Borderlands 2 Captain Scarlett DLC Vault Symbols Locationsguide to make that a little easier for you. Keep in mind the guide is sorted by areas, and some symbols may not be accessible until you progress towards the story far enough.

Vault Symbol #1
Location. Explore the wooden docks overlooking the dried up sands below. On the dock, you can find a small shack for shade. Look at the back end of the metal to find a symbol.

Vault Symbol #2
Location. Go north of Oasis to the area only accessible once the main campaign of the DLC is complete. Run up the stairs into the second floor room to find the symbol on the wall.

Vault Symbol #3
Location. Search the wreckage of a ship to the east of Oasis. Look inward toward the wreck to find this one.

Vault Symbol #4
Location. Go to the camp in the center of the Oasis and move across the bridge to find Coral Island Camp. Search around to the right wall to find the last symbol.

Vault Symbol #5
Location. Get to Captain Scarlett’s Barge. Use to elevator to climb to the top deck and jump past the railings on the left side to look on the ship’s wall above the initial access ladder. You will find the symbol there.

Vault Symbol #6
Location. Next we must find a camp on the eastern side of Wurmwater. Search for the bones of a ship’s hull on the cliff-face and look for a door and wreckage embedded in the rock wall. The symbol is on the wall next to the door.

Vault Symbol #7
Location. Below the massive derelict oil platform, run west down the canyon path full of sandworms toward the shacks over the sands connected by bridges. Climb up a ladder to reach the shacks, cross the rickety bridge and continue east down the path.

You’ll pass by the massive satellite dish, following the cliff-side rickety platform until you reach a dead end with two shacks and a chest. It’s a long path, but the symbol is on the wall behind the chest.

Vault Symbol #8
Location. Take the west path from the center of Hayter’s Folly to find a door. You’ll need to take the “Grendel” side-quest to get through. Once you’re inside Grendel’s Den, defeat the enemies until a rock wall drops to reveal a new passage. Search the ceiling of this passage to find this symbol.

Vault Symbol #9
Location. In the the large westernmost chamber look near the steps to see some sets of shipping containers. Near one staircase, there is a container with the symbol printed on the back, near the northern path out of the chamber.

Vault Symbol #11
Location. Move up to the northern section of the Rustyards. Climb the ladders up into the right side of the hanging settlement area. Proceed down the catwalks, and look right early on, between two buildings and above a sloped metal surface.

To reach it, you’ll need to continue forward, climb a ladder, and use the awnings to get on top of some roofs before back tracking to the symbol.

Vault Symbol #12
Location. Jump off the railings in the chamber in the northwestern corner of the refinery to search below the walkway. Hidden against one of the lower walls topped by a slope you’ll find this symbol.

Vault Symbol #13
Location. In the center passage of the refinery, push toward the massive circular chamber but don’t go inside. While still in the long hallway, go down the steps to a trashy area below. The symbol is right on the wall.

Vault Symbol #15
Location. Climbing up toward the Lighthouse itself, you’ll enter a small town square after passing some rail lines with a cart on it up a hill. In the center, turn left and look for a larger building with a propeller attached. Circle around to the back wall to find a symbol.

Vault Symbol #16
Location. Once the creature has been defeated, you’ll see a door directly behind you leading into its chamber. Circle around to the exterior and you’ll find the last symbol just away from the door, slightly above. You’ll need to jump to reach it.