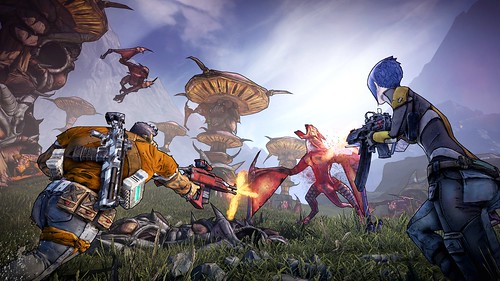 The Borderlands series’ unique mix of intense first-person action and the ever-addictive art of looting makes it one of the most loved FPS games of the current era.

With Borderlands 2 released today in the US, fans will have their thirst of looting and shooting fulfilled once again.

Old veterans will enjoy the retrospective iconic aspects of the game, and the familiar yet renewed classes that it features. Newcomers will also have a lot to look forward to, as they are introduced to four exciting classes and characters, each with unique abilities, play-style, and essential role in combat.

While a lot of us enjoy the experience of Borderlands solo, the thrill of the game is multiplied as you group up with others to take on the Space Western world that is filled with unimaginable foes.

For a refined experience, it’s extremely essential to have your character refined and well-developed. Borderlands 2 uses a character-development system that is mostly seen in RPG games, utilizing the concept of progressive skill trees.

However, in this game, these trees are simplified, so to make them easily understandable, shareable, and malleable to a large degree.

Each class in Borderlands 2 comes with a Signature Skill (also known as Action Skill), which is the core skill of the class. This skill is unlocked at Level 5 permanently.

Furthermore, the character development system, which is branched into three independent categories or trees, has a large set of abilities that revolve around the amplification or modification of this signature skill.

The signature skills of each class along with their description are given below:

Axton (Commando)
Sabre Turret – Deploy a Sabre Turret that fires at enemies. When you are near the turret reclaim it and refund some of your cooldown.

Maya (Siren)
Phaselock – Lock an enemy in another dimension, preventing him/her from fighting back for a short while. Some enemies cannot be Phaselocked and instead instantly take damage.

Salvador (Gunzerker)
Gunzerking – Draw a second gun and go nuts! While Gunzerking you instantly regain 50% of your total health, gain damage reduction against enemy attacks, and constantly regenerate health and ammo. Does not regenerate rockets.

Zer0 (Assassin)
Decepti0n – Create a holographic decoy and vanish for a few seconds. The longer you are invisible the more damage your next attack deals, but ending your invisibility sooner causes your next Decepti0n cooldown to refresh faster.

Each class can have a maximum level of 50, with 46 points to invest in three independent trees. In order to unlock the trees, the first point must be invested into the signature Action Skill at level 5, after which a total of 45 points are available to the player to divide in the trees according to his/her choice.

The trees for each class are given below:

Each tree has six rows of skills in them. Some rows have only 1 skill, others 2, and some even have 3.

Because of the freely available total 45 points in the game, and the huge set of skills to choose from three different trees, there are plenty of possible variations that can be made with one specific character. It is essential to understand the role of each class/character, and make the builds accordingly.

Each Class Build guide contains 4 different builds for 4 different play-styles. We have used Borderland 2’s official Skill Tree Builder for making these builds. Do note that these are subject to change, and can vary according to player play-style.

You can read our detailed take on recommended builds of each class in Borderlands 2 by browsing through following builds guide: