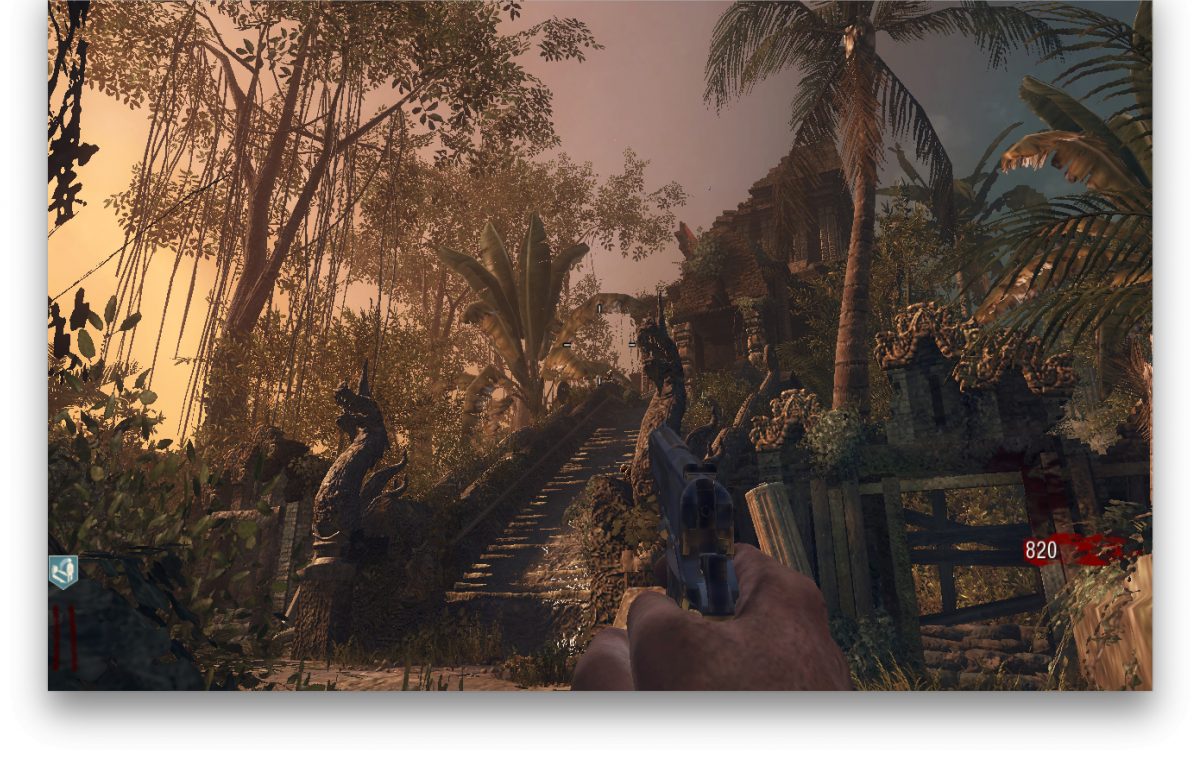 Shangri-La is the Zombie map included in Annihilation map pack of Call of Duty Black Ops. Zombies return with vengeance in the mysterious land of Shangri-La, a legendary shrine lost in an exotic jungle. This Black Ops Zombies Shangri La Strategy guide will help you figure your way through this map.

For the first time in the game, you will be up against female zombies, blazing Napalm zombies, and Shriekers who can blind the player.

Monkey bomb and Bowie Knife return in Shangri-La plus a new variant of Wonder Weapon. Don’t want to scare you but they are bigger, badder, and ugly… still you have to unravel the mysteries that this land holds and solve them to extract the information you seek.

First let’s talk about the arsenal of weapons you have at your disposal in this fight against zombies.

I won’t go in detail how you should use each of these weapons, because we already have it covered in great depth in Black Ops Zombies Weapons guide.

Perk Machines in Shangri-La are similar to Shi No Numa, that is they spawn at random locations, so you have to guess their location when the need be. Quick Revive always spawn in the first room while the rest of the perks can be separated into two groups.

Stamina-Up, PhD Flopper, Deadshot, Daiquiri, and Double Tap randomly spawn underground while you will find Juggernog and Speed Cola above the ground.

Shangri-La is a zombie map, so all the basics of survival and strategies we have been using against zombies apply. If it’s your first zombie map, read Black Ops Zombies Survival Guide.

After you have read the basics of survival, following are the tutorials, that will get you started with Shangri-La zombie map.

Shangri-La Zombies How To Turn The Power On

There are two power switches located in a hidden room past the river. Both you and another teammate will have to pull the levers together. Once you’ve activated the power, you can purchase the perks

Shanri-La Easter Egg involves helping Brock and Gary escape Shangri-La, while Richtofen tries to harness the power of the Focusing Stone using the Focusing Crystals. When you successfully complete this Easter Egg, you will unlock Time Travel Will Tell achievement.

It’s a long Easter Egg and requires certain tasks done in order and probably is the hardest Easter Egg yet in any zombie map. You requires players to do that. If you are successful, you will trigger the Eclipse and travel to the past.

Though, all six radios can be only retrieved in the present.

Step 1
Turn on the power. You will find four dials in the starting room each on their own wall by Quick Revive. When pressed at the same time, they will distort time, causing players to be sent into the past, the moon to eclipse the sun, and a giant 115 meteor to rest above the temple in the starting area.

Step 2
There are two characters locked behind the MPL. You need to press the button in order to get them talking. They will obviously ask you to set them free. After they finish their dialogue, you will find the magical plates outside the spawn, 12 on each side. Activate the Eclipse.

Step 3
When you activate the switch, several panels will appear along the area on the bridge, near the rotating statue.You need to make them disappear to complete this step of the Easter Egg. How to do that ? One player stands on a plate and tells the other player what the symbol is.

If the player stands on a plate while the other searches for a match, all symbols will change to a different plate. You need to complete this step within 5 minutes or you will be sent back to present and will have to start over again.

If you are successful, you will hear a sound and a Focusing Crystal will appear on top of the MPL.

Step 4
Take the Water Slide down, but do not move from the bottom. Get three players stand on the pressure plates, have the fourth take the slide. You don’t need to press the X button or Square, you will crash into the switch and activate the switch, sending players back to the present, when done correctly.

Step 5
Go to the waterfall, look for a diamond at the top. You can knock it down with a Ray Gun or explosive. Shoot it with 31-79 JGB215 when it is on the ground, it would shrink. Knife it and it will go into slide to the water sprout. Launch it with the water Sprout and it would land on top of the tower. It would spawn another one of these, when done correctly.

Step 6
Take the tunnel that has a pressure plate in a crevice. There is a gas pipe next to the pressure plate needed to access Pack-a-Punch. You need to turn the wheel four times, until the characters can be heard talking about the spikes. When done correctly, it will result in several gas leaks across the walls and ceilings.

Step 7
This is probably the most annoying step. You need a Napalm Zombie and lure the undead to walk through the gas leaks from the previous step. You need to walk him through the entrance to the cave, near the spout launcher, or just before the power room.

When done correctly, it will raise the level next to the tube and the crevice. Press action button to lower it. You need to complete this step in the same eclipse as the previous step. When you hear characters talking about the floor being covered in lava, it’s an indication that you have successfully completed this step.

Step 8
Travel back to the past and you will find 4 holes on the side of the tunnel with MP5k on board. You need to plug these into Spikemores. The best strategy to do that is by luring the Napalm Zombie towards the tunnels and place the Spikemore facing the holes, so that the Punji Spikes get plugged into the holes.

When done, go down the waterfall and you will notice a brick wall on the side of the center boulder at the bottom. It says “Do not hold X”. Hold “X” and the players will return to the present, indicating the step was completed successfully. New diamond/globe will appear above the mud pit temple after you have completed this step.

Step 9
Go to the Past. There are 12 panels spread around the starting area, the mudpit temple, and the mine cart area. Instead of stepping on the panels in Step 3, knife these. When all Panels have been lit up, you will see a snare trap near the mine cart gate.

You need to destroy with an explosive. When done correctly, the characters will say, it worked, and the players will return to present. This step is the most difficult so I am adding the video below courtesy of NGTZombies that walks you through each panel.

Step 10
After step 9, you will find a radio on a barrel by the Minecraft gate. You need to go to the past for it to work. Go to the past, into the mudpit temple, and set the dial to its corresponding numbers (16, 1, 3, 4).

When done correctly, the characters will say that the code worked. Another diamond/globe will appear above the mudpit temple, indicating that the step was successful.

Step 11
In the present after Step 10, you will find a radio by the right side of the stairs leading to the pack-a-punch machine on the floor by the statue. The radio will indicate Brock lost his bag of Dynamite somewhere while running away from zombies. You need to find that bag of Dynamite.

Step 12
Again, you have to travel into the past. Once you have the Dynamite, shoot the Focusing Crystal above the mudpit temple. Charge the Crystal again, and upgrade your 31-79 JGB215. You need to upgrade the weapon or it won’t work and character will indicate that by saying not enough power.

After you have upgraded it, shoot the Focusing Crystal above the mudpit temple, the beam traveling between the Focusing Crystals will become more powerful. When it hits the last crystal, 3 beams of orange light will hit the giant 115 meteorite, shrinking it to fall into the temple.

Enter the temple again, and you will find the wall gone, and on an altar, the Focusing Crystal will be floating in the center. Hold the action button to obtain the stone. Once you have stone, you will instantly get all the 7 perks permanently for the rest of the game even through death.

Once you have done that, Pack-a-Punch Machine will re-appear to its regular location and you can repeat this Easter Egg. You can watch the Eclipse Easter Egg walkthrough video below if the text isn’t clear to you or you are finding it difficult to do certain step.

You will find these radios while completing the Eclipse Easter Egg and you may not find some of these unless you complete certain Easter Egg step.

Radio 2
This radio will appear when you have completed step 5 of the Easter egg and is hidden by the waterfall on the cliffside trail. Radio 3
After completing Step 7 of the Easter Egg look for it under the waterfall in the water filled area. Radio 4
You will find this radio on the crate next to the Mine Cart after you complete Step 8 of the Easter Egg. Radio 5
After you have completed Step 9, you will find on the crate next to the Mine Cart. Radio 6
After completing the Step 10, you will find it at the base of the pyramid. Don’t forget to tell us your strategy and the highest level you have reached so far. I hear someone already reaching 99th level* on Xbox 360 already.