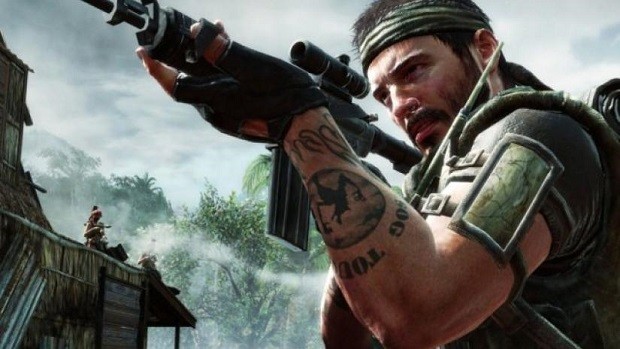 We got a new Call of Duty: Black Ops 4 beta trailer and surprise surprise, we caught a glimpse at the much talked about Blackout. The trailer outlines plenty of new details and gives us the first-look at some of the weapons, the return of verticality, scorestreaks, multiplayer maps/modes, and the much-awaited Blackout.

We open up on the trailer, we see a guy using a powerful weapon, possibly an upgraded AK47, up close to get rid of his enemy before getting a shot of a dog running around while money is flying around it. Next, we can see verticality return to Call of Duty with the leap from a balcony and a kill confirm right after.

Soon after, we see a cool gadget, a Mantis, with some powerful capabilities. Not long after, we look at another cool piece of equipment, an RC car which electrocutes the enemy in front. Wicked fun! Do note that this would be the talked about ability for the Prophet Specialist class of the game.

Next, we look at the six multiplayer maps that will be making their way to the beta. First up is a Japanese setting with castles and beautiful gardens. Secondly, we have a posh area with mansions and exotic cars. Next, a sci-fi setting which seems to be in a laboratory surrounded by cliffs.

Then, we get a look at map taking place in the Caribbean reminding us of Far Cry 3 with the sea and the lush greenery. Next, a snowy region and finally what seems to be in some part of Italy with colorful Roman infrastructures.

It will be also promising to check out six different multiplayer modes in the beta. Free-for-All being the most popular will surely be one of the modes. We will have to see for the rest.

We then get a short montage of new weapons making their way into the beta. These include an LMG, an Assault Rifle with mounted Grenade Launcher, an SMG, and a cool looking sniper.

Some equipment which seem to be available as special abilities of each class can be seen in the trailer. These include a radioactive device that burns the foes to ashes, a tactical shield capable of sheltering up to 3 members or more from taking bullets, and a trip-wire explosive.

Next up, we take a meaty look at some of the scorestreaks rewards including a Warthog, a Strike Team, Laser Sentry Turret, the Mini Explosive RC, and the AC-130. With that, we receive a date for the beta that is to be released on Aug. 03. That is not all, since right at the end; we get a short sneak peek at the new battle royale mode titled Blackout in the game.

In the snippet, we do not get actual gameplay but some footage regarding the Black Ops 4 Blackout. We already know maps, weapons, characters, and vehicles from previous Call of Duty games will be returning. Now we get to see some of them in action.

The sneak peak opens up on the map Turbine showing a couple of soldiers one of whom resembles Frank Woods from the Black Ops series. We then see four parked ATVs and then soon a cut into the perspective of a person aiming through the sniper’s scope.

He takes out another soldier who is riding the chopper. At the same time, LMGs are being fired from the chopper at the soldiers riding these ground-based vehicles. Things like these were not possible before in Call of Duty when gameplay is concerned.

Some blink-and-you miss images that flash in the short segment include a picture of the map Verruckt, the popular Nuketown map with a few changes, a building resembling that of the High Rise map in MW2, and of the Raid map. We also get a glimpse of drive-able boats and gliders. Therefore, players would be able to move and battle it out on land, sea and air. Cool indeed!

That is our careful look at the trailer for the Call of Duty: Black Ops 4 beta. Did we miss anything? If so, let us know below in the comments!