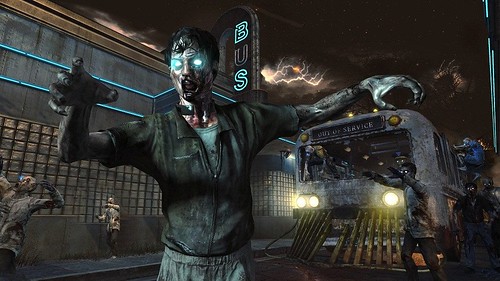 The Tranzit game mode is probably the highlight feature of Black Ops 2. Whereas previously firms went along with the Zombie multiplayer mode as a sideline project, Treyarch took it head on and made it a big part of their game.

The mode includes four new playable characters: Stewey, Marlton, Misty and Russman. Samuel is the funny guy of the group that laughs even while being pursued by a dead mob.

Marlton is the brains of the group; he has the nerdy look which comes complete with geeky glasses and a white button-down. Misty is a southern bad-ass girl of the group who excels at butt-kicking. Russman is an outback African-American who seems to be a little laid-back in the zombie onslaught.

Tranzit has its own storyline and uses a single map called Green Run, which is divided into five different areas: Bus Station, Diner, Power Plant, Farm and Town.

Most of the above-mentioned maps can be played separately in the survival mode, where the only major difference is in the availability of perks.

Below is a compilation of our Survival Strategy guides of the maps. The guides give you an overview and highlight the key locations of each map, giving you an increased chance of surviving the undead horde.

For a better understanding of the Tranzit mode you can go through our Green Run Tranzit Strategy Guide which reveals secret locations, how to travel to them, the upgrades to your Tranzit bus and more.

The Work Bench
The Tranzit mode also features the ability to create your own weapons to use against the undead. The work bench, much like in Dead Space 2, enables crafting through which you can create unique items like a Zombie shield or Turret. To do so you will need different parts that are found all over the maps.

Our Item Building Guide tells you the location of each part and the recipe of every weapon.

Weapons, Upgrades, Perks and Power Ups
The right amount of fire power is crucial for survival against the raging zombies. Our comprehensive Equipment Guide helps you know better of what weapon to carry, what upgrade and perks to take and which power ups to go for.

Secrets and Easter Eggs
You will come across streetlights all over the map that emit a green glow. A Denizen zombie that is led to one of these streetlights will escape by digging underground, right below the post. The zombie will leave behind a portal that leads to other green streetlights in the map.

In Town, there is a safe door that can be blown open with the help of an explosive. Inside there is a special vault which stores your points. In Farm, there is a fridge where you can store your weapon and pick it up later.