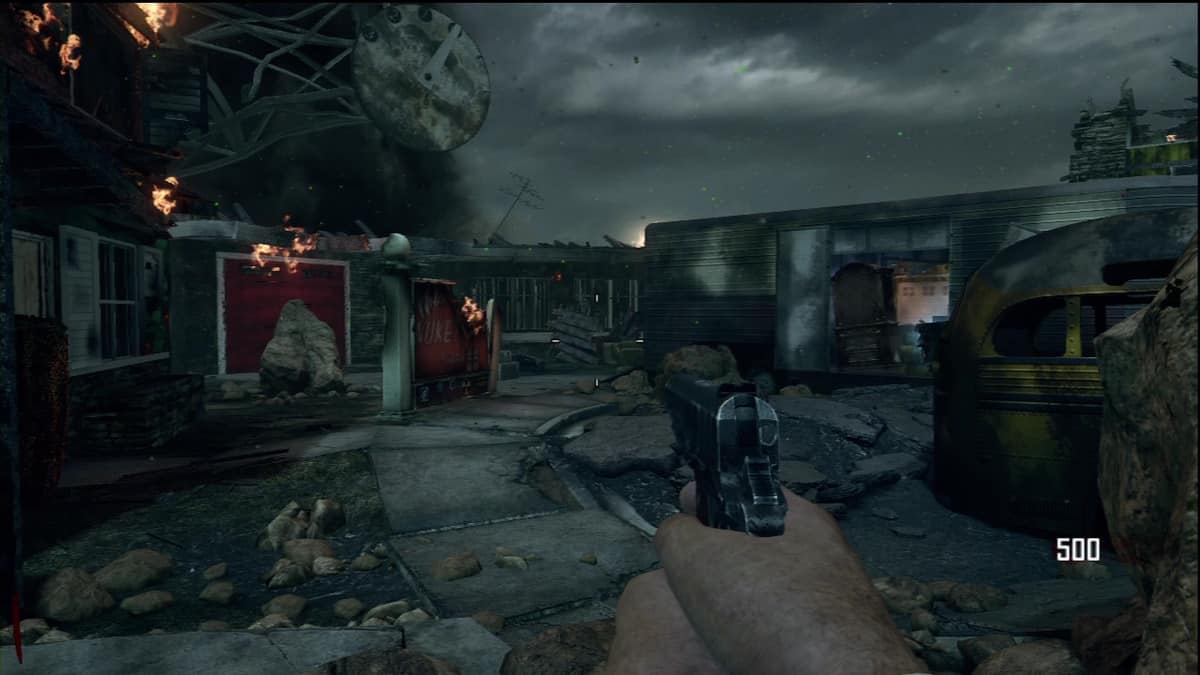 If you purchased the Hardened Edition or the Care Package Edition of Black Ops 2, you’re in for an additional bit of zombie infestation in the Nuketown map, a recreation of the map with the same name from Black Ops multiplayer. In this guide, we will focus on giving you Black Ops 2 Zombies Nuketown Survival tips.

What makes Nuketown different from the other zombie Survival Maps (Green Run maps) is that the bonuses (Perk machines and Pack-a-Punch) have a slightly different mechanism of existence – they don’t occupy specific regions of the map. Instead, they ‘spawn’ in the map at certain rounds.

After every 100 or so kills, a Perk machine will come crashing down at one of the zombie spawn areas. Occasionally, a Pack-a-Punch machine will also randomly come crash down in one of the spawn regions, of which there are 10 in total.

Black Ops multiplayer veterans will instantly recognize the general structure of the map. A few regions are blocked off by rubble, which can be cleared away at the cost of points (analogous to doors in the other maps).

There is a door located in the backyard of one of the houses. You can unlock the door for 3000 points to collect a random Power-Up. This can only be done once, so I highly suggest that you leave it for later rounds (typically the tougher rounds between 14-25).

There is a central Truck as well with a container that is blocked off by clearable rubble. Inside the truck are a variety of different wall-mount gun purchases. This is the most essential part of the entire map, and should be your datum point.

If you are playing solo, you’ll notice a Quick Revive Perk machine instantly drop at the start of the first round.

In addition to the wall-mount weapons on the bus and inside the truck, there is also the Mystery Box.

Next to the truck and bus are a set of houses that can you can gain access to. Make sure to open them up within the first 10 rounds to give yourself some space, as this map is otherwise too small for your long-term zombie-slaying fest.

Nuketown has some pretty good wall-mount weapons, and unlike the other maps, wall-mounts can be more useful than the Mystery Box.

At the start, you would want to get as many points as possible. You should start off by knifing only in the first couple of rounds, and then move to a couple of shots and knife to finish of.

Remember: you get 10 points for every hit, so maximize your points with some shots and then a knife (a great way to do that is to shoot the legs 3-4 times and then knife them).

When you have collected a decent amount of points, it’s time to unlock the truck. The truck contains some pretty awesome wall mounts, of which the best is the Bowie Knife. This badass melee weapon will replace your standard knife, and can insta-kill zombies up to a certain number of rounds. This weapon will be your salvation for any troubling situation you find yourself in during the first 10 or so rounds.

Once you have acquired the knife, it’s time to invest in opening up the space a bit. Collect some points in standard fashion, shooting a few times and then finishing off with the knife. Once you’ve acquired some space, it’s time to start working.

If you’re playing solo, I highly recommend that you drink your Quick Revive perk after round 5. You would want to then use the upper-stories of houses along with the truck parameter to maneuver zombies to your likings.

Sadly, for the campers, there are very few places a player can successfully camp in Nuketown; the map requires constant movement, and thus it can get a little troubling. Because of that, you should identify the spawn points of the zombie (typically they climb up from the ledges of the northern part of the map).

Once you do, try making a route for yourself that allows you to travel to the mentioned key locations of the map in a cycle.

You would then want to start looping zombies. Looping is a highly effective method of clustering zombies into a large crowd, after which you can annihilate them by spraying bullets of an automatic rifle or chipping a grenade.

This method gets you a large amount of kills in very little time, and will also ensure that you get some Power-ups. At later stages, points become second priority, and survival becomes the first, so this method becomes particularly essential at those stages. Consider implementing it from around eight onwards.

Since the zombies are slow, and they tend to chase after you, you can trick them into going in a loop and jumbling up together. This looping mechanism requires a defined route that you would take to do so.

Looping in Nuketown is easier than that in Town and Farm because there isn’t too much of that lava/fire stuff going on in the map. A great place to start looping zombies is the truck parameter.

At later stages, when the zombie population per round starts to get dense, you should start going through the houses. Of course, you should expect a few to spawn inside something of the houses (or at least near the windows).

The upper-stories are particularly useful in getting them to cramp into a stairway, after which you can throw a grenade or so (or simply shoot) to get an insane amount of kills and possibly power-ups.

As far as Pack-a-Punch and Perks are concerned, recall that they will spawn after every 100 or so zombie kills. Basically, this means you have to earn the perks.

I highly suggest that you take the Jugger-Nog perk the instant it crashes down. The cramped map won’t be kind to you at levels beyond 15, and thus it’s important that you’re capable of surviving more than just two hits from an undead.

If you have trouble moving about freely at later stages, a great way to turn the tides is to create crawlers. Crawlers are zombies that, well, crawl, because their legs have been mutilated.

It might seem tedious to shoot every zombie on the leg to make it a crawler, and because of that very reason a lot of people tend to follow the strategy of clustering (looping) zombies together and throwing a grenade at their feet.

Zombies at higher rounds don’t die easily from grenades, but their legs do get mutilated. Use this to your advantage so that you have some time and space to move about freely and collect some weapons from the mounts or the mystery box.

If you’re playing with friends, it’s important that a couple of them stay out in the open while the other two (assuming four friends are playing) stay in the houses.

Initially, you would want to get the Quick-Revive perk to come crashing down as quickly as possible, after which your objective should be opening up the map.

Once that is done, try to get one of the players to for a small loop in an isolated region, while the rest try to fend off the zombie threat everywhere else. However, make sure everyone is close-by, as in higher rounds, you’ll surely be seeing your friends drop in the last-stand position occasionally.

Don’t forget to share your tips and strategies with us by commenting below!