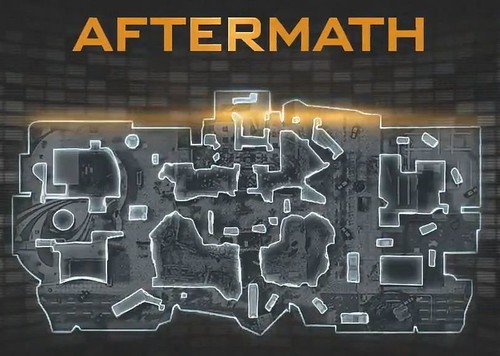 The remnants of downtown L.A. after a Drone attack make up the map “Aftermath” in Black Ops 2. You’ll find dilapidated buildings, piles of destroyed vehicles at every turn, and craters that fill the streets. Interested in mastering the map? This Black Ops 2 Aftermath Map Strategy guide should be useful.

In the center of the map is a toppled skyscraper that creates a mix of terrains in one of the map’s hotspots, making for a very challenging array of battle strategies. On the east and west ends of the map respectively, are a parking garage and a shopping center, both act as bases with upper levels providing limited lines of sight.

Weapon Suggestions
Aftermath is more prone to a lot of close-range encounters, which makes the SMG an ideal primary weapon. The MSMC works well for this purpose, but what weapon you rely on depends on where you are in the map and how you play.

The SMR is a great candidate for Free-For-All deathmatch, as it has the best kill range with limited amount of bullets needed, but it sacrifices reload time for this. It has a recoil plot that goes straight up with minimal scatter to the right, so it’s excellent for lining up shots on the fly. Because of it’s lack of reload time, use the fast mag perk to compensate.

Hotspots
The southern-most hotspot in Aftermath is located at the very bottom of the map, just past the ambulance if coming in from the east side, and just past the wrecked semi and under the Los Angeles Evac Route sign from the west.

This hotspot is suited perfectly for CQC, so be on your toes for knives. The central hotspot is the map’s most dangerous, which mean rerouting your movements to the north or south.

Furthermore, keep an eye out for snipers hiding in the east and west bases when around the outer wreckage areas of the center. The northern hotspot is another CQC area with plenty of hidden areas in the Los Angeles Business Center.

Map Vantage Points
There are two specific vantage points located at the western most base of the map in the Agora Shopping Center. The broken window of the shopping center gives you a clear line of sight into to the wreckage leading from the southern-most hotspot, while the vantage point next to the it gives your clear views of the stairs, a medium range bead on the path out of the center hotspot, and long-range sights on the path from the northern-most hotspot.

The southern hotspot is also a keen area for getting picked off from the west or east by campers tucked away in the vantage point leading from the center hotspot. Two more vantage points are located in the eastern base.

West Base
The Agora Canteen offers some nice behind-the-bar coverage, making it hard for enemies to know exactly where you are. You can easily get the jump on players running in through the door directly in front of the bar or from outside lobby behind the bar. You can also make quick getaways because of the two exits. The magazine shop is where you’ll find one of the vantage points overlooking the path from the southern hotspot.

The third route goes south through the shopping center, leading behind the wrecked semi through the southern hotspot and into the street next to the east base. There are, of course, several variations of each route, so get creative with it if the game calls for it.

Los Angeles Business Center
The cramped wreckage that was the Los Angeles Business Center is an excellent place to farm for kills. It is dark and there are so many places to hide, and people use it as a throughway to the east and west bases. You can also pick off people hanging around the shopping center from the ladder leading upstairs. Plant some C4 or claymore, and don’t forget to watch your back.

East Base
The crater outside the parking garage is a great place to pick off unsuspecting travelers into the east base. Because of its depth, it’s easy to fire a few pot shots and duck back into the crater for cover. The security room is a cramped space where you can easily get one-shotted with a person toting a shotgun, or even just stabbed.

Just above the security room you’ll find one of the east base’s vantage points overlooking the ambulance and path into the southern hotspot. The upper P2 Green level of the parking garage offers some nice coverage of the Business Center as well as the path from the central hotspot. It’s also a nice little spot for camping because of the coverage you get from hiding behind the parked SUV.

Just remember, a well-placed grenade or a few shots and that vehicle will go up in flames! From the east base there are four main routes to get to the west base. The first route leads from the path between the main parking garage and the security room directly into the center hotspot and up the stairs into the Agora outside lobby. The second route begins the same way, but deviates into the northern hotspot and into the alley next to the Agora Canteen.

When planting the bomb, use a loadout for close encounters, such as an SMG. Loadout with perks such as ghost and flak jacket to remain undetected and tough, and use smoke grenades to protect you while planting the bomb. If you’re defending, hold your ground with explosives, as well as Tactical Mask or Engineer.

If you’re assaulting the flag, choose Lightweight and Extreme Conditioning as well as an SMG or assault rifle to maneuver quickly and silently. When defending, use an SMG with Target Finder or Dual Band,

Offensive players should Loadout with an SMG or assault rifle, and either Dead Silence or Extreme Conditioning for Perk 3. On defense, use Lightweight and Extreme Condition to cover your flank quickly.