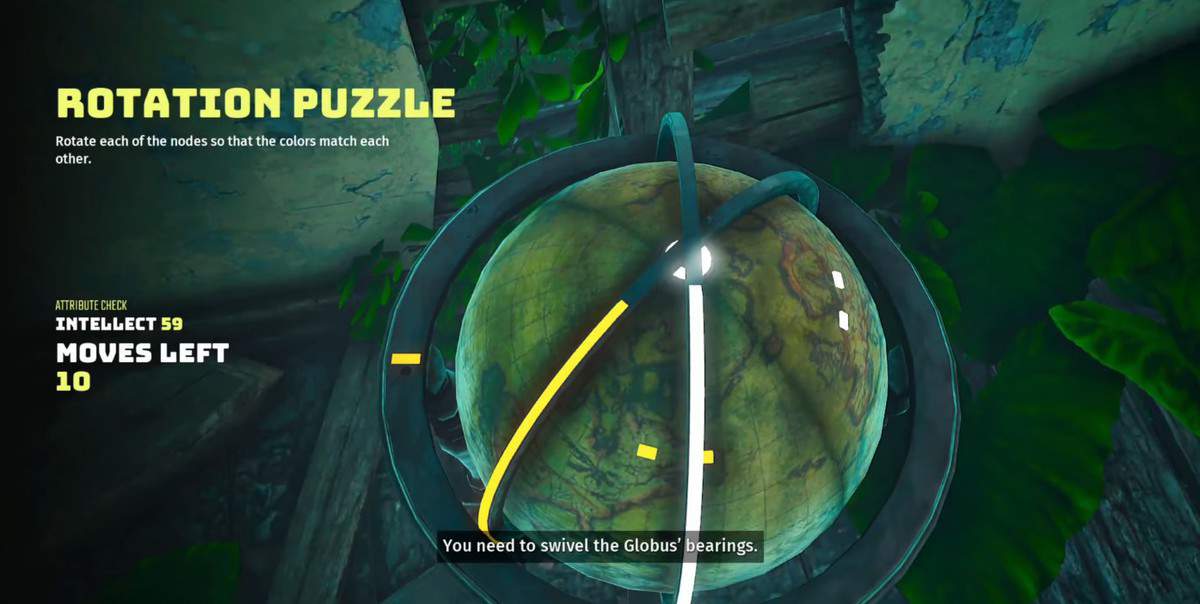 There are 24 of these gadgets in the game that you can get your hands on. However, to obtain the Old World Gadgets trophy and achievement, you’ll need to find only 15. There is normally more than one Old World Gadget of the same type. However, you only need to get one Gadget of each of the fifteen unique types for acquiring the aforementioned trophy.

Whenever interacting with these gadgets, you’ll prompt a puzzle. Solving them is quite simple, and the instructions will be displayed on your screen. Once a puzzle is resolved, you’ll be able to grab the relevant Old World Gadget.

There are a total of fifteen Open World Old World Gadgets, and they can be found at any time. Each gadget type features 3-5 gadgets. However, you only need 1 type of each for the trophy.

Whenever you interact with one of the gadgets of each type, a side quest will be triggered, allowing you to gather more gadgets of the same type.

Clothes-Soaker
There are five of this type of Gadget available. The first one is at Bricktown.

From the Bricktown waypoint, descend the stairs due north. Then, turn left and head inside the laundromat. There, you’ll find it on a washing machine. Solve the puzzle and grab it.

The other four clothes-soakers can be found at Krossway 3G, Shaftiloo, Leftovers 6I, and Hut Hut.

Once you collect all five gadgets, you’ll earn some loot as well as some decent XP.

Fry-Sparker
There are five Fry-sparkers spread across the Biomutant’s world. You can find the first one at Bricktown.

From the waypoint, make your way underground towards the west. On your left, you’ll see a rundown shop with a cow logo on it. Head inside and ascend the stairs to find the first Fry-sparker. Solve the puzzle on the microwave to obtain it.

As a reward for obtaining all Fry-sparkers, you’ll get a new ultimate add-on tool that you can use to enhance your melee weapons.

Flush-Stool
There are five gadget pieces of this type as well. The first one can be found at Bricktown.

During the main quest in Bricktown that sees you fighting the Morks, head left at the top of the stair after the fight. Go up the next set of stairs and turn to the doorway on your right.

Now, look for the wooden stairs. Towards their left, you’ll find a bathroom. Solve the puzzle and grab the Gadget from there.

The other four gadgets are located at Suburbia, Thoroughfare, Clearway, and Aerodrome.

Acquiring all five of the gadgets earns you a decent chunk of XP, a few health items, and legendary washed-out jeans.

Twing-Twang
There are five of Twing-Twang gadget available. You’ll find them at Leftovers 6E. Solve the puzzle on the guitar to obtain each one of them.

Raylighter
The first Raylighter is located in Suburbia. Head to the west side of the town. There, you’ll see a rundown brown house. Enter it and find the required Raylighter inside a jammed door in the basement.

The other Raylighters can be found at Krossway 3I, Shop Shop 5K, Krossway 10E, and Fixer-Upper 10G.

Your reward for collecting all five of these gadgets will be a nice chunk of XP.

Terra-Globus
To obtain the first one of the five Terra-Globus, head to the south of the Tree of life in Suburbia. It’ll be inside the house at the center of the region. Solve the puzzle and obtain the desired Gadget.

As a reward, you’ll get a new ultimate melee base part in the form of a giant globe, which can be crafted into a weapon.

Stringplonk
There are five different Stringplonks that are up for grabs. The first one is located at Leftovers 2E.

As soon as you reach the Island, take down the small hoard of enemies that you’ll encounter and head inside the plundered house. There, solve the piano puzzle to obtain this Gadget.

The other four gadgets are located at Factorium, Ranchu Makeglow, Fixer-Upper 10H, and Leftovers 6L. You’ll be rewarded with a keyboard-looking melee weapon as a reward.

Stronkbox
There are five Stronkboxes, spread across the Biomutant’s world. The first one can be found at Motojus Station, east of Spurftop, where you meet Trim Furfur. After dealing with the enemies, head inside, solve the safe puzzle and obtain the Stronkbox.

The other four Stronkbox Gadgets are located at Leftovers 6J, Shopperia 8K, Brickbrack 11G, and Leftovers 7E area. The reward is a new melee base weapon.

Radionic
To obtain the first one of the five Radionics, head to the southwest of the Lotus Fortress in Chugdepot. You’ll find the desired Gadget in one of the northern buildings. Solve the radio puzzle to obtain it.

Eye-Box
You’ll find the first Eye-box Gadget to the west of the Netra Fortress at Smilo Shopperia. Takedown the two Goatmen and head inside the shop. Solve the puzzle on the TV to get this Gadget.

Ring-Dinger
The first Ring-Dinger gadget can be found at PeekSpot 41, north of Quirkquarp Outpost. Deal with all the enemies and then climb up the rope to the Peekspot. Finally, solve the puzzle on the phone and acquire this Gadget.

The remaining four Ring-Dingers are located at Krossway 3G, Leftovers 9H, Motojus Station, and Krossway 8K. The reward is some XP, and a weapon called Handle.

There’s a bright red phone booth to the northeast of Floatboat where you meet Lump Muffin. Solve the puzzle and grab this Gadget.

The remaining four Pling-Plong-Booth gadgets can be found at Krossway 3I, Krossway 7J, Krossway 8K, and End-of-the-Line. As a reward, you’ll get a nice chunk of XP.

Bleep-Bleep Cupboard
The first one of the five gadget pieces of this type is at Munchhouse 7I, to the west of Wump village in the eastern half of the Yerpfields region.

After dealing with the critters and goop monsters, head upstairs to solve the puzzle on an arcade machine and obtain the desired Gadget.

The remaining four gadget pieces of this type are located at Munchouse 9K, Shopperia 5D, Aerodrome, and Clearway. As a reward, you’ll get a new ultimate Top Mod that can be attached to any ranged weapon.

Spiral Groover
There are three Spiral Groover available in Biomutant. The first one is located at Thoroughfare, just to the west of Granito Outpost in the Knupstonies.

Fight off all the enemies and head inside the blue house on the north side of the street. Make your way to the second floor, solve the puzzle and obtain this Gadget.

The remaining two gadgets can be found at Fixer- Upper 6K and Fixer-Upper 10E.

On collecting all three, you’ll earn the Spiral Groover ultimate muzzle (a ranged weapon) as a reward.

Mindmonitor
There are five Mindmonitor gadgets available in the game. The first one can be found at the Fume Foundry, to the southwest of Beneath Outpost.

The computer puzzle to obtain this Gadget is located in the building at the far east of the complex. The other Mindmonitors are found at Frozy Brickbrack, Sparkplant, Plant Hut, and Pingdish 3F.

These Old World Gadgets are tied to either the main story quests or side quests. Unlike the first 15 old world gadgets, picking these up will not initiate any side quests to find more. There can be one or more than one gadget of each type.

If finding the first 15 gadgets didn’t get you the trophy, try locating these gadgets, as some of them are also known to add to the trophy counter.

Pingdish
There are several Pingdishes that you can find in the game. Usually, you’ll get secondary quests when you enter the hazard areas on the map. Then, another side quest gets added to your log to find a protective suit against a particular hazard. This side quest, in turn, leads you to a Pingdish.

Twirly-Wheel
This Gadget is located at Murkadorpus Outpost, and you’ll automatically obtain it during the main quest, “The Tribe War Begins”, provided you sided with the Myriad Tribe.

Pipes
This Gadget is located at Subnautica Station. You’ll automatically get this Gadget during the main quest, “Skronk Salvage”.

Power Nodes
This Gadget is located at Subnautica Station. You’ll automatically get this Gadget during the main quest, “Skronk Salvage”.

Bon-Bon Gummy
This Gadget is located at Krossway 7J. You’ll automatically obtain it during the main quest, “Bon-Bon Gummy”.

Circuit Breaker Box
This Gadget can be found at Smilo Shopperia. There are more than 5 of them in the game. It is used during the main quest, “The Mekamjut”.

Arcshooter
It is located at Quirkquarp Outpost. It is part of The Arcshooters main quest that tasks you with climbing to the rooftops and disabling rival artillery and conquer the Outpost.

Mekafingro
This Gadget is located at Mekastadium. It’ll automatically be used during the main quest, “The Mekafingro”.