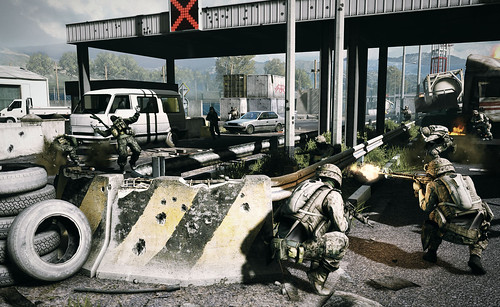 If you’re a PS3 player who’s been playing Battlefield 3, chances are the in-game’s VOIP has not been working properly since launch. Well, you should boot the game now as that problem is now officially solved.

The patch, which is mandatory, is only 11MB in size and seems to fix the VOIP issue only. PlayStation 3 users experiencing the dreaded “input lag” will need to be a bit more patient, as that particular niggle is still not addressed and DICE has not given a time-frame on when it will be fixed.

In other patch news, there’s supposed to be a significant patch update coming this February for all three platforms. The patch is supposed to fix a few things. Namely: the USAS-12 shotgun equipped with Frag rounds being overpowered, players spawning and immediately using their mortars to cheese their way through kills, the MAV exploit that snipers love so much and possibly more.

For those uninformed, the MAV exploit happens when a recon uses their MAV to fly another player to places where they’re not supposed to be in. This led to annoying snipers and squads ruining the game for everyone.

Aside from the things mentioned, what are the major things DICE should patch in BF3? Let’s just hope they address all the major issues until the game’s next expansion comes along.