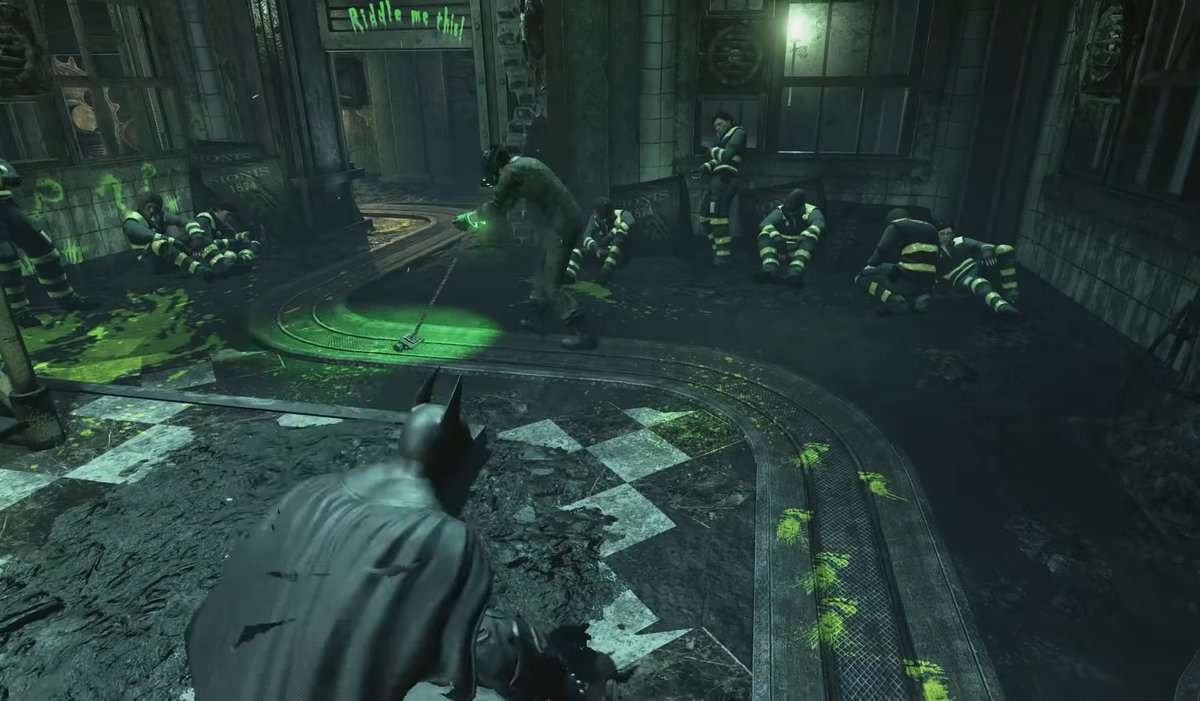 Riddler has a unique way to keep Batman busy working out several clues to solve his puzzles. In Arkham City, he has given Batman the daunting task of finding all the hidden trophies, deactivating all the cameras, and finding other objects of value.

You will need specific gadgets and upgrades for some of these and if you come across any trophy that you can’t collect, just mark it on your map so you can collect it later.

How should you mark the location of that trophy on your map? Well, during the Steel Mill part of the game, you will learn how to mark Riddler trophies on your map, so remember that.

All the collectibles are in the Park Row area of Batman Arkham City.

DA campaign special: get two votes, for the price of one.

It’s far from PURRFECT, but she calls it home.

You’ve been warned. People aren’t the only unstable part of this city.

If you find the name, does the Cash come hand-in-hand?

This den is where the vicious animals take your treasure, is it theft, if it’s already stolen?

Do you have Strange thoughts? Maybe you should seek help?

I am an actor who can transform a film with the final cut. Who am I?

Six legs went in and only two came out. Where am I?

BANG! BANG! Order in the court.

Acing the chemistry test will illuminate you.

Has this flower turned over a new leaf?

I wonder how you can land an appointment with this milliner? Perhaps it would be best to book?

All the collectibles in the Amusement Mile of Batman Arkham City.

These questions can only be answered from an unusual perspective. Can you get yourself there?

Which acrobat family gambled with their lives, and has now been left to fly solo?

If she is the ROOT of evil, how could anyone be expected to CONTAIN her?

Always a shining example of justice? Not if you ask me.

Would an invitation to party like the gods be a bolt out of the blue?

This place has taken a TURN for the worse. Is it a little BEAR for your tastes?

If you’re afraid, don’t be scared to crow about it.

Look out! Can you see where the madness began?

Park in his spot and you may just get a ticket.

All the collectibles in the Industrial District of Batman Arkham City.

Breaking news! Get out while you still can.

Air, sea, or land. It would be criminal not to use these wise guys, wouldn’t it?

Was this parasite ratted out, or does he continue to plague Gotham?

Does Zsasz still pose a threat? This guy called to find out.

Did you hear the HOLE story of how Black Mask escaped?

If you’re planning on making your mark in Arkham City, you’ll need a special kind of realtor.

Can you find this cool couple before the romance thaws?

The following collectibles are in the Subway area of Batman Arkham City.

When you are inside the train in the west tunnels. Search for a mirror and when you use the detective vision, you will be able to see the reflection in the mirror.

BOARD at drive-time? I’m not going to broadcast any more clues.

Coming back from the dead is cheating on any day of the week.

It’s vacation time. Where shall I go? Somewhere venomous?

This Killer was collared, but is he now on the loose?

These collectibles can be picked up from  The Bowery area of Batman Arkham City.

My intellect towers above yours, Batman. I wonder if you’ll ever solve this riddle?

The feuding families always sit down to a good meal. Will there be a massacre?

Cowboy, trilby, or bowler? Hats off to anyone brave enough to try one on.

Do you need to look SHARP to campaign for change?

Was the writing on the wall from the moment you entered?

Arkham City is not a place to be rich or famous. Bruce Wayne has never felt quite so wanted.

You’re a dummy if you don’t try and buy one.

Studies have shown that if you’re not on your best behavior, you’ll come out crazy. How Strange?

You don’t want to be caught off-guard in this place, do you?

You don’t have to be crazy to shop here, do you?

They say the more things change the more they stay the same. Which dummy said that?

Once assembled, do these two become one again?

Surely someone was clowning around when they qualified this person?

Do you need to hammer it home? Everyone knows Harley is stupid.

Who can BOYLE and Freeze at the same time?

What’s a funnyman without his box of tricks?

All the collectibles in Museum in Batman Arkham City.

Who’s in control here? The puppet or the puppeteer?

Was he framed? Or does it run in the family?

Have Joker’s pets laughed themselves to death, or just eaten too much?

See no evil, hear no evil, speak no evil, or there will be explosive consequences.

Can anyone TOP the Penguin when it comes to the full VIP treatment?

All the collectibles are in the Wonder City area of Batman Arkham City.

Crime is a global issue. You’ll never stop it, Batman.

Read all about it! Is this a sign of the Times?

Do these demonic twins pose a threat?

Where can you get a wonderful view of the past?