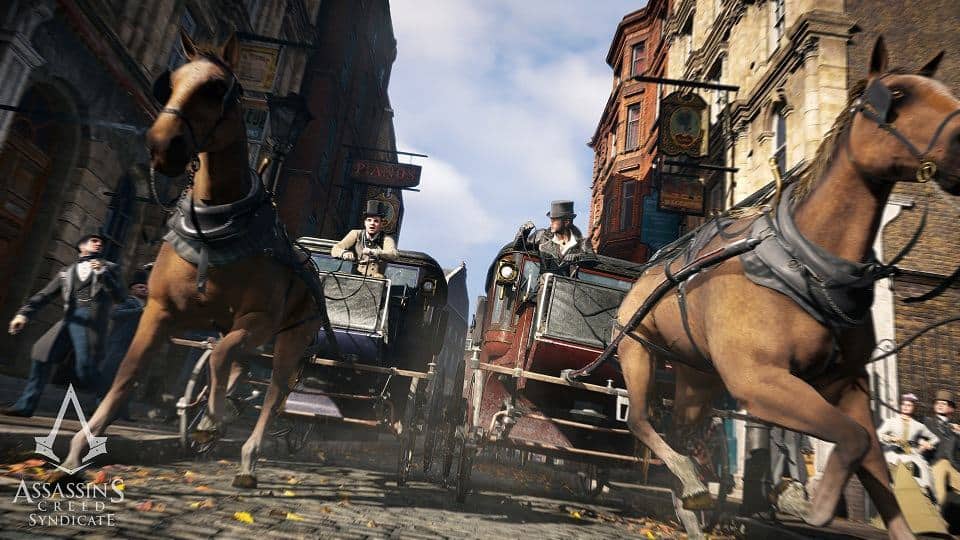 Bounty Hunts in Assassin’s Creed: Syndicate require you to capture a specific target and bring him/her to a secure location, either dead or alive.

Targets can only be kidnapped or knocked out while you are out of combat mode, so the presented scenarios can be quite challenging if your playstyle is offense-oriented.

While you do have the option to kill the target and then extract them via a carriage, you will not get 100% synch with the Bounty by doing so. Instead, the optimum method is to bring them in alive, either by knocking them out or by having to make them walk all the way to the carriage.

Locating the Target
The target can be easily located with your Eagle Vision. Normal enemies will appear as red, while the target appears as yellow colored. It is important that when you do locate the target, you identify the enemies close to them.

These enemies should be taken out right at the end, and you should always clear a path for the escape/escort of the target before getting close to him/her.

Securing the Target
By ‘securing’, you either force them to walk all the way to the carriage, knocking them out, or simply kill them off and take their body yourself. Of course, taking them in alive is the better option as it allows for 100% sync, which is what the remaining general tactics in this guide will focus on.

The best way to secure a target is to knock them out and take them yourself. However, that’s not to say that kidnapping has no benefits – forcing the target to move towards the carriage can help you navigate through tons of enemies, though it often becomes extremely difficult in linear and narrower paths to the carriage.

If fighting breaks out while the target is being escorted, he/she will simply try to run away. This can make things extremely complicated, which is why incapacitating them is usually the best option. That way, you can simply drop them off somewhere if you run into a set of enemies.

Choosing Your Strategy
Choosing your strategy for infiltration should go hand-in-hand with choosing your character.

Jacob is well equipped for more direct approach, causing havoc and letting his presence known. However, this can easily result in the target running away, and is especially risky in more open areas.

Jacob’s strategy tends to work best in tighter target locations where there is a large cluster of enemies.

Getting too caught up in fighting can result in the target making a run for it. You also cannot tackle or secure the target while in combat mode, which can make Jacob a touch difficult to carry out bounties with.

Then again, shouldn’t need to use that strategy at all in a game where stealth plays a big part, and Evie excels in it. Her skills are more stealth-oriented, and ideal for carrying out bounties.

You can use her many tricks to pick out enemies one by one, simply isolating the target and going in for the extraction. The harder part with Evie though is the extraction itself. Maintaining stealth during infiltration is easy, but maintaining it after the target is secured is rather difficult.

It’s best to incapacitate the target, leave them somewhere safe, clear the path to the carriage, then come back for them.

If you’ve managed to kill majority of the enemies, especially in more open areas, kidnapping/escorting the target is much easier than incapacitating them as the target makes it easy to work past enemies.

The Great Escape
Once you have secured the target in whatever way you please, it’s time to find a carriage. Luckily, the Rooks always have one parked near the target location. The carriage is designated by a green icon on the map, which should make it easy for you to plan your path towards it.

You cannot put the target in the carriage if you are confronted by enemies, so keep this in mind as you make your way, or simply clear out the exit path for yourself before securing the target to make things easier.

Once you’ve dropped the target in the carriage, you’ll need to head to the area designated on your map. This will not end the bounty though if enemies are still in pursuit.

In such cases, lose your enemies first, preferably through some flash smoke bombs while you make your way to the designation.