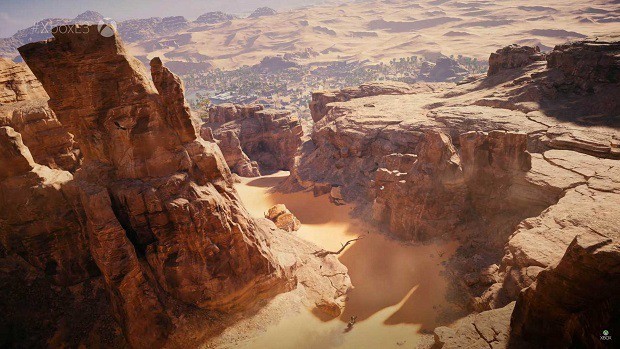 Assassin’s Creed Origins Sapi-Res Nome Side Quests Guide to help you find and complete all available optional missions in Sapi-Res Nome region of AC: Origins. These AC: Origins side quests are not terribly difficult. While attempting these optional missions, you should try to take advantage of your Animus Pulse and Senu as much as you possibly can.

We have detailed everything you need to know about finding and completing all the Optional Quests in the Sapi-Res Nome region of AC: Origins.

Conflicts of Interest
Rewards: 1250 XP, a shield (only if you save  Zervos’ boat).

A table is unlocked during The Scarab’s Sting main quest in Sais village, examining it will give you the option of starting this quest. Once done, you need to speak with the merchants of Sais about Zervos.

After you are done, wait for nightfall and follow the suspicious merchants and they will lead Bayek to a building in which Zervos is hiding. Speak to him and you will get a new objective.

Now you need to use Senu to locate Zervos’s boat and either steal or destroy it. Lastly, speak to Zervos again to complete the optional quest. For destroying the boat a flaming arrow will do the trick, otherwise you have to kill the guards and once on the boat use your arrows to kill anyone who follows on their own boats.

A table is unlocked during The Scarab’s Sting main quest in Sais village, examining it will give you the option of starting this quest.

First, you need to find and speak to Amosis near the docks. From there, you need to use Senu to locate Jeska.

After you find Jeska, you need to eliminate hippos all around the island followed by speaking to Jeska and following her to her village. Lastly, you need to kill the looters and speaking with Jeska again before carrying Pentu to the Farm.

A table is unlocked during The Scarab’s Sting main quest in Sais village, examining it will give you the option of starting this quest. This is a fairly simple quest.

On the rooftops in Sais, you will come across plenty of archers. You basically need to defeat all the archers in order to complete the quest. There are six archers for you to deal with and Senu can easily help you locate and mark them.

A table is unlocked during The Scarab’s Sting main quest in Sais village, examining it will give you the option of starting this quest. Speak with the Brewery Worker to learn more about the missing assistant, who is imprisoned in Psenemphaia Hideout.

Use senu to find him, once done you need to find Nessamun and free him followed by speaking to him in order to complete the optional quest.

You can either use stealth or use combat and defeat all enemies as their defenses are weak, to get to and free Nessamun.

You need to head to the farmer’s house and carry the crops to the cart. Once you are done, you need to use Senu in order to locate the tax collector before finding him and killing him in order to complete the optional quest, you can chose to deal with or run away from his bodyguards.

Rewards: 1250 XP
Once you complete all four of Harkhuf’s quests, you are tasked with finding and protecting Harkhuf from Nikiou Fort.

You can approach the Nikiou Fort in any way you prefer but after speaking to Harkhuf, you are asked to find and acquire the key from Sefetu. This task can be made easier if you find a secret passage to the fort in its east part allowing you to skip past the palisade.

Once you have the key in your inventory, you need to free who is kept in a basement in one of the buildings. You can get there by going through a hatch and escort Harkhuf outside Nikiou Fort followed by speaking to him in order to complete the optional quest.

Rewards: 1500 XP
After accepting the side quest from a woman who is banging on a hut’s door you will be tasked with finding and assassinating a tax collector, you need to use Senu in order to find the Tax Collector and then kill him. If he is found in the fort then you can infiltrate at night and kill him in his sleep without anyone being none the wiser. As simple as that!

Taste of her Sting: Sapi-Res Ruins

You need to head to the middle of Sapi-Res Nome and investigate the area. After investigating all available clues on land, dive into the water and find the body as well as the Treasure to complete the Optional Quest.

The New Kid in Town

Rewards: 1500 XP
After acquiring this side quest from the southeast edge of Letopolis by speaking with Ramessu, speak to Nehi followed by retrieving the cart, be careful of the bandits hiding in the nearby ruins waiting to ambush you, maybe you could use stealth and ambush them instead, beware of tamed lions though. Go back and speak to Nehi, check the hieroglyphs on the wall in his hut and meet with Ramessu. You must now examine hieroglyphs from three other huts. Speak with a marked person first and then enter a hut. You will receive Hieroglyph Papyrus.

Once you acquire the Papyri Puzzle, solving it will give you a location of the Temple of a Million Years, head to the ruins on the southwest edge of the area. After you get there, interact with all the objects inside the main chamber of the ruins to complete the quest, and do watch out for Cobras in the main chamber.

Rewards: 1500 XP
First, you need to find Chief Nito in the Temple of Hours. Once done, use Senu to locate the workers and speak to them. At this point, you will be asked to rescue the workers from the collapsed tunnel and carry Ipuy out of the tunnel. Once you are done, you need to help Baba and head back to Nito in order to complete the optional quest.

Rewards: 1500 XP, Sword of Ptah.
During the previous side quest near the place where the second worker was, you need to check the table in the room with scrolls at the end. After acquiring the side quest, you need to head across the Nile to come across a man with a blade.

Speak to the man and proceed to the nearby Bandit Camp. From there, search the closely located Hyena Cave to find a sword and complete the quest.

This is all we have in our Assassin’s Creed Origins Sapi-Res Nome Side Quests Guide. If there is anything else that you would like to add, let us know in the comments section below!