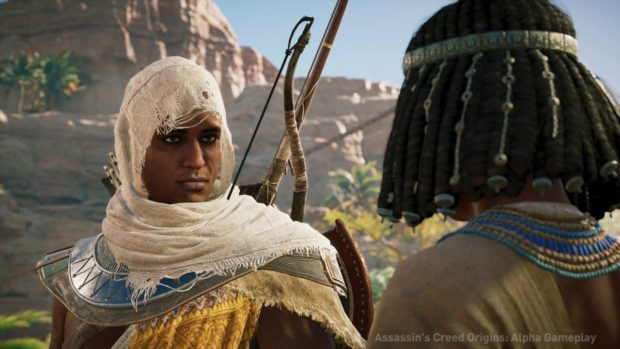 Assassin’s Creed Origins download size is pretty much the same as the most recent games for current-gen consoles and it is good to know these details ahead of game’s launch so that gamers can have enough time to prepare for the game.

Also, Ubisoft has partnered with extremely expensive French jeweler Tournaire to create Assassin’s Creed Origins headphones which are covered in 18-carat gold design bits which will cost you €50k.

That is not all, Ubisoft is also offering a bronze bust of AC Origins protagonist Bayek of which only 10 pieces are available. The bust on its own costs €12k which along with the headphones totals into €62k.

Ubisoft has been marketing Assassin’s Creed Origins but, many are skeptical about the game’s facial animations as many have reported that characters lack emotions on their faces. However, Ubiosft has explained that facial animations are still being worked on and the final product will be improved.

We have quite a few tombs in the game, and they range from being classical puzzles to navigation puzzles and navigation challenges. A lot of them are actually built off of the actual true tombs that we’ve researched.

Assassin’s Creed Origins is an upcoming action RPG in development at Ubisoft and is scheduled to launch on October 27, 2017, for PC, Xbox One and PlayStation 4.