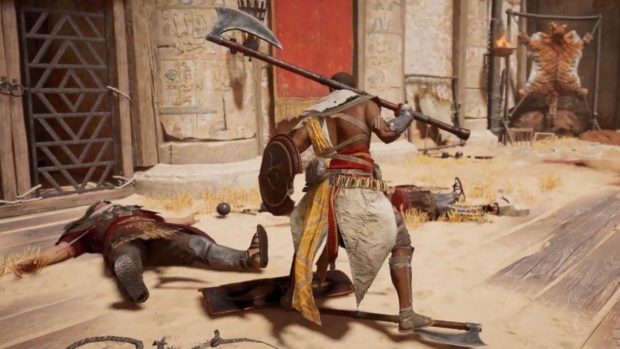 Assassin’s Creed Origins Faiyum Side Quests guide will discuss all the side activities you can perform in this area. Completing these activities is going get you rare gear, XP, and plenty of other loot you can use to complete main quests and hunt down your targets. There are a handful of side quests in this area; we recommend that you sync with a viewpoint to unlock the entire area.

For more help on Assassin’s Creed: Origins, you can check out our Legendary Weapons Guide, Mounts Unlocks Guide, and Tombs Locations Guide.

Murder in the Temple
Reward: 1000XP
It is a level 25 rated quest. The local Phylakitai wants you to help with a murder investigation. Head to the marked location and investigate the area. You will have to investigate 4 items and after that, speak with the quest giver and hunt down the bandits to free the priest.

It is a level 23 rated quest. Speak with stonemason’s wife and then find the stonemason and talk to him at the construction site. Head to the head to the Karanis Temple and deal with some guards there, then find out what’s going on beneath it. Go underground and swim through the water to get the objective item.

Get back in the town and go to your new objective, kill one guard and enter the building. Go through the tunnels and face several guards on the way. Investigate the area after killing all the guards and this will give you a new location. You will have to go to the location and talk to a man, after that things will breakdown into a fight so kill all three of the men and quest will be over.

Curse of the Wadjet
Reward: 3750XP
It is a level 25 quest. Speak to the stuttering man in Soknopaiou Nesos and find the caretaker’s shrine. Investigate the shrine and this will give you the location of tunnel, smash the jars ahead and kill all the snakes. Then you will have to rescue a hostage, after killing some guards, this is a normal rescue mission so just do it and speak to the person you rescued at the end and the quest will be over.

Rebel Strike
Reward: 1000XP
It is a level 24 rated quest and will be available after completing A Rebel alliance. Find Theodoros’s rebel troops and raid the soldier camp in the hills. All the enemies in the enemy camp are marked so just raid with allies and kill the marked enemies. There are almost 10 guards and after you kill them all the quest will end.

The Bride
Reward: 2250XP
It is a level 25 rated quest. Speak with the girl on a high cliff in Soknopaiou Nesos. Bring the girl to the Heron Feather. Just go towards water and just shoot a Heron bird and loot the body to get that feather.

Sobek’s Gold
Reward: 2250XP
It is a level 25 rated quest. A young boy is accused of stealing gold, help prove his innocence. So you will have to bring two lost items, use senu to get the locations. First one will be underwater and second one will be on a vessel. Get the items and you will get into a fight. Deal with it and finish the quest.

Forging Siwa
Reward: 1,500 XP, Legendary Sickle Sword
It is a level 25 rated quest. The who is at the northern streets of Euhemeria and tells you to check out the Valley Market. Use siwa to get the location of a merchant and there you will see a girl. Follow the girl you will see and rescue her mother.

Demons in the Desert
Reward: 2500XP
Speak with the madman in the streets of Dionysias Caravanserai. Rescue the boy from the tower, follow the boy and help the survivor. Find and rescue the farmers and escort them back. Rescue the boy’s father.

This was our Assassin’s Creed Origins Faiyum Side Quests Guide. If you have any questions please take to the comments below!