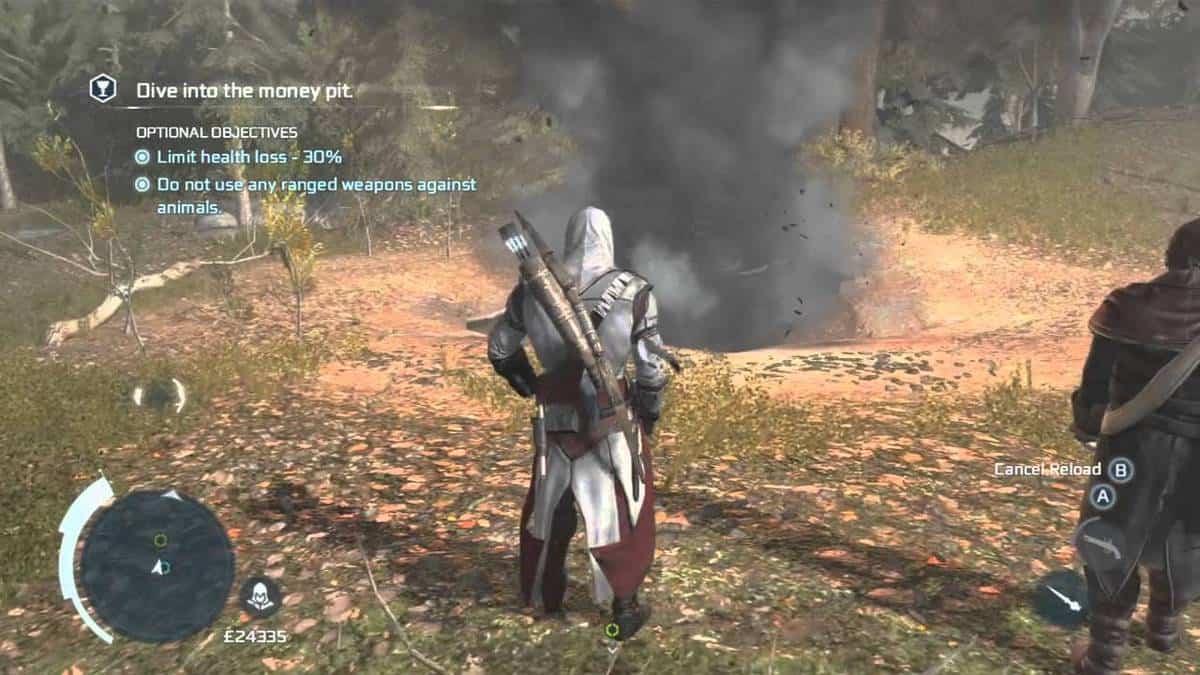 Assassin’s Creed 3 expands its open-world genre further than any of its predecessors through the introduction of exciting missions that range from sea battles to solving riddles and more. Our guide here will focus on Assassin’s Creed 3 Naval Locations, completing which will reward you with Captain Kidd’s treasure.

These Naval Locations are basically there just to hunt the lost booty of the legendary Captain Kidd himself.

This reference guide will aid you in accomplishing some of the demanding tasks that you might encounter during your journey to find the treasure.

These special missions are unlocked by retrieving all Peg Leg Trinkets and giving them to Peg Leg.

Perform Three Ledge Assassinations
These are pretty easy if you can find the right guards to take out. The first one is right above you. Go around to the front, and when he comes near, grab him by the belt and do your thing.

The second good opportunity is in a large room with a hay bale and three or so guards. Dive into the hay bale, and take out the first two quietly.

After that, at the far end of the room you can kill the third one from a ledge on the left.

The third one can be found after taking the treasure in the bedroom. The jumping path from the courtyard will lead you to his feet.

Limit Health Loss to 33%
You should learn the route properly, save, and then attempt at this and the next objective. Make sure that you avoid their fire, and kill one of the guards, point yourself to the other and press X. This should allow you to combo into your next attacker and take him out as well.

Complete all Constraints in one playthrough.

Afterward you will be attacked by one of the soldiers. In order to defeat him without losing any health, dodge his powerful attack, approach him from behind and knock him down with the jump button. He will be an easy target on the ground.

Try to achieve a full synchronized killstreak before stronger enemies show up. Most of the group of enemies you’ll encounter will be basic enemies after which stronger ones which can not be killed when in Sync

Dead Chest Challenge
This will be fun, but you’ll have only one single chance at getting some of the goals.

Perform Running Assassinations (3)
During the chase, you’ll come across a few standing enemies. Hit X while running to take them out.

Stay Withn Range Of Your Target (40 Yards)
This is easy if you can avoid getting slowed by the environment and the enemies. Just hold RT the entire way and it should be no problem.

Kill the Target Before He Reaches The Cave
This one is difficult, because boy does that guy run fast. It’s very hard to actually get an easy chance to kill him during majority of the chase.

However, you can actually get to a final leap above him just before he enters the cave, which should give you a nice opportunity to perform a good takedown. Good luck though!

Complete All Objectives in Single Playthrough:

Pretty self-explanatory. Once you are done with each objective, replay the mission and repeat all the objectives mentioned in a single go

Reach Octavius within Time Limit
This is actually very easy, provided you don’t make too many mistakes. Just hold RT and you should be there with a few seconds to spare.

Do Not Fall in the Water
Quite easy – just be careful when escaping the ship.

Reach The Assailant’s Location within the Time Limit (1:00)
Climb the bear, and then follow up from the mammoth’s tusk and over the bells.

Solve the Riddle Within the Time Limit (1:00)
If you want to be quick about this, just change the time on the grandfather clock to 4:50.

Solve the Riddles within Time Limit (5:00)
There are four riddles here that you must solve. They are all fairly easy to solve. If you get lost or something, you should use your ever-reliable eagle vision.

The puzzles themselves are very simple, and you can really do this with a couple or so minutes to spare. Align the largest object with the largest socket and you should have no problem following up to complete the puzzle.

Don’t Use Ranged Weapons Against Animals
This means no bows or guns. This is fairly easy, though wolves tend to get a little unpredictable.

Limit Health Loss (30%)
The wolves will create problems for you for this objective. This can get extremely irritating and is actually much more difficult than it seems.

It requires some amazing timing for you to get the quick-time events correct. Pat yourself on the back when you actually manage to do so.