Nvidia GTX 1660 Launch – Has it Killed All Competition from AMD? 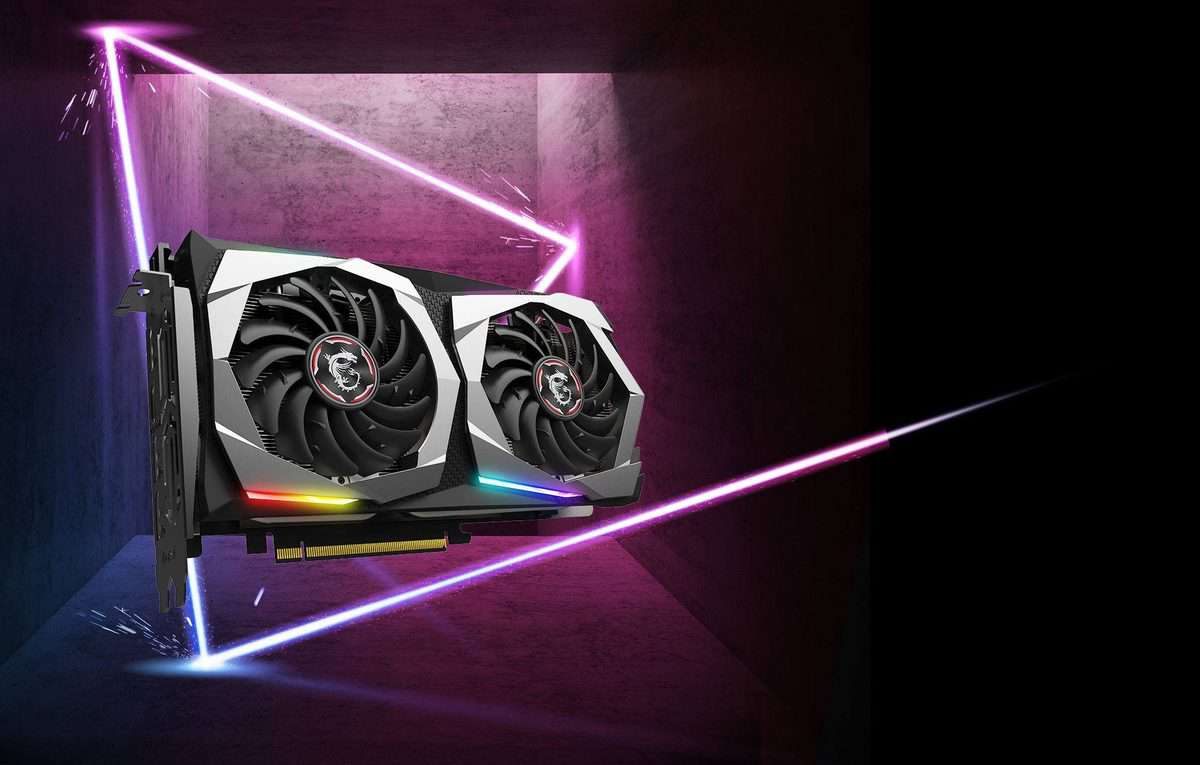 On March 14 2019, Nvidia launched the GTX 1660, the younger brother to the recently released GTX 1660 Ti. The GTX 1660 launch was met with far more warmth by reviewers and consumers than the launch of the RTX cards and even the GTX 1660 Ti. Fairer pricing and a true successor to the GTX 1060 6GB meant gaming at max settings on 1080p on every modern title became possible for the budget-conscious builders.

The ridicule they got for the naming scheme of the 1600 series of graphics cards was perhaps deserved, but it was hard to deny that for once Nvidia had gotten their pricing scheme right with the 1660 Ti. The GTX 1660 Ti at stock speeds was competing with the previous generation’s GTX 1070 despite costing much less in MSRP than when the 1070 was available. Good job Nvidia.

Or maybe it’s not. Who knows what Nvidia is thinking right now…

What’s clear though is the GTX 1660, at an MSRP of $219, is Nvidia’s attempt to annihilate any semblance of competition they had in the midrange and budget GPU market. The AMD Radeon RX 590 saw a sudden drop in pricing shortly after the GTX 1660 release, but even so the GTX 1660 remains the better card due to its similar price, lower power draw, and (depending on the board partner’s cooling design) superior overclocking headroom.

The RX 590 was already in danger of taking a major blow from the GTX 1660 Ti with an MSRP of $279. It managed to maintain some presence because fantastic cooling designs and factory overclocked models like the Sapphire Nitro+ RX 590 offered great cooling and enough overclock headroom at a decent price to beat some of the GTX 1660 Ti models companies like MSI and ASUS were selling for above the $300 price point.

The GTX 1660 6GB however has forced AMD to reduce the price of the RX 590 to a comparable price to the former, but it’s in the performance where AMD’s card is given a comprehensive blow. Furthermore, as we’ll show later in the overclocking potential and performance of some of the GTX 1660 models from certain board partners, the GTX 1660 offers enough headroom and tangible performance boost to come close to its bigger brother, whereas even the most heavily overclocked RX 590s cannot compete with the GTX 1660 Ti.

As seen from the spec sheet, Nvidia GTX 1660 is very similar to the GTX 1660 Ti. The two most noticeable differences come in the CUDA core count and the memory. Although both are powered by 6GB of memory, the GTX 1660 uses previous generation GDDR5 technology. Moreover, memory clocks are noticeably slower, and concomitantly the memory bandwidth is less than what you get in the Ti model.

To compensate for slower memory, Nvidia has boosted the base core clock speeds as well as the rudimentary boost speeds, albeit by a small increment. The rated power draw remains the same, though we expect that to vary drastically depending on the board partner model.

We’re especially impressed with the EVGA GTX 1660 XC Black card, which stands at the MSRP price point, has a very short length, but has a thickness equivalent to three slots instead of the modern standard of two. It’s not ideal for mini-ITX cases, but the beefy cooler on it gives a lot of overclocking headroom for both the GTX 1660 and 1660 Ti. 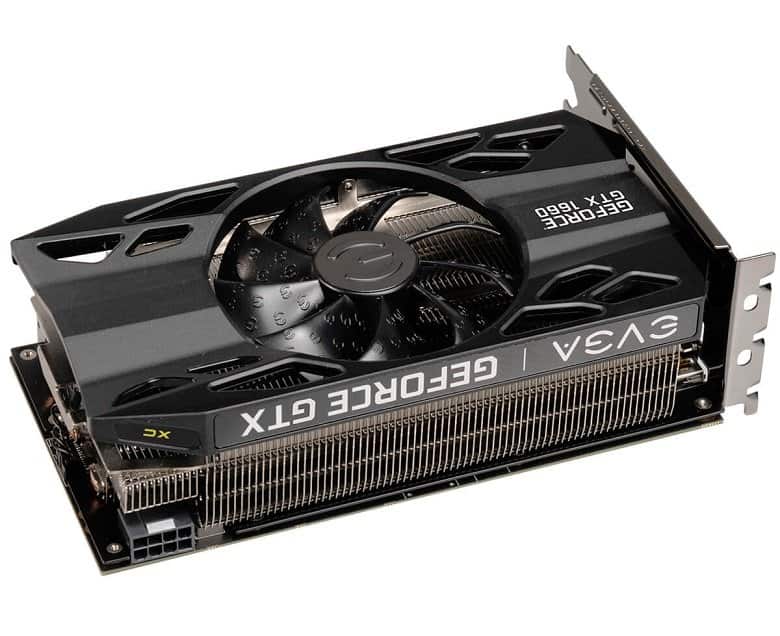 Compared to GTX 1660 models, the AMD models seem inferior in every way. Stream processors (AMD’s equivalent of CUDA cores) on the RX 590 and 580 are far greater, as is the overall video memory available, but the base and boost clock speeds are noticeably inferior, and the TDP of both is egregiously larger. Granted, this is older generation technology and should be given a pass, but considering that, at the time of writing, these are the only two mid-range GPUs from AMD that can hope to compete with the GTX 1660, drawing comparisons seems germane.

However, some of the board partners have released excellent GTX 1660 variants, such as the MSI Gaming X GeForce GTX 1660. Despite boosted clock speeds, the cooler on such cards allows for further overclocking of the core and memory speed to reach close to the performance of a reference GTX 1660 Ti. It is indeed true that some of the cards will cost more than the MSRP of the GTX 1660 by anything between $15-20, but with a bit of manual tweaking, it’s possible to get performances of the bigger brother while saving anywhere between $30-50.

Another great alternative is the EVGA GTX 1660 XC Ultra. Priced cheaper than MSI’s model, the higher power target allows for excellent overclocking similar to that of the MSI Gaming X version thanks to its dual fan system and robust heat sink.

The overclocking headroom of the GTX 1660 largely comes from its very stable temperatures. On average, you shouldn’t expect the card to go anywhere beyond 70 degrees Celsius at full load, provided you have adequate airflow in your desktop PC. The GTX 1660 can hit TDPs of 130 watts easily, and a boost of +150-160MHz on the core and roughly 1000MHz on the card is achievable. Such numbers should evidently but it within the same performance level as that of the GTX 1660 Ti.

Benchmarks below are courtesy of Gamer Nexus. Values displayed on these graphs are average FPS only. 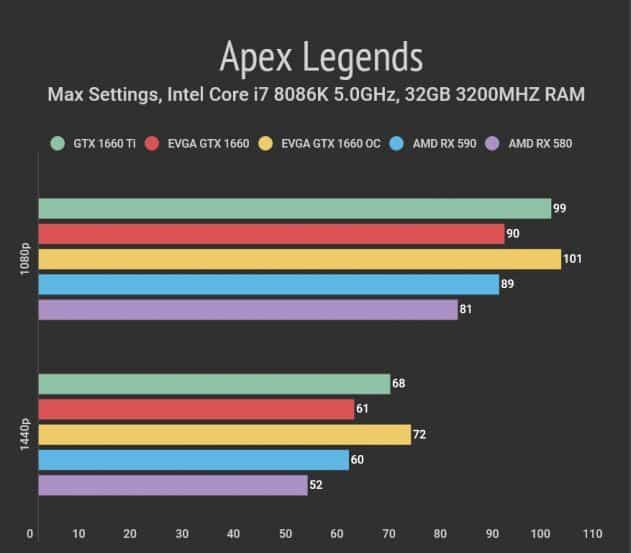 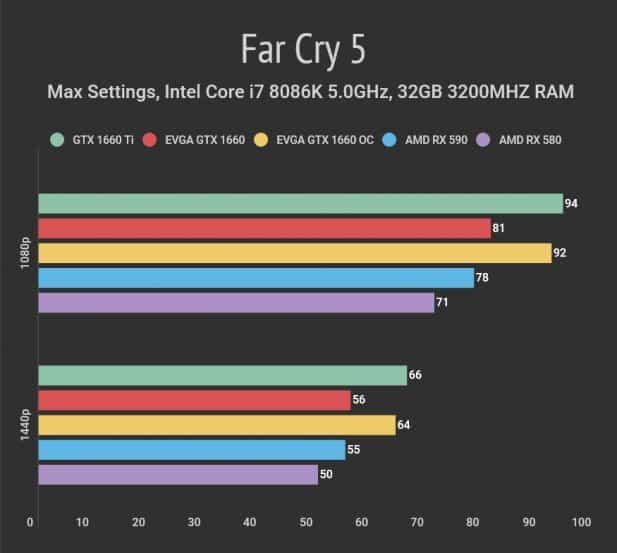 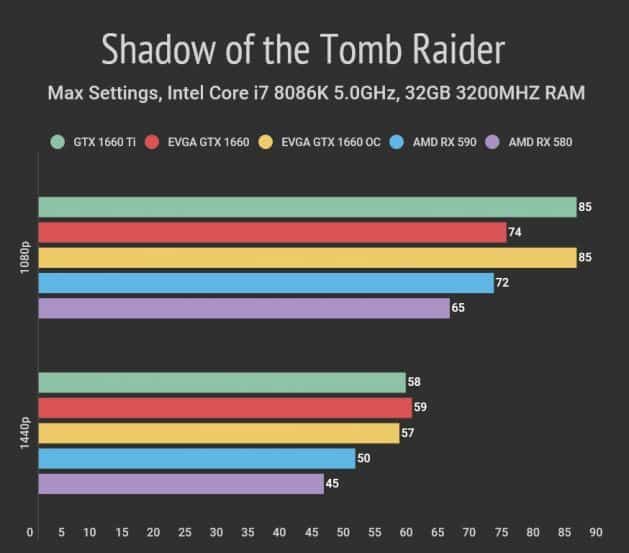 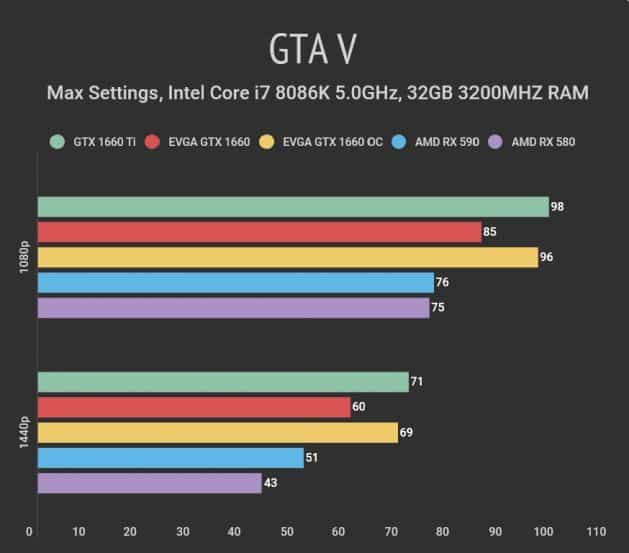 As indicated by these scores, the GTX 1660 performs exceptionally for a card below $250. The RX 590 and RX 580 are thoroughly beaten in just about every test. What’s even more interesting is how the GTX 1660 can reach the speeds of the stock GTX 1660 Ti when overclocked. This makes the GTX 1660 a great value prospect, given you can extract 1070 or 1660 Ti level performance from it with a little bit of tinkering.

Based on pricing, performance, and power draw, it’s clear that if the GTX 1660 Ti hadn’t already eliminated the RX 590, the GTX 1660 certainly has. Although prices of the RX 590 have dropped, the MSRP version of the GTX 1660 costs the same yet outperforms the 590 in almost every game. Furthermore, the power draw of the GTX 1660 is extremely efficient, and with the correct cooling solution, this graphics card can be easily pushed to match the speeds of the 1660 Ti.

It’s evident that with the back to back introduction of these two cards, the Radeon RX 590 is a card that would appeal to no one. Could the fate of the RX 580 be the same?

AMD can breathe a sigh of relief (for now) as the RX 580 can still benefit from the massive price drops. Some RX 580s are currently available for as little as $160, which puts them far away from the price point of the GTX 1660. We do worry about the RX 580’s future though, as Nvidia is very likely to release a 1050 Ti replacement (GTX 1650?) at a price point similar to the RX 580’s with better performance.

Until then though, the RX 580 remains a good option for budget gamers looking to purchase a viable and still relevant 1080p card for less than $200. It won’t be future-proof and given the possible release of Navi graphics cards in the future, the RX 580 doesn’t look like a good bet in the long run.

It’s clear that Nvidia is attempting to inundate the midrange GPU market with a value-focused graphics card and completely kill competition from AMD. AMD is taking its last gasp with the price reduction of the RX 500 video cards, and although the RX 580 could generate some fumes for a short while, the RX 590 is as good as dead due to the fierce competition and superior offering of the GTX 1660 at a great price point.

At the moment, the more relevant competition seems to be the GTX 1660 vs GTX 1660 Ti. With a decent cooler, the GTX 1660 has shown itself to be capable of reaching speeds of a stock GTX 1660 Ti. This indeed makes it the most attractive offer, and it’s plausible that the 1660 follows the footsteps of the GTX 1060 6GB as one of the best-selling cards of its generation.