Multi GPU Nvidia SLI and AMD CrossFire Still Worth It In 2019? 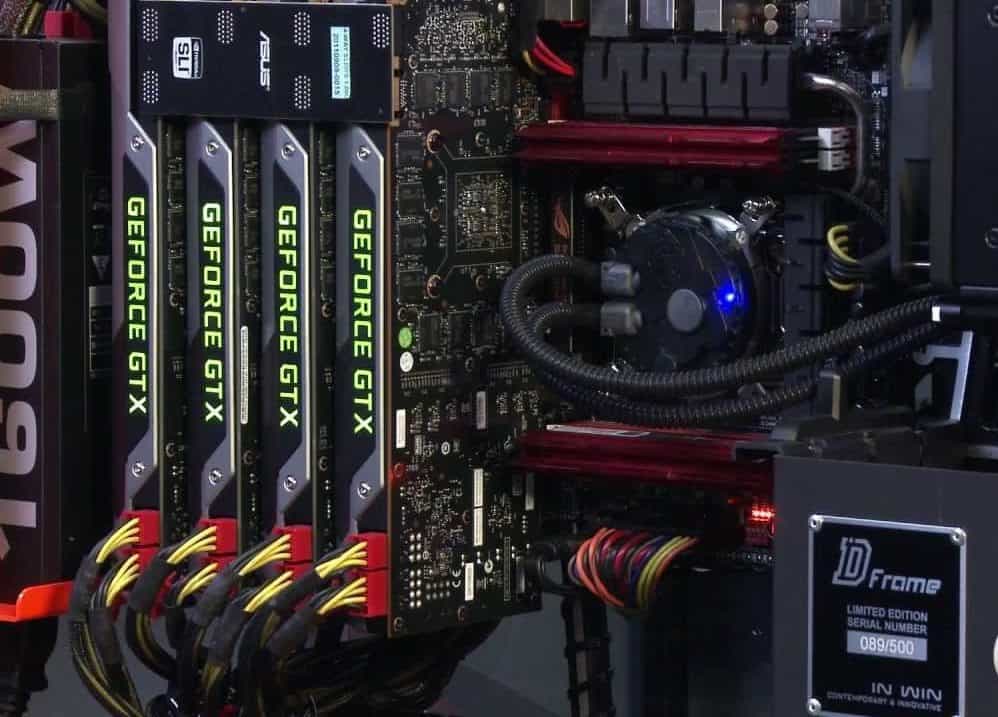 Not everyone has the budget to straight up buy a high-end graphics card to up their processing power, which is where the Nvidia SLI and AMD CrossFire technologies come to play. The technology companies’ idea was to allow users multiple GPU setups in their gaming PC. Cumulatively working to reach the potential of a higher GPU.

On paper, this sounds really nice. In fact, it is calculatedly less expensive. For instance, if you look at the average benchmark figures for, say the Nvidia GeForce GTX 1070 and the GTX 1080 Ti, you will see that the latter not only costs twice as the former, it also has an average bench which is about fifty percent higher than the GTX 1070.

So it should make sense that instead of getting the 1080 Ti for, say, $800 you buy two GTX 1070 for the same amount. Wouldn’t it double the performance? And won’t that be effectively better than a single GTX 1080 Ti (with only 50 percent improvement over a single GTX 1070)? But that’s the question: is it worth it, still?

What Nvidia SLI and AMD CrossFire Did For Multi GPU Support

Obviously, the idea behind SLI and CrossFire is to assist multi GPU processing. As with a number of other things, Nvidia was the one to introduce the technology first. Scalable Link Interface (SLI) is Nvidia’s home-curated technology that allows same chip GPU cards to be connected together. You could pick different manufacturers, but not different card even if they are from the same generation to connect up to four cards together. So a GTX 1060 SLI setup will only work with another GTX 1060.

AMD CrossFire, on the other hand, was released a couple of years later and replicated most of the same. There are but a few differences between the two multi GPU technologies. Firstly, you aren’t bound to connect exactly the same AMD graphics cards. Instead, you just need to follow the same generation i.e. you could use an AMD Radeon RX 570 4GB coupled with an AMD Radeon RX 580.

Other than that, the CrossFire technology now makes good use of the PCI 3.0 for connecting between the AMD graphics cards. Whereas, the Nvidia graphics cards still need a ribbon cable in order for Nvidia SLI technology to come in action. SLI is also restrictive insofar as their high-end GPU are concerned since you’d further need to include the SLI bridge connector to handle higher bandwidth.

Both technologies are either using Split Frame Rendering (SFR) or Alternate Frame Rendering (AFR) and perform consistently in line with each other. Just as the name suggests, splitting means each rendering task is split and shared by the multi GPU setup. On the other hand, AFR refers to rendering tasks being divided as a whole among the multiple GPUs of your gaming PC. 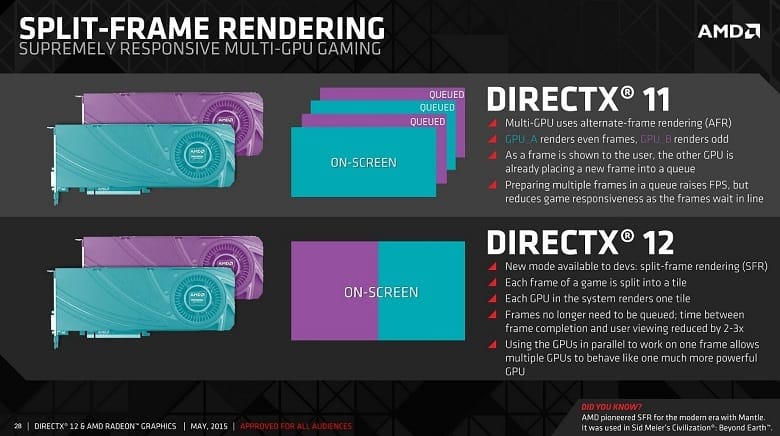 There surely is the AMD vs Nvidia debate alongside the CrossFire vs SLI question. Flash forward to the present and AMD has moved on from crossfire to mGPU support thanks to DX12. And SLI has further restricted their multiple graphics cards supported by SLI.

So as far as multi GPU support itself is concerned, we see AMD prepping to lead.

Rolling Back to The SLI and CrossFire Value Debate

It won’t be the first time someone’s questioning the true worth of both these technologies. And there is a good reason for it as well. Despite some really tall claims, neither Nvidia SLI nor AMD CrossFire has been able to live up to expectations. And now there is even a doubt over their future given a few indications we will discuss below.

Not The Potential You’d Expect
It made sense, buying one mid-range GPU that you can afford, wait a few months for its price to go down and then buy a second one. This should achieve one of two things: create unshakable value by making the overall deal cheaper, or offer a super high performing multi GPU setup. Sadly, there has hardly been a time when either SLI or CrossFire was able to actually double the performance or cut the price so low.

Not only that, the value of improvements offered by the multi GPU technologies isn’t the same now. There are hordes of new graphics cards, and the tech isn’t tailored the same for newer models. So in other words, you do get a performance boost but it is a long-shot from what multi GPU setups used to be marketed for.

Game Developers Aren’t Even On Board
Well, they are, but not the majority. You need to understand that in order for Nvidia SLI or AMD CrossFire to work, the video game developers first need to offer CrossFire and SLI support. And you know what happens when money gets involved, right? The developers need to first be sure that the extra cost of implementing the feature is justified.

And apparently, that isn’t the case. There is a large number of game developers who shy away from the expense because making a AAA game has never been as expensive as it is these days. Which means devs aren’t really pushing for it right now. And also consider that they will still need a potential chunk of their customers who would actually benefit from multi GPU computers. So there’s also a question on the potential number of multi GPU users.

What About Nvidia And AMD Themselves?
Sometimes, a good idea can die a natural death (there will be a better replacement every time) and it looks like a change of preferences has resulted in the same. For instance, AMD has said before that their level of interest and investment in CrossFire technology is highly dependent on the interest and investment that game developers are willing to put into it. Not only that, the company has even made it clear that down the line only new API types will multi GPU support.

So it is all but clear in their minds that SLI and CrossFire like technologies require more effort that they deserve. From the technology developers’ side as well as from the game developers’ side. Moreover, Nvidia has also shown indications that the time is up since they ditched SLI support for GTX 1060 – one of their more popular graphics cards. Also, dynamics have changed with the introduction of DirectX 12 as the API allows explicit multi GPU programming.

Explicit Multi GPU with DirectX 12 Changing Things?
With the advent of DX12, the hidden potential of the drivers was explored. And as touted, the API was used to change how multi GPU processing is done. With DirectX 11, the driver managed the multiple graphics cards and AMD created profiles. Explicit multi GPU shifts that job to the application running. As the job has been transferred to the application in question, it makes sense why AMD dropped marketing the CrossFire term.

DirectX 12 is able to show the graphics cards as a single linked adapter or independent adapters. There are choice benefits of the DX12 API here, like the system memory being bypassed while the memory is directly copied in GPUs.