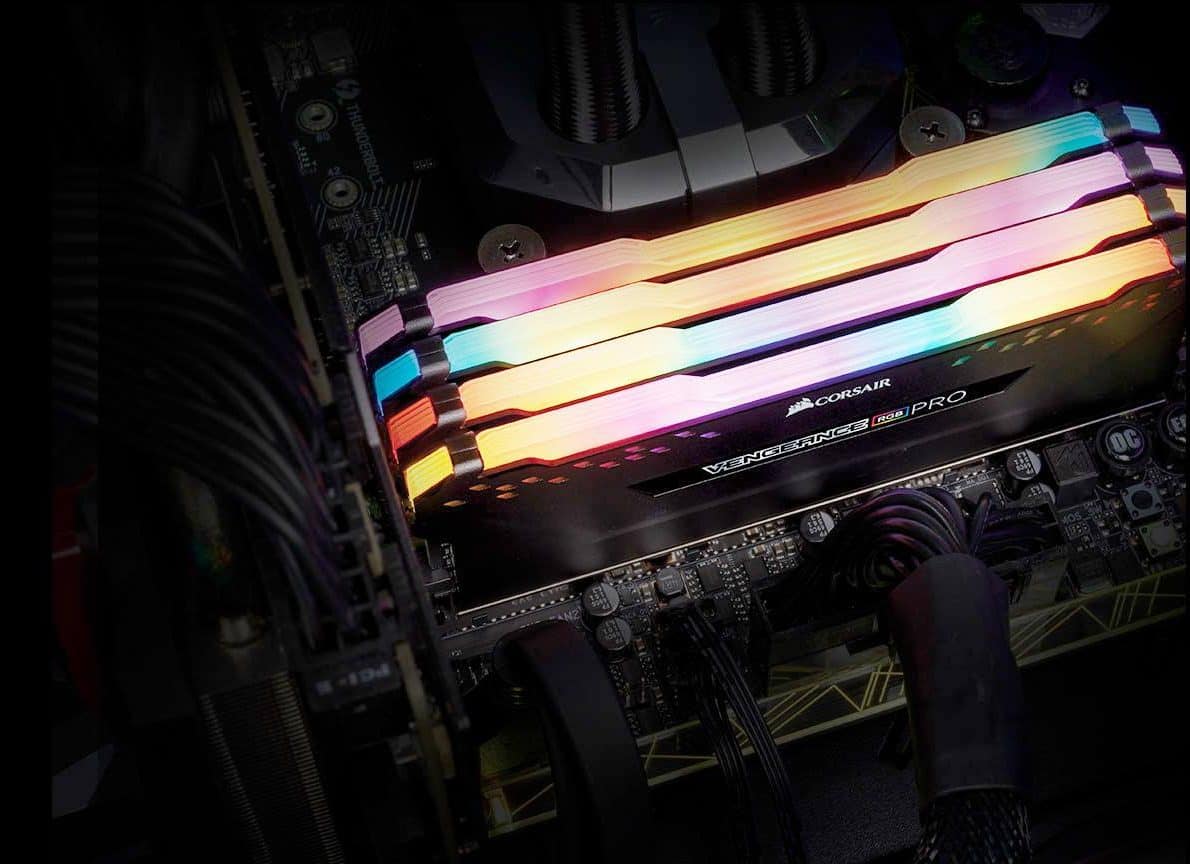 When building a gaming PC, understanding all the components and how they’ll affect your computer’s performance in videogames is essential. One of those key components is RAM. DDR4 RAM is faster than any other previous RAM technology, and it has a bearing on your PC’s gaming performance. How much bearing it has though is difficult to determine without in-depth knowledge of the most important functions of your DDR4 RAM in the first place.

Things to Consider when Buying a DDR4 RAM for Gaming

RAM is a bit of a confusing topic when it comes to building PCs for videogames. There are a lot of questions asked about RAM there. How much clock speed do you need? How much capacity do you need? What is up with the timing jargon?

We’ll answer all these questions for you and go over the essentials of DDR4 RAM technology and its importance in video gaming. Think of this as DDR4 RAM 101.

Once you’re done reading through this, be sure to read our reviews of the best DDR4 RAM for Gaming in 2019.

The clock speed of your RAM is perhaps its most important and basic spec. In simplest terms, this is the speed at which the data is fed to your CPU. Clock speeds have greatly increased compared to DDR3 because of the lower voltage DDR4 RAM runs at. Additionally, faster processors can utilize this speed easily, provided your motherboard can handle them.

The motherboard provides channels between your CPU and RAM to transfer data, so it is the limiting factor when it comes to your RAM’s clock speed. You could get 4000MHz DDR4 modules, but they won’t run at that speed if your motherboard doesn’t support it. Think of channels as highways for data to travel between two destinations. The destinations are the CPU and RAM. Larger the highways, the faster the data can transfer from one PC component to another.

For this reason, it’s paramount that you determine what the clock speed limits of your RAM should be based on what motherboard you have. Motherboard manufacturers list the maximum memory clock speeds on their spec sheets, which can easily be found on the product’s website.

But that doesn’t answer how RAM clock speed translates to performance in videogames. The speed of the RAM does give a bump in frame-rates, but the returns greatly diminish after a certain point. This is usually around the 3200MHz mark. Beyond the 3200MHz point, the increase in frame-rates is negligible, and from a value perspective it’s absolutely not worth it. Heck, most videogames would even run adequately at lower RAM speeds of 2666MHz, but a slight bump in performance can be tangibly observed between 2666MHz and 3200MHz, particularly in Ryzen builds (more on that in a bit).

Nevertheless, if you’re looking for fast memory performance that directly translates into improved performance in videogames, the clock speed is important, and even more so with Ryzen CPUs. You just need to make sure your motherboard can handle those high speeds.

Clock speed can also be limited if you’re mixing and matching RAM modules of varying speeds. Motherboards are quite intelligent, and they’ll run all RAM modules at the speed of the slowest module for safe and stable operation. This is why most manufacturers pair RAM modules in dual-channel kits so that each RAM module is similar to the other in clock speed, manufacturing, and overall performance.

Latency and timing are where things get very technical, and it’s a bit hard to explain without going too in depth and exploring the intricacies of RAM design and function. RAM timings are written on the label of the RAM and can be identified easily online on the product’s information page. They are usually written in this form: 16-16-16-32.

Those numbers don’t make sense initially, but they tell a lot about the RAM’s performance. These numbers are the measurement of the latency or delays in specific RAM operations in nanoseconds. The lower the numbers, the faster the RAM. The most important number is the first one. In the case of the given example (16-16-16-32), this is 16. This is called the CAS latency and is the number of clock cycles it takes for data requested by the memory controller to become available to a data pin.

Confused? Don’t worry – unless you have a degree in electronics engineering, you probably won’t grasp this jargon and technicality easily. The good thing is you don’t have to. RAM latency and the timing is essential for many processes, and the effect is more apparent in heavy computing tasks such as content creation, rendering, and complex simulations.

For videogames, a “tighter” timing (one with lower numbers) can give a slight improvement, but the extra money you’ll have to pay to get high speed, high capacity, and low latency RAM is not worth the marginal gain. You’ll find better results spending that amount on a faster GPU or even CPU. Additionally, RAM timing can be made tighter by overclocking and increasing the voltage on the RAM. You’ll need a powerful motherboard for that though and some extended knowledge of how to tinker. We just don’t think it’s worth the risks and effort unless it’s your hobby and those extra 1-2 extra frames make a difference.

RAM capacity does have an impact on your gaming performance, but it doesn’t have a major impact on the highest and lowest frame-rates. That sounds almost contradictory, but it’s not. The performance impact comes from jerkiness and more inconsistent frame-rates.

This is because videogames use a combination of graphics memory as well as your system’s RAM. How much of each videogame uses is different for every game, but the general rule is that your graphics card will often handle the most memory-intensive task: rendering high-resolution textures. Majority of the times, the rest of the load will be on your system memory.

The right amount of RAM capacity depends on the games you’re playing. In 2019, the general rule of thumb is to go with 16GB DDR4 RAM when paired with a 6 or 8GB graphics card. However, many games won’t even require that much system RAM. Most companies now recommend 8GB of system memory, but there are a few videogames creeping up that recommend 16GB RAM, especially if you want to play at higher resolutions such as 1080p.

So what’s the short version of how much RAM you need for gaming? We would recommend 16GB of RAM for gaming in modern times. 32GB will be future-proof and is useful if you’ll be doing highly intensive tasks like rendering and video editing on 4K alongside playing videogames, but for pure gaming, 16GB should serve you well.

Using dual-channel RAM is highly popular among all PC builders. You can get a single stick of 16GB DDR4 RAM instead of two sticks of 8GB RAM, but there are a few reasons few go down that route.

Replaceability
The first and most basic reason is replaceability. If you have a single 16GB module which fails, your computer will be rendered useless until you replace the stick. If you have dual-channel 16GB memory (two 8GB sticks) though, one module failing won’t mean you can’t even turn on your PC.

Each memory channel or DIMM slot carries 64-bit of data through it. Putting in a single 16GB stick in one channel will make the entire 16GB of memory accessible to the computer through that single 64-bit channel. However, when you use a dual-channel configuration, the channel width is increased to 2×64-bit, effectively making it 128-bit.

How does that translate into performance in videogames? Not by a lot, since videogames rely more on graphics memory performance. But given the replaceability factor and the vast popularity of memory kits, there’s every reason to prefer dual-channel configurations and get that tiny boost in performance alongside it.

This begs the question: should you go for a quad-channel configuration of RAM for utmost performance? While it’s a good idea, we don’t recommend it unless you’re going for 32GB of DDR4 RAM. Splitting 16GB of RAM into four channels will only trigger the law of diminishing returns, and it will also be more expensive because you’ll be purchasing two extra RAM modules. Furthermore, it completely eliminates the option of increasing your RAM in the future.

Finally, there’s RGB. Yes, it has absolutely zero impact on how well your games run. Yes, it’s purely aesthetical. But it makes people happy, and that’s why it’s so popular. PC building has become an art, and an aesthetically pleasing PC will make you want to use it more.

RAM modules with RGB implementation used to be slower than those without one before, but since the introduction of DDR4 memory, this difference is non-existent. This is because DDR4 RAM runs on lower power than DDR3 RAM, so there is enough headroom to include RGB LEDs while still leaving options for overclocking safely.

RGB RAM adds to the aesthetics and is controllable through dedicated software and sometimes with motherboard software, depending on which motherboard you have and which RAM module you own. All popular RAM manufacturers like Corsair, G.Skill, Patriot Memory, Kingston HyperX etc. offer RAM modules with RGB LEDs in them. Do note though that you’ll have to pay significantly more for RGB DDR4 RAM than you would with identically performing RAM without any LEDs.

Whether you go the RGB route or not will depend on your preferences and wallet. If your budget is tight, we recommend sacrificing aesthetics in at least the RAM department and investing that amount in purchasing a better CPU or GPU instead.

There you have it. It’s all you need to know about DDR4 RAM for gaming. We think it’s clear that RAM isn’t as important as your GPU or CPU when it comes to gaming, but having plenty of it and good speed RAM is still important enough to take your time and research the benefits. It’s especially important for individuals who will also use their PCs for more memory-intensive tasks like rendering and video editing.