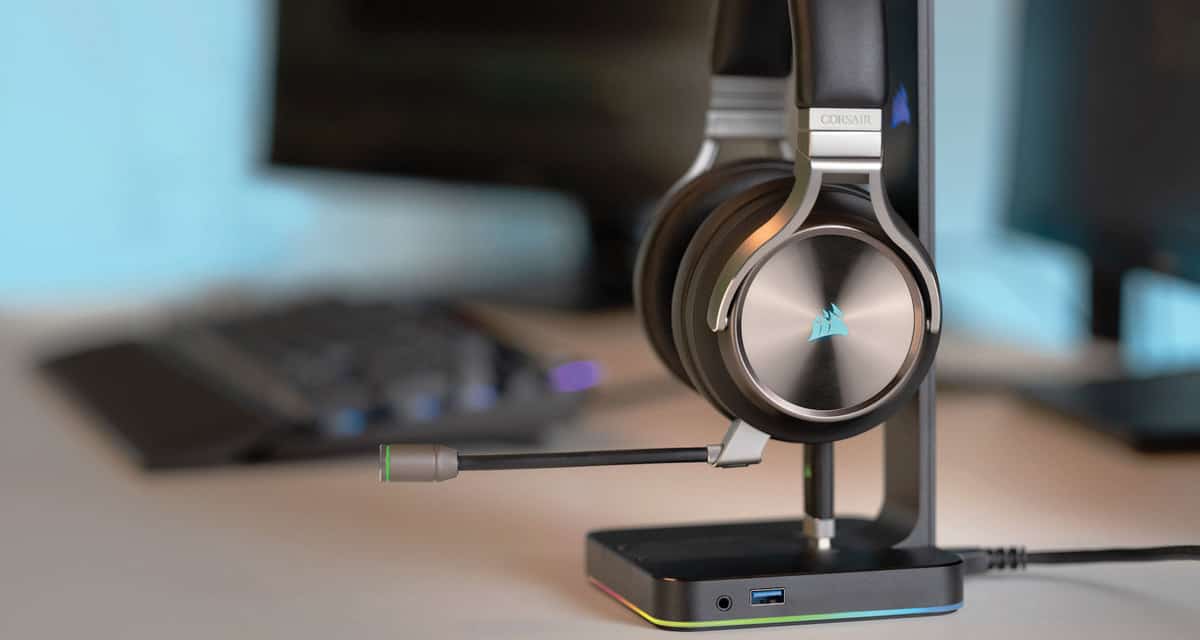 In today’s day and age, wires are slowly disappearing from our lives. Specifically in audio devices, we are getting a much better wireless experience with almost zero latency. For gamers, that is great news, since they will be able to get wires free gaming audio experience. Thus, we compiled a list of the best wireless gaming headset for an untangled sound experience.

Wireless technology has come so far today, you can even wirelessly charge devices. It is a marvel of science that you can charge phones and peripherals without wires. There are so many wireless gaming peripherals in the market today.

We decided to review some wireless headsets today and see how they match up against our standards of wireless gaming. We pitted several wireless headsets against each other according to their prices and these are the ones that came out on top.

But first, a buyer’s guide in case you are interested in buying a wireless headset for gaming.

What to look for in a Wireless Gaming Headset

For instance, you cannot there are distance limitations on wireless devices. If you take it too far away from the source, you will end up disrupting the connection. There is also the limitation of batteries in wireless devices, that they require charging. So always check what kind of battery life do they give on a full charge. Also, check how long does it require for a full charge to begin with.

In games, every millisecond counts, specifically in fast-paced games like FPS shooters. If you hear enemy footsteps even a second too late, you might end up dead. You need to make sure there is almost zero latency when it comes to gaming headsets.

Battery life, distance, and latency are the three most important things when choosing a wireless headset. So make sure to look at these three in advance before you pick up any wireless gaming headset.

One last thing you might need to be careful of is your own comfort. You would not want headsets that start to hurt after a few minutes of you wearing them. Make sure to try on a headset for a while and see if they fit you fine. Most headsets can be adjusted, but there is a limitation to the adjustments as well.

Check if the earcups are cushioned enough and the drivers are away from your ears. See if your ears fit snug inside them and they are not hurting after a while. See if the headband is also comfortable and sits right on your head. 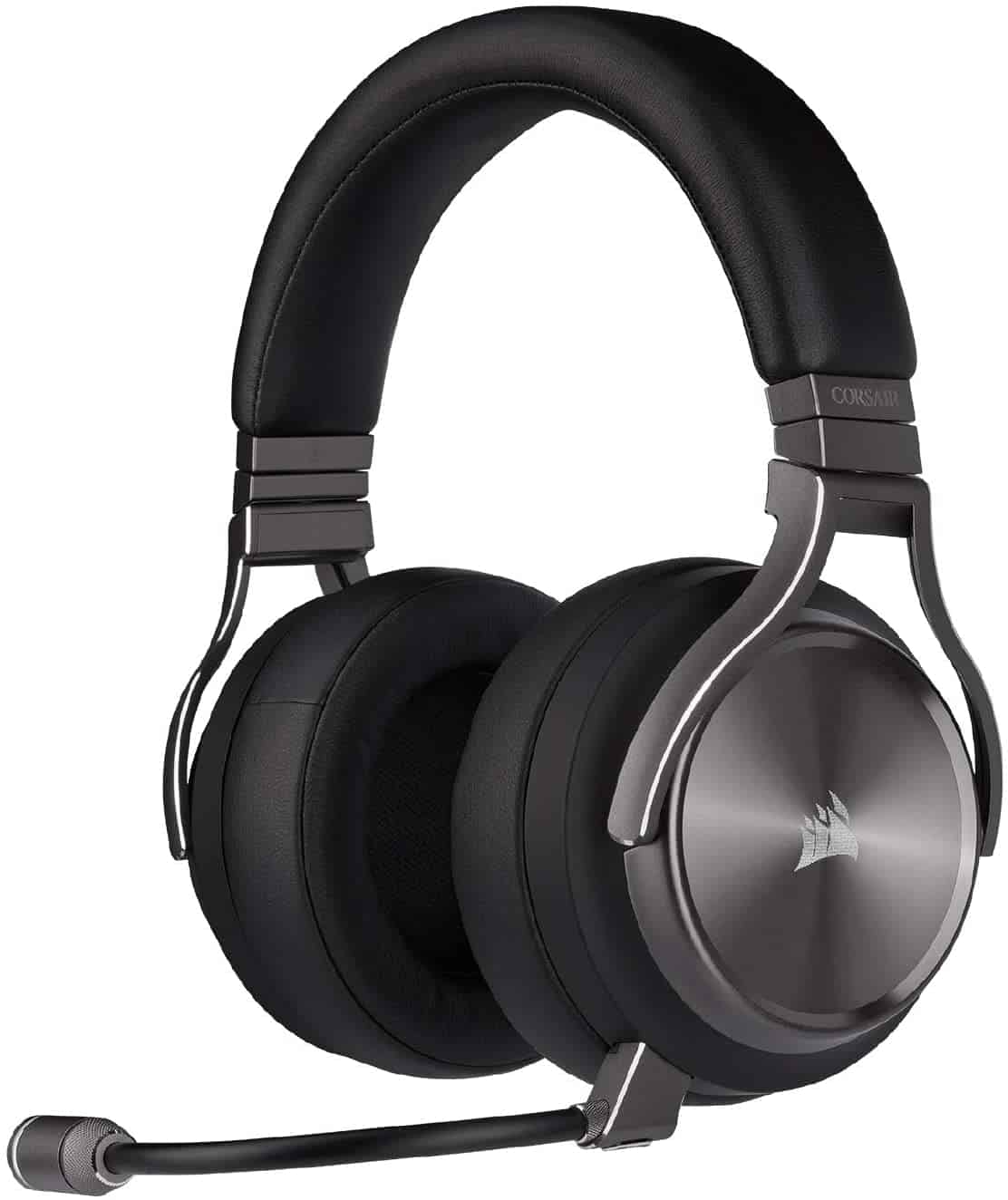 Corsair has some amazing quality when it comes to headsets, even the HS70 is amazing. But the Virtuoso is our newest favorite for two reasons, it is affordable and it has amazing audio.

The Corsair Virtuoso RGB SE has an aluminum body, that gives it amazing durability, so it ticks off our durability testing. The earpieces are also very soft and the cushion is very light, the build quality is solid with swivel ability.

There is a scale on the adjustment bar, which you can pull and retract to fit your head. The scale allows you to know what number suits your head and you can remember it always. It is an old concept used in some other headsets, but a welcome concept always.

The mic is detachable, and the mute button of the mic is on the mic itself under the connector. When you press it a red LED ring around the microphone indicates mic is muted. We really love the RGB on the headset, it is very simple and aesthetic, pleasing to look at.

The mic quality is so amazing, the mic is flexible, so you can place it as you like for the best audio experience. Overall experience using this headset was no less than impressive and amazing.

The only issue we did have was with the wired connection, that is right, this has wired and wireless capabilities. The software used for wired connection, iCUE, requires some work to make the headset a bit better. 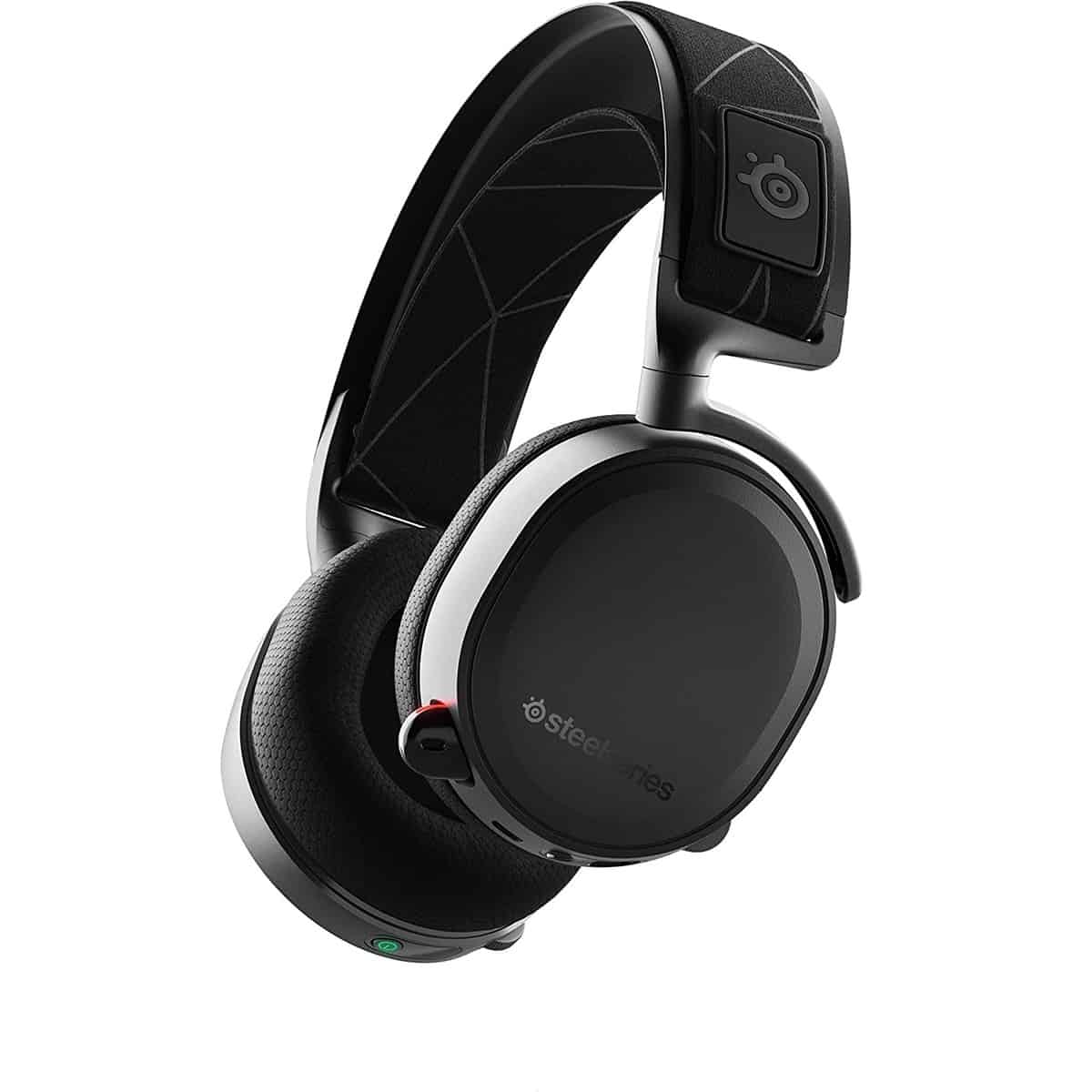 The SteelSeries Arctis 7 has to be one of the best wireless gaming headsets available in the market. These have almost zero latency thanks to the 2.4GHz wireless receiver that comes with the headsets.

SteelSeries Arctis has been a successful series of headsets, with the Arctis 7 as best value. The company does not cut any corners in providing gamers with the utmost gaming experience.

Thanks to the 2.4GHz receiver, which has a range of about 10-12 meters, you get zero interference issues. The headsets are aptly designed with the earpieces big enough to cover your ears. This allows for the earcups to seal off your ears to block off outside noise.

The stretchable headband adjusts according to the wearer, so game on regardless of the size of your head. We really love the retractable microphone, though be warned, retracting does not mute the mic. And an LED indicator on the microphone indicates when the mic is actually muted.

With 24 hours of battery life, the SteelSeries Arctis 7 lets you game on for longer. The surround sound gives you a sense of 360-degrees audio immersion. The earcups are made of breathable material so that they don’t get too warm.

The microphone has active noise-cancellation for clear chat audio, that is why this headset is certified by Discord. For the price of just $149, you get these amazing headsets that will complete your audio experience with their wide range of tones. 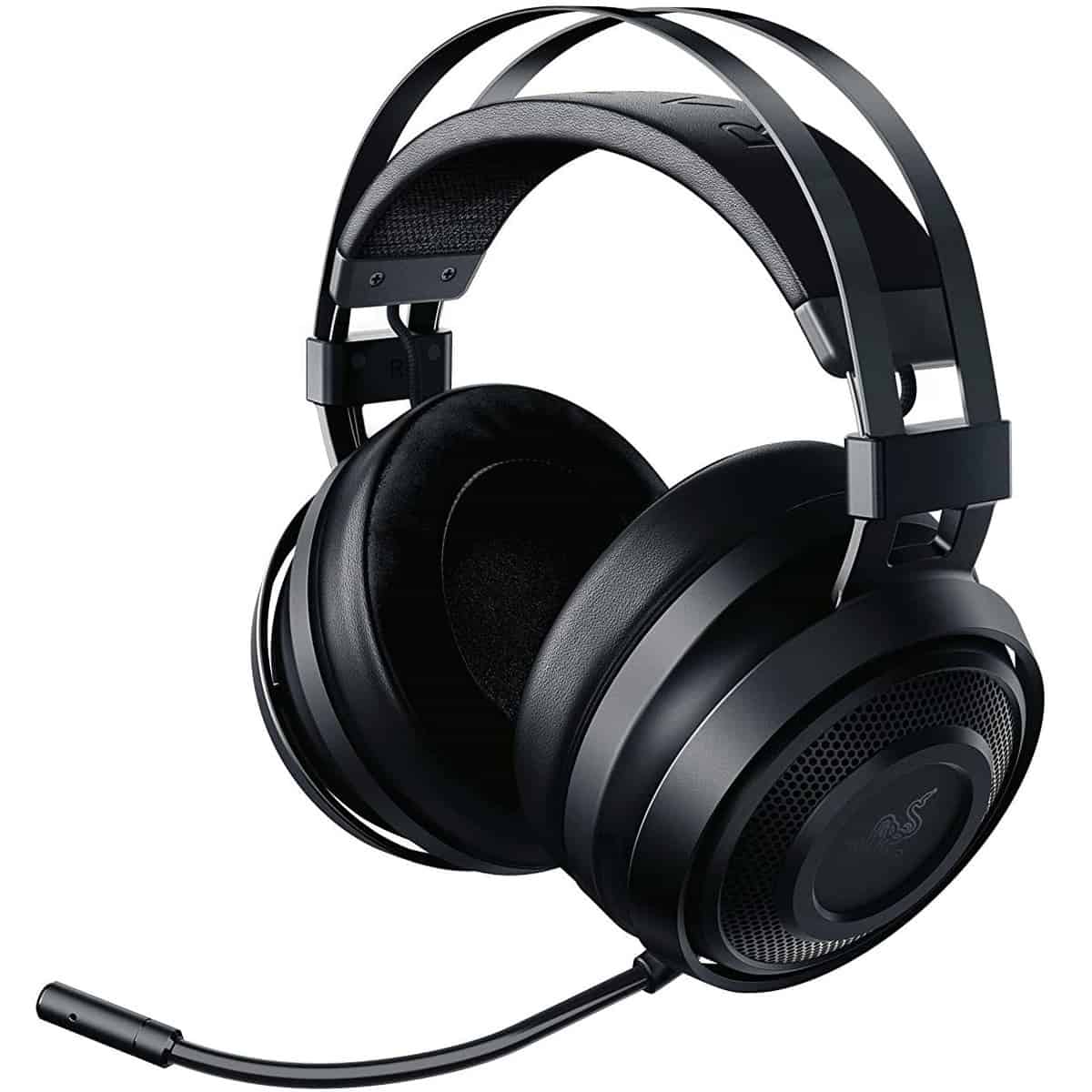 The Nari Essential is basically what it names suggests, just having the essentials of the Nari Wireless headset. But since it only has the essentials it becomes cheaper at the sacrifice of some key features.

The Nari Essential keeps all the essential goodness of the Nari and Nari Ultimate, making it affordable. But it does cast off some key features that would make it a more convenient choice.

Razer has many products in the market for gamers, they are the biggest gaming peripheral manufacturer in the US. Their keyboards, mice, and even their headphones are loved by many gamers for their game savvy quality.

The Nari Essential has a flip mic instead of a retractable one like the Nari and Nari Ultimate. This does kill off some of the greatness of the wireless series of headsets.

Another key feature is that it does not lay flat on your shoulders, the earpieces do not swivel. It barely moves, but the build quality is like the other two expensive options.

The earcups have a cooling gel in the foam for keeping your ears cool but don’t expect miracles. The foam does feel warm after a few hours of wear like any other headset does. It also has a space for glasses that makes it comfortable for the glasses-wearing audience.

Lastly, it has THX Spatial Audio support for the best audio experience, you can really feel the difference in these headsets from normal surround sound ones.

Razer is not a cheap brand, but these headphones are very reasonably priced at around $90 on Amazon and BestBuy. 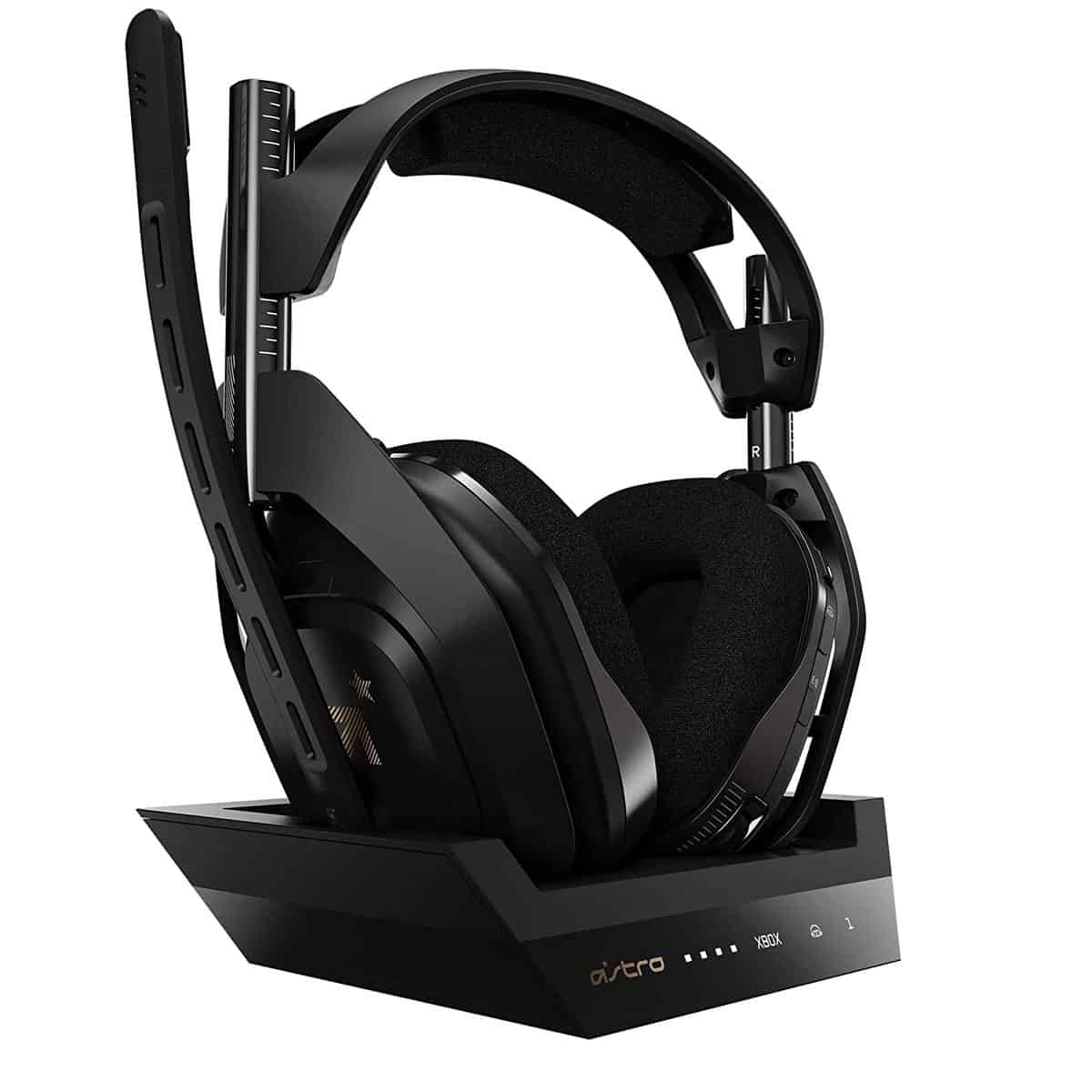 Now we know we are cheating a little bit, but hear us out. The Astro Gaming A50 Wireless with its base station is the ultimate combination for console gaming when it comes to headsets.

These headsets come with the base, which is also a charging dock for the headsets. If you want to make a quick switch of consoles just buy the base for the other console.

While the Astro A40 TR is the more preferred headset for gaming audio, the a50’s wireless appeal does not die out. The base station, which is also what acts as the wireless adapter between the console and headset is also its charger.

The headpiece is also removable, it can also be changed along with the earpieces. The whole headset is really comfortable, it looks big but is remarkably light.

It also has great movement, the size can be adjusted according to your head and it also has a swivel. We found that the dock charges the headset super fast.

The dock of your choice, in our case, Xbox One version, shows the battery life of the headset. You can place your headsets on the dock for a quick charge.

The headsets have a remarkable battery life of 15+ hours. In our continuous tests, it lasted for about 16 hours on a full charge.

The mic arm can be lifted up to mute it, there is an audible click you hear when it mutes. The mic quality could be better, it is clear but quite bassy.

However, the bass on the headset itself needs some work, compared to the a40 TR by Astro, the bass isn’t quite well. We could use some more bass on these headsets, but some sacrifices were made for these and it was the bass in this case.

Lastly, these are very expensive, to make these work on a PS4 you will need another base station. This can set you back even further, but both the base stations can work with a PC so that is a win.