Best Touchscreen Laptops You Can Buy in 2021 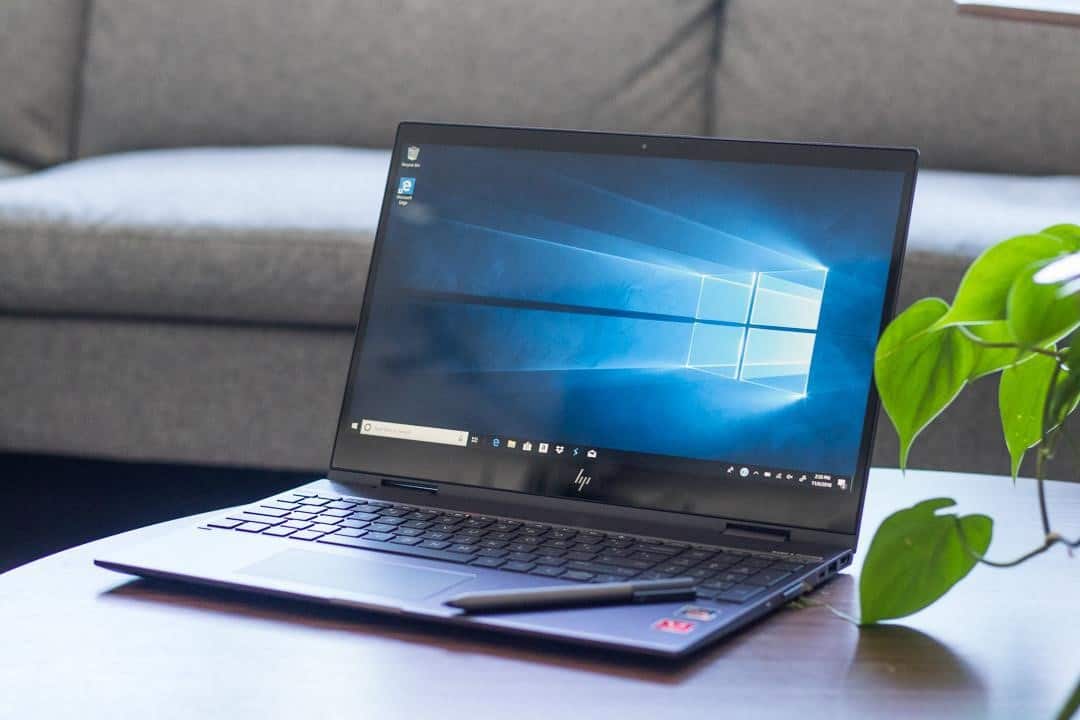 Are you a designer or digital artist who works on a graphics tablet and wants to switch to touchscreen laptops? With graphics tablets, the most you have to look for is good pressure sensitivity. But when it comes to these laptops, its basically an all in one solution. The best ones have great specs and can support the best editing software available.

A touchscreen laptop is a great way for you to release all that pent-in creativity. Usually, you get HD displays in high-end graphics tablets, but these are full-fledged systems. Meaning you will not need anything else other than maybe a compatible pen or stylus.

Most graphics-intensive tasks require a good GPU and most of the laptops on our list have it, with one exception. So these laptops can be a tad bit expensive, but we have included a budget laptop with good performance as well.

It will mostly depend on your budget in the end, but you can definitely expect great results from these.

So when it comes to touchscreen laptops, there are mostly a few things to look at. You need a touchscreen that is pressure-sensitive so you can draw on it. You need a good processor to power up that touchscreen without hitches. This allows you to use graphical intensive apps without any issues.

Of course, if you need some really good graphics performance, you will need a GPU as well. Even if you do not have a GPU, you can still work on photoshop and do digital art. That is if the touchscreen has a good pressure-sensitive surface.

Not having a GPU does not render a touchscreen laptop useless. However, it does make it slower than usual when performing graphic-intensive tasks. Usually, things like 3D rendering, animation, and such require some semblance of GPU power. It also requires a good CPU as well with hyperthreading.

Best Touchscreen Laptops Reviewed According to Price and Performance

Here, we have compiled a list of the best of the touchscreen laptops that you can buy. They vary in price and specs, but all of them have an excellent touchscreen display. So if you are interested in either of them, just give their specs and pricing a look. 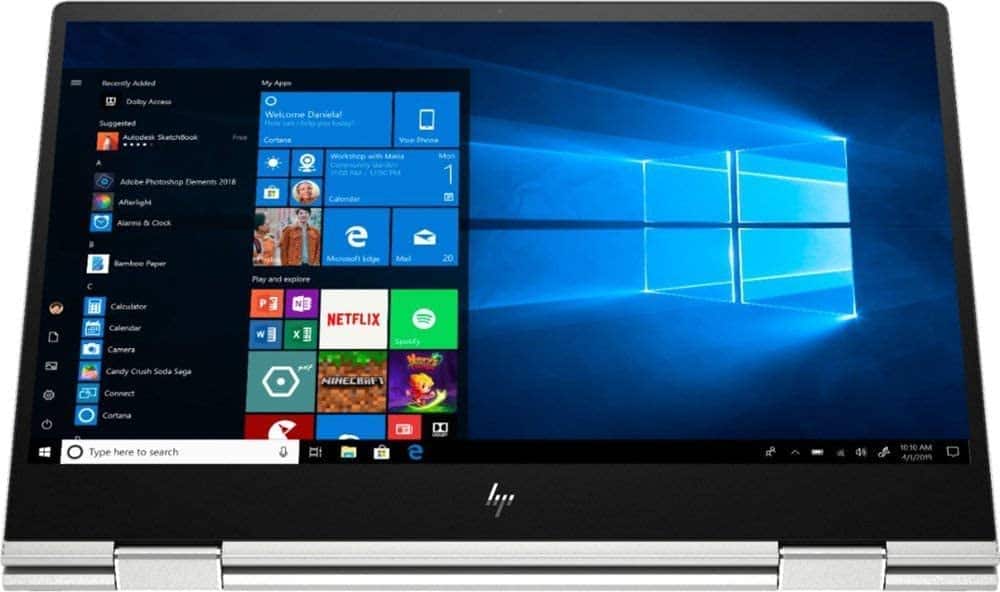 The HP Envy x360 has been a long-favored touchscreen laptop for designers and artists alike. The laptop comes with some great specs to it making it a really desirable piece of equipment.

Check Price on Amazon
With an FHD touchscreen display, a decent GPU that can run some graphics-intensive software, the HP Envy x360 comes at a reasonable price. Performance-wise, it is a great deal, you get some great specs on this thing.

The laptop comes with a 15.6″ screen, which has 4K 3840 x 2160 resolution AMOLED display. The touchscreen itself works superbly with great responsiveness. The display is an edge to edge on this laptop.

When it comes to hardware, it has an Intel 10th Generation Core-i7 10510U CPU. The base speed on the processor is 1.80GHz which can go up to 4.90GHz on a turbo boost. This makes this machine quite competent with the CPU alone.

But that is not all, it packs an NVIDIA MX250, a 4GB DDR5 mobile GPU used for editing tasks. You can even play light games on this GPU, you will get above 60FPS on games like Counter-Strike: Global Offensive. Might even run Fortnite on 45-60FPS at medium settings as well.

You get 512GB Solid State Storage giving you some lightning-fast reads and writes. It comes with a minimum of 512GB capacity but for more money, you can expand it up to 2TB. You can get up to 64GB of memory, but the base model has around 8GB RAM, great for multitasking. 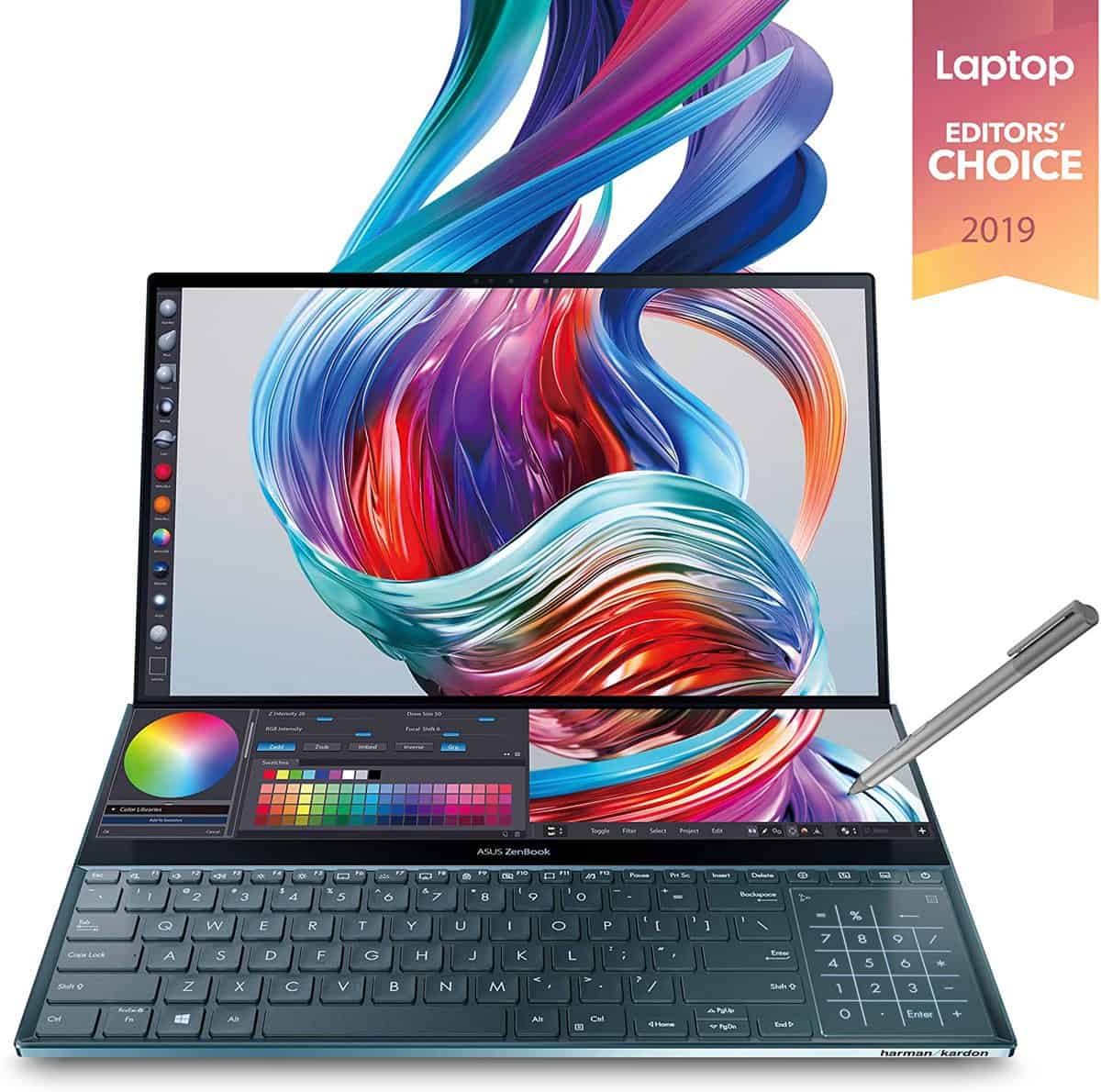 The Asus ZenBook Pro Duo has two screens to work on, both of them are touchscreens. The extra screen above the keyboard is an Innovative Screenpad Plus which helps you in your editing tasks even further.

Check Price on Amazon
Who says money cannot buy happiness? For an editor, it sure will when he can buy this laptop. It comes with a Core-i7 9750H and an Nvidia RTX 2060, use the power of ray-tracing for your rendering tasks

We do not need to tell you how powerful the RTX series of cards by NVIDIA is, with the 3000 series on the horizon, the 2000 series released previously is still an exceptional card. The RTX 2060 might not have as many ray-tracing cores as the models that supersede it, it can still give you an advantage. And this laptop has it!

An Intel Core-i7 9750, which is a 6-core and 12-thread CPU makes this laptop extremely fast. It pairs greatly with the RTX 2060, giving you a high-end performance.

You could game on this thing as smoothly as you would on a gaming PC, but this is a laptop, giving you more portability. You will get some decent FPS counts on AAA titles on high settings with ease.

The Innovative Screenpad gives you really easy access to shortcuts for editing. You can use this secondary screen just like the primary one, it’s like the whole thing is one screen. The primary screen is a 15.6 inch 4K UHD NanoEdge touchscreen, what more do you want?

But all of this comes at a cost, you will have to pay around $2400 to be able to get this laptop. Yikes! But if you got your hands on this thing, we doubt you will need to upgrade for a good while. 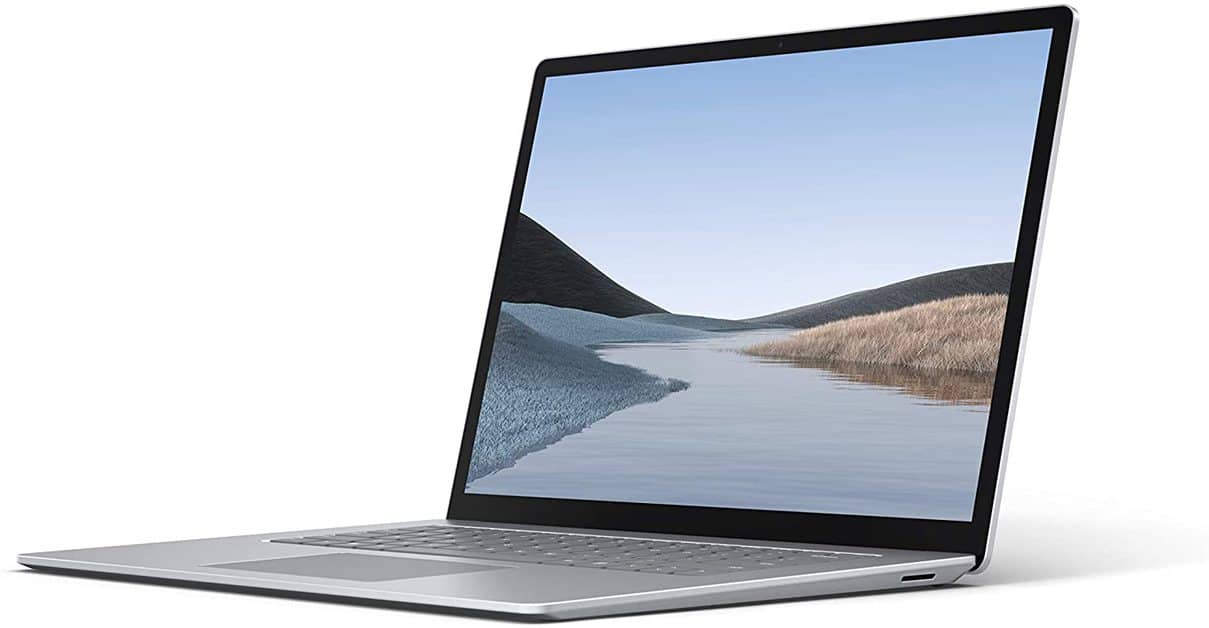 Check Price on Amazon
We took a shot at both laptops, of course, Intel has AMD beat on many occasions. But we wanted to do something different and review this custom Ryzen CPU, which is Surface edition.

Long have we been playing the game on Team Blue’s side, but when you get the option to switch, should you? Well, Surface Laptop 3 by Microsoft gives you this option. This touchscreen laptop features an AMD Ryzen 5 and 7 Surface edition with integrated Vega Graphics.

The Vega Graphics are not as extreme as a dedicated GPU, but it is better than the Intel UHD Graphics. Of course, the same can be said for Intel Iris Graphics in the Intel 10th Generation i5 and i7, as it is a huge boost.

The Surface Laptop 3 works best with the Surface Pen, which unfortunately you might need to buy separately. Also, it does not have a place to insert or store the pen on the laptop itself, which is sad, as you might easily lose it.

The Surface Laptop 3 has got major backlash from critics around the world for lacking a Thunderbolt port. Because it is high time it had one, but for whatever reason, it doesn’t. The Ryzen 5 CPU we reviewed, has a base clock speed of 2.1GHz with a max turbo frequency of 3.7GHz.

The touch screen responds well to the Surface Pen, you can adjust pressure sensitivity with the built-in software. The body is made out of durable but light aluminum metal, has a sleek and light design. 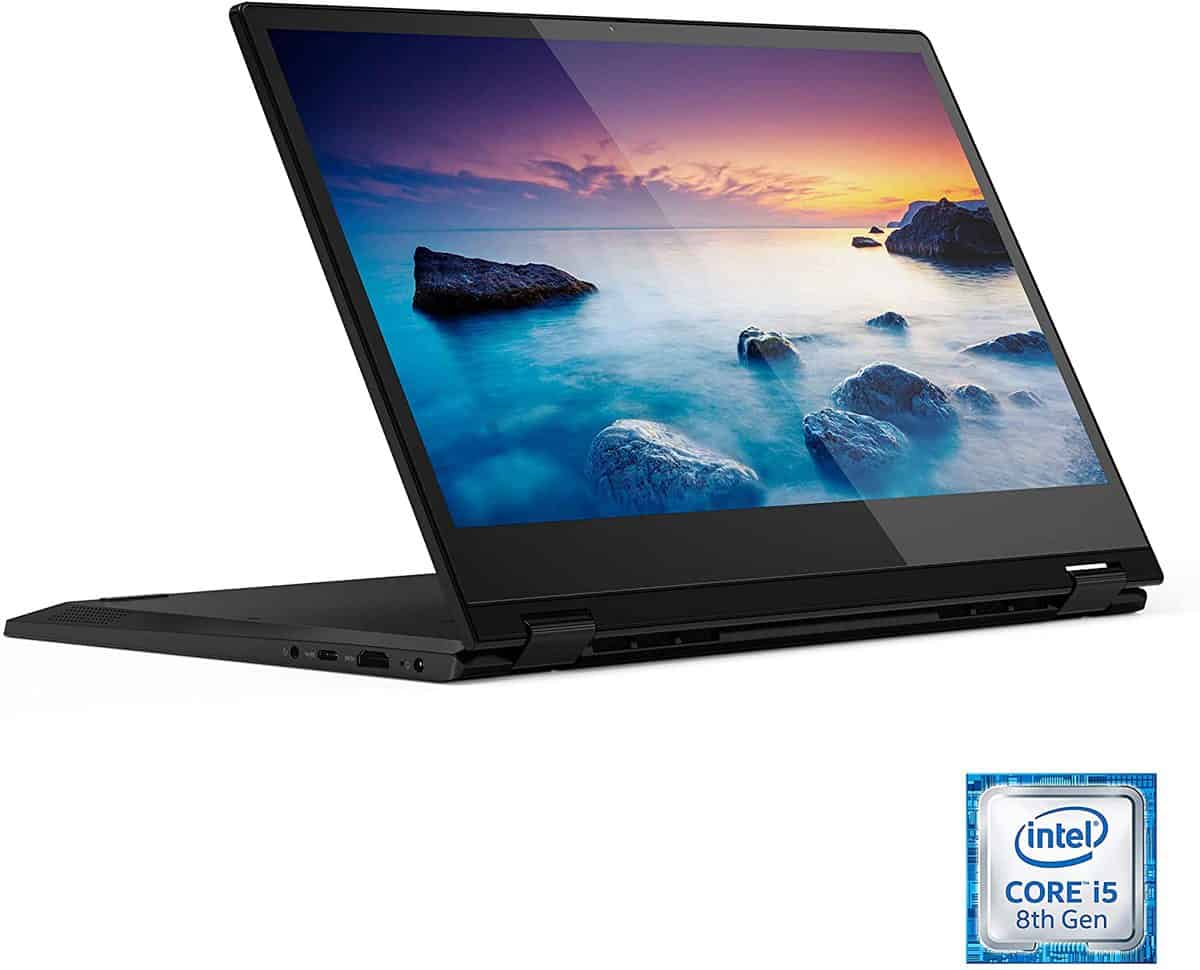 The Lenovo Flex 14 2-in-1 convertible is one of the best touch screen laptops on a budget. You not only get great performance, but you also have pressure-sensitive touchscreen functionality.

Check Price on Amazon
Lenovo Flex 14 is very affordable considering its specs. You can even go for a Ryzen build in the newer models of the laptop, as it even includes the active pen.

This 2-in-1 laptop by Lenovo is ideal for medium to light workloads. Although it does not have a GPU like our other picks, it still a solid touchscreen laptop. However, it will not be able to handle heavy graphical workloads.

You should also not expect to be able to play AAA titles on this laptop with high graphics. With 4GB DDR4 RAM and 128GB SSD on Amazon, you can expect faster boot-up times.

The Intel Core i3-8145U Processor is a 2.10GHz CPU with 2-cores and 4-threads that help in multitasking. If you have a little more you can upgrade your SSD and RAM to even further improve your performance.

Lastly, the design of this laptop is great, it has very narrow bezels on the sides. The screen also feels great, 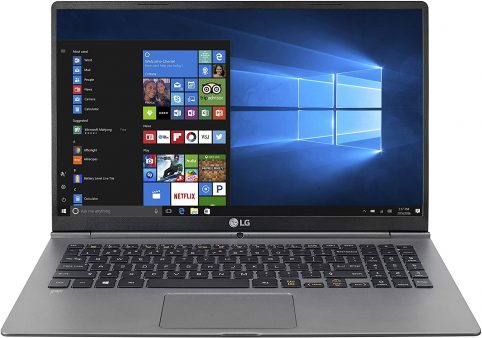 Right off the bat, the LG Gram 15 has a fantastic design. It’s slim and sleek and along with its minimalistic look and shiny silver finish, gives the laptop a very graceful and clean look. For a 15-inch laptop, it is extremely lightweight at just 2.4 lbs, making it extremely portable.

The solid metal body build makes it compact and gives a decent enough feel. It features a full HD display that brings colors to life and gives great detail. As far as the performance is concerned, the LG Gram 15 features the 8th Gen Intel Core i7 along with the Intel UHD 620 graphics processor giving it ample performance capabilities. The 16 GB of DDR4 RAM and 1 TB SSD storage provide speedy functionality and sufficient storage space for your data.

That’s not all; the LG Gram 15 also has additional features that make it even more impressive. It has a fingerprint sensor for added security. The backlit keyboard lets you keep going even in low-light environments. It has all the necessary ports for various connectivity and accessibility. The 72Wh Li-ion battery gives a whopping 16-hour battery life on a single charge.

The LG Gram 15 is much more than looks. With so much to offer in terms of performance, accessibility, portability, versatility, and battery, the LG Gram 15 makes it to the list of the best touchscreen laptops on the market.