Thunderbolt 3 docks are excellent products that greatly extend the connectivity and usefulness of your laptop to give you the functionality of full-fledged desktop computers. They come in usually compact forms that can rest on your desktop and provide a wide array of different ports to connect your display devices, external drives, USB ports, and much more.

Thunderbolt docks aren’t cheap, so you’ll have to be considerate about which one you spend your hard-earned money on. We’ve carefully gone through a wide set of Thunderbolt 3 docks available in the market right now and handpicked the 5 best ones out there.

To understand what Thunderbolt 3 technology is and what you should look for in a Thunderbolt 3 dock, be sure to read our buyer’s guide after the reviews. 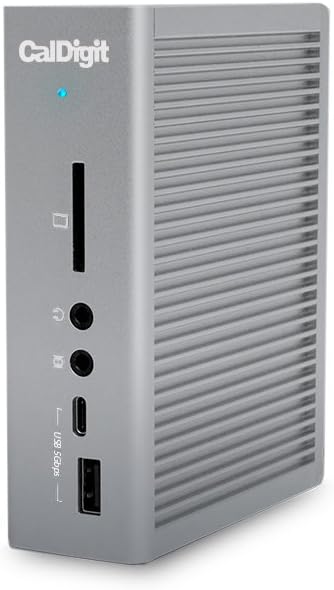 The CalDigit TS3 Plus is more expensive than most Thunderbolt 3 docks, but the additional price is well worth it as it gives you lots of ports and connectivity options in a compact form.

The CalDigit TS3 is small, compact, and has a useful array of connections at great speeds that make it the best overall Thunderbolt 3 dock out there.

You also get power delivery of 85 watts to charge just about any laptop and can run up to two displays at 4K and 60Hz.

The CalDigit TS3 Plus boasts all these brilliant ports in a compact shape that can be placed either horizontally or vertically. It’s not the outright fastest and works best with specific connected hardware, but it’s the best overall package and worth the extra money you’d pay for it over the competition. 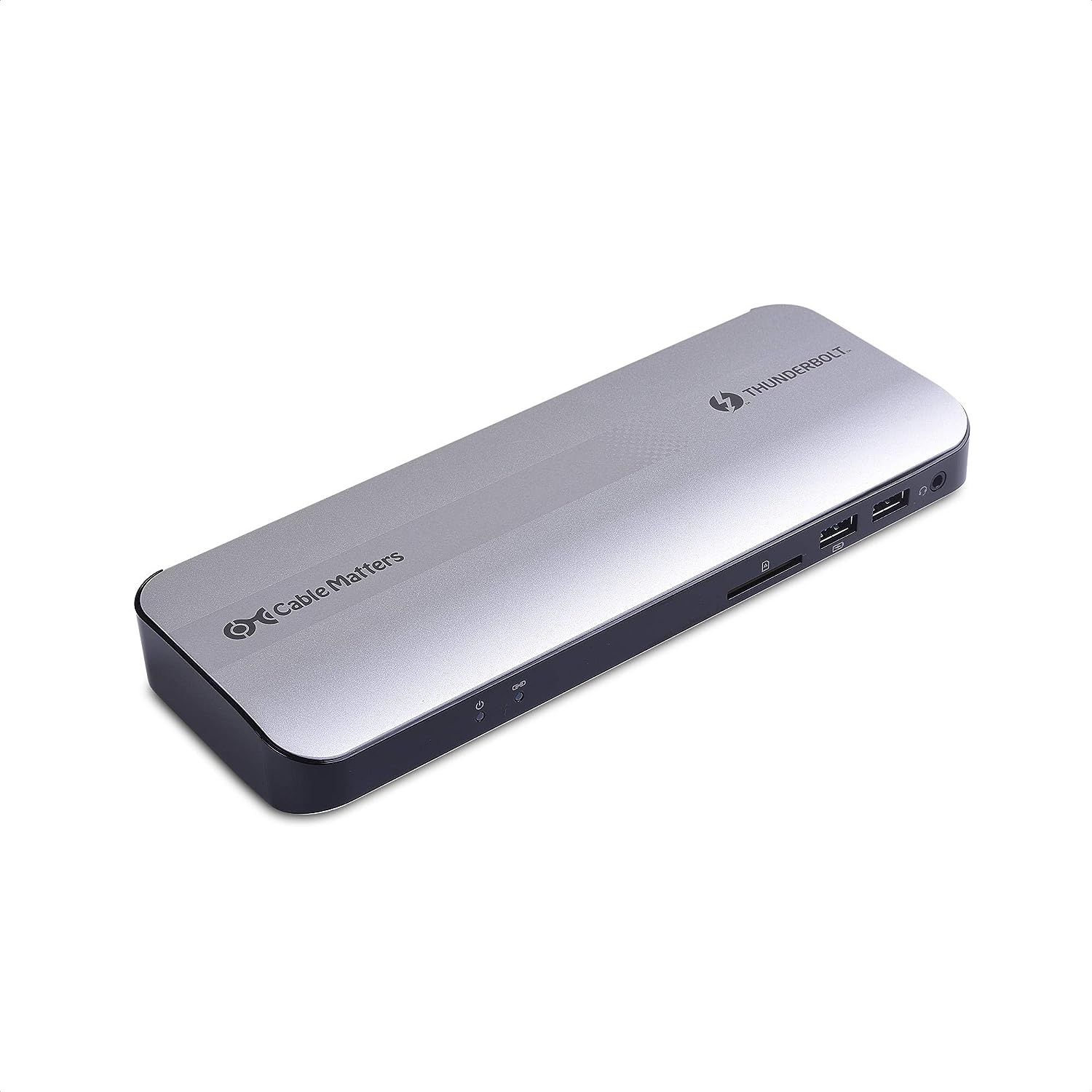 The Cable Matters Thunderbolt 3 dock offers some of the fastest read/write speeds out there, but it comes second to the CalDigit TS3 Plus because it doesn’t have as many ports and is fairly large.

If speed matters to you, the Cable Matters Thunderbolt 3 dock is one of the fastest ones around.

In many ways, the Cable Matters Thunderbolt 3 dock is faster in overall read/write speeds across its USB-A and Type-C ports when compared to the CalDigit 3. However, it doesn’t feature nearly as many ports as our top pick, which is why we consider it a close second.

The Cable Matters Thunderbolt 3 dock features two Thunderbolt 3 ports, five USB-A 3.0 ports, one HDMI port, one Gigabit Ethernet port, an SD card reader, and a headset/mic combo audio jack. You don’t get any pure USB Type-C ports with this dock, and the maximum power delivery is limited to 60 watts. 60 watts is fine for most laptops but can’t charge laptops like the 15-inch Apple MacBook Pro.

With the Cable Matters Thunderbolt 3, you can run two displays at 4K and 60Hz thanks to the second Thunderbolt 3 port that has display delivery with an active USB-C cable.

The Cable Matters dock design is rather lengthy, so it will take up some space on your desk. Though slim, it can’t be placed vertically and the ports are spread horizontally. Yet the Cable Matters dock offers perhaps the fastest performance out of all Thunderbolt 3 docks, making it an excellent choice for speed chasers.

Belkin Thunderbolt 3 Dock Pro works great with both MacBook and Windows-based laptops. With plenty of connectivity options, you will just need this dock to have a clean setup for your workstation.

You only get 1 DisplayPort so if you want a dual monitor setup, you will need the other monitor to support Thunderbolt 3 or daisy chain the monitors together. The upside is that it supports both the monitors with 4K resolution though. It also has 1 Ethernet port for internet connectivity and 4 USB-A 3.0 ports for connecting all your other peripherals like mouse keyboard etc.

It comes with a 170W power brick to power the dock, however, it has an 85W power output to keep your laptop charged while you work on it. The power output of 85W is great, it works perfectly fine with most work laptops that have ThunderBolt 3 regardless if they have a GPU or not.

The design is sleek, due to not having a built-in power supply, it does not take a lot of space, all the connectivity options are great, however, it is a crazy expensive dock and you can find plenty alternatives for the same price. Even though we were trying to avoid any brand type docks, but this one was worth mentioning. The 2nd Generation of HP Thunderbolt Dock aptly named HP Thunderbolt Dock 120W G2 has a special feature that we could not find in any other dock, a speaker and a mic along with call buttons for Skype calls.

This unique feature makes the Dock a bit more valuable in my eyes because the added speaker feature is great, it has decent sound so it can be used for music as well.

It supports dual 4k Resolution display through 2 DisplayPorts and a USB-C type port with power output. It has plenty of connectivity options, the best part is that it has a 100W power output on the USB-C Type port, so you can even charge the most power hungriest laptops on this dock.

You have plenty of USB 3.0 ports for connecting your peripherals, an Ethernet port for internet connection and even a VGA port if you find yourself with a monitor that does not support either USB Type C or DisplayPort option.

The highlight of this dock the audio module on top is a great addition for conference calls. The shortcut buttons for calls is a welcome addition, the speaker has great sound quality. So even if you want to have a conference call and cannot find a display or sound option, just go with the dock and you will be fine. The StarTech Dock we’ve featured is a powerhouse. It’s a fairly large dock that is built like a tank and has plenty of ports in it.

With this dock, you get six USB 3.0 ports including a fast-charging port for mobile devices. Additionally, there’s a single USB Type-C port up front, Gigabit Ethernet port, two Thunderbolt 3 ports, a DisplayPort, an SD card reader, and a combo audio jack.

Like the CalDigit TS3, this is one of the few Thunderbolt 3 docks that have power delivery that can reach up to 85 watts, essentially capable of quickly charging just about any modern laptop out there. The DisplayPort can be combined with the Thunderbolt 3 to run up to two displays at once at 4K and 60Hz, or you can use a single port to run a display at 5K as well.

Speeds of the StarTech Dock are average, on par with the likes of Plugable and Promise Technology. We love the addition of a regular USB Type C 3.0 port as well on this port, allowing you to fully utilize the Thunderbolt 3s and simultaneously run other Type-C peripherals with it.

The design is bulky though, but this StarTech Thunderbolt 3 dock is designed to withstand the abuse, even though it’ll likely never move off your table.

USB 3.1 and Thunderbolt 3 look confusingly similar but offer a lot more than the other. USB Type-C currently has two standards: Gen1 and Gen2. The main difference between the two is transfer speeds, with Gen2 capable of double the transfer speed as Gen1 (10Gbps). Additionally, Gen2 offers 20 volts of power delivery, so it can be used to connect external drives and charge devices.

Thunderbolt 3 offers all that and more. Thunderbolt 3 is even faster than Gen2, offering speeds at a whopping 40Gbps. Moreover, 100 watts power delivery is combined with the ability to support 4K 60Hz displays, four lanes of PCI Express Gen3, eight lanes of DisplayPort 1.2, and daisy-chaining of up to six devices at a single time.

This makes Thunderbolt 3 not only faster than USB 3.1 connections, but also one port to rule them all. Thunderbolt 3 is still at its infancy in use compared to other USB types, but it’s expected that it will ultimately replace the majority of the ports out there.

More and more laptops are coming with Thunderbolt 3 ports in them, and this has given rise to powerful Thunderbolt 3 docks that can greatly extend the functionality of these laptops.

If you’re looking to extend the functionality of your laptop and run multiple displays through it – whether occasionally or all the time – it’s paramount that you consider Thunderbolt 3 docks with that capability.

Transfer speeds will vary with the type of connection. USB 2.0 is obsolete thanks to the backward compatibility of the faster USB 3.0, which is why you’ll almost always see USB 3.0 ports in all Thunderbolt 3 docks.

Interestingly enough, USB 3.0 is often the slowest port featured on a dock. The fastest are Thunderbolt 3 ports, and a few docks feature regular USB Type-C Gen1 or Gen2 ports in addition as well which sit in the middle of the road.

While you can connect Type-C peripherals to your Thunderbolt 3 port, having multiple ones allows for more versatility. You can then utilize the full potential of the additional Thunderbolt 3 ports for added connectivity and use the USB 3.0 and Type-C ports data transfer and connecting other peripherals.

Power delivery is also done through Thunderbolt ports and is often limited to 60 watts or 85 watts. 60 watts should be enough to power most laptops, but certain laptops like the Dell XPS 13 and 15-inch MacBook Pro utilize higher wattage for charging.

Why do I need a Thunderbolt 3 dock?
A Thunderbolt 3 dock expands the functionality of your laptops. As laptops become thinner, the number of viable ports decreases. Many manufacturers are now utilizing the slimmer Type-C port form factor and offering Thunderbolt 3 technology on them. This not only provides immense transfer speeds but also gives the user to expand the functionality of the laptop through a dock which can provide additional connections that are not available on the laptop.

Can I charge more demanding laptops with 65 watts, such as the 15-inch Apple MacBook Pro?
Yes, you can, but the charging time would greatly increase, and frequently charging at a lower wattage could potentially damage the battery life over a long time.

What is daisy chaining?
Daisy chaining is when multiple devices are connected in a sequence through a single connection. This configuration is governed by the priority of the devices. It is essentially the computer equivalent of a series electrical circuit.