Best Thermal Pastes for Overclocking in 2021 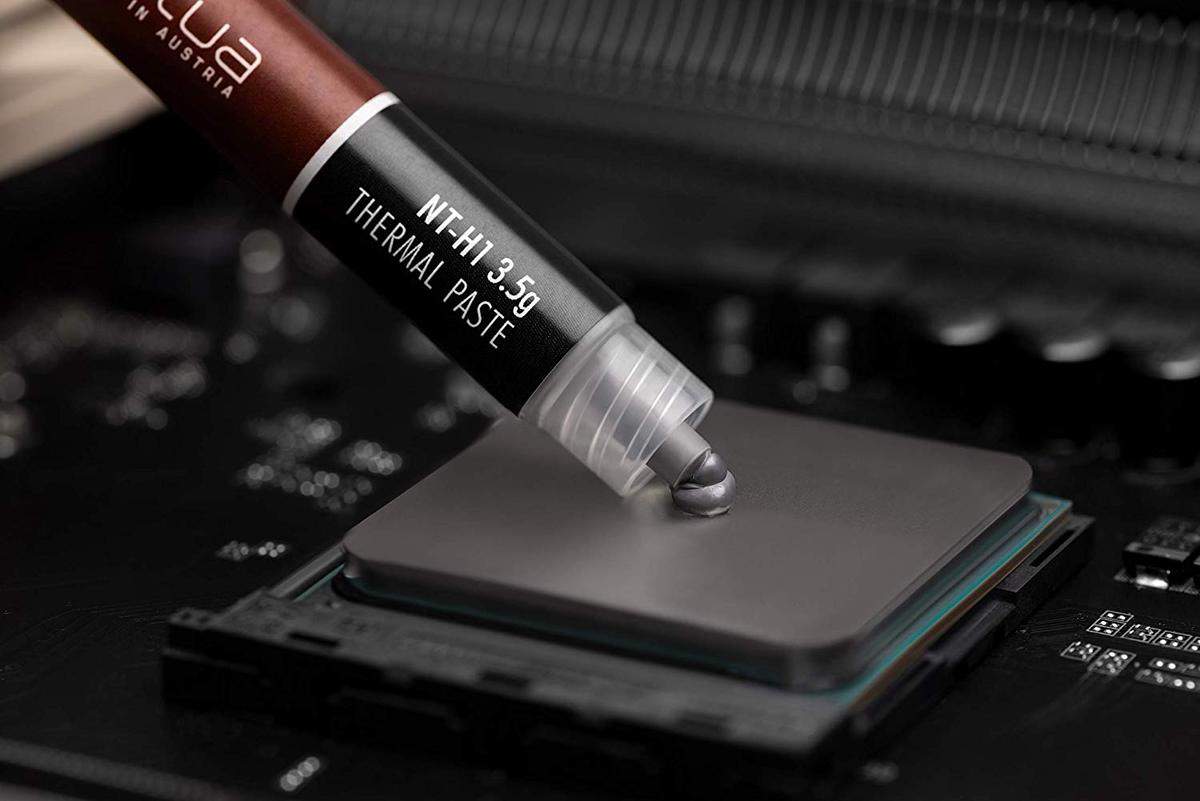 While it’s true that the cooler (both type and model) you use for your CPU or GPU is the biggest factor in keeping your components cool, thermal paste for overclocking makes a significant difference as well. In fact, a bad thermal paste can mean the heat is not conducted from the processor to the heat sink of your cooler efficiently. This can greatly reduce how much you can overclock the processor without running into heat and stability issues.

The entire purpose of thermal paste is to act as a thermal bridge between your CPU and cooler. Its job is to make sure it takes as much heat as possible from the CPU’s surface and transfers it as efficiently as possible to the cooler’s heatsink to be removed from the system. Therefore, you could have the world’s best cooling solution, but it will still not perform up to mark if the thermal compound between it and the processor is poor.

We’ve reviewed what are in our opinion currently the 5 best thermal pastes available specifically for overclocking. Whether you’re looking to break barriers with your numbers or just looking for a slight overclock, you’ll find the product you need in this article. 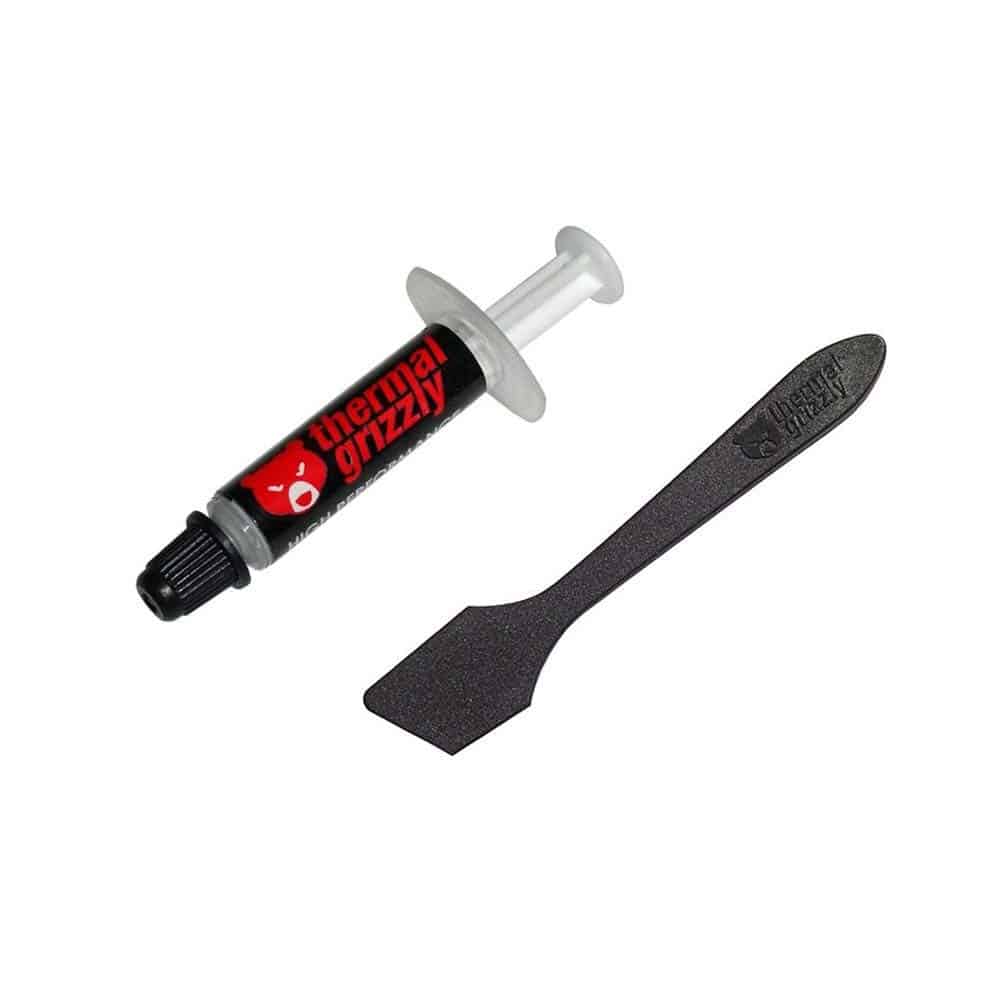 The Thermal Grizzly Kryonaut is a ceramic thermal paste with zero conductive power. There is no settling time requirement and is designed to lower the temperature of your CPU or GPU considerably over the standard thermal paste.

The Thermal Grizzly Kryonaut isn’t the cheapest paste, but thanks to its long life, ease of appliance, and excellent thermal conductivity, it is the best overall thermal paste for overclocking for most high-end users.

For overclocked systems, you want a non-conductive (electrically), high-quality thermal paste that you can use once and then forget about for several years. The ceramic-based Thermal Grizzly Kryonaut is exactly that, a simple and effective solution to thermal requirements. It’s designed to provide three to four degrees lower temperatures than the Noctua NT-H1 and the popular Arctic Silver 5 thermal compounds that are so popular.

The one downside that puts many users off is the pricing though, as this thermal paste can cost twice as much as you’d get the Noctua NT-H1 for. However, if you’re overclocking your CPU and/or GPU to extreme limits, you want a thermal paste like the Grizzly Kryonaut at your disposal.

The Thermal Grizzly Kroynaut is non-capacitive and has a thermal conductivity of 12.5W/mK, making it the most thermally conductive ceramic paste with zero electrical conductivity. It requires no settling time, so you can apply it and then slap on a cooler. The 1 g of paste is rather conservative, but a single tube should provide more than enough compound for 3-4 applications at the very least, provided the correct amount is used. 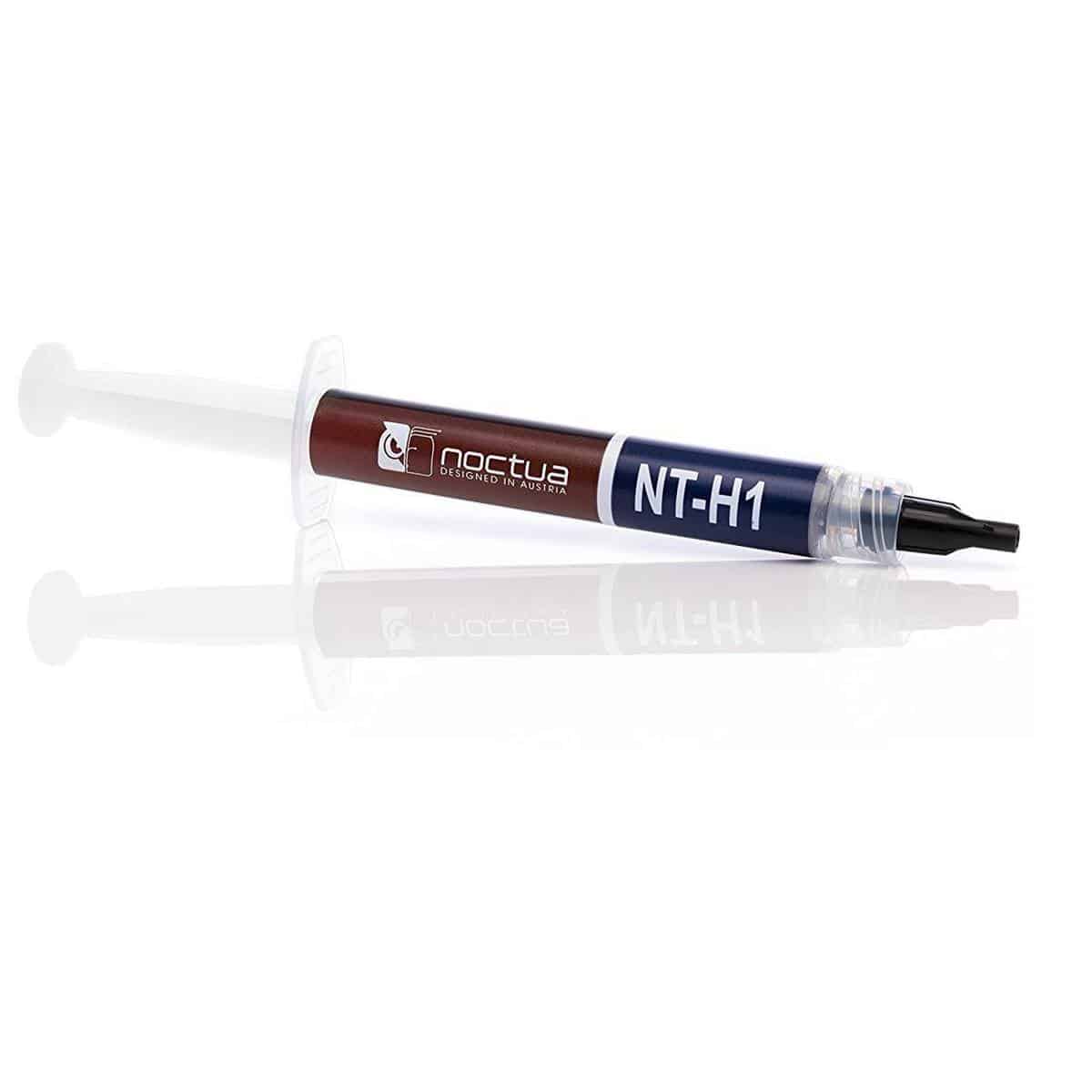 The Noctua NT-H1 is specifically designed for the overclockers in mind. It outperforms the popular Arctic MX-4 and Arctic Silver 5 by up to 3 degrees in CPU temperatures. Easy application and good value make it one of the most popular thermal compounds for mainstream overclocking.

If crazy-high speeds aren’t what you’re looking for but still want your processor to run cool as a cucumber, the Noctua NT-H1 is an excellent and cheaper alternative to the Kryonaut.

Noctua is well known for making excellent cooling solutions for desktop computers. Their case fans are some of the best out there, and the same can be said for the phenomenal CPU coolers. Therefore, it’s no surprise that they’d create a fantastic thermal paste as well.

The ceramic Noctua NT-H1 thermal paste is one of the most loved by mainstream users. It’s decently affordable given its performance and the amount of paste you get (3.5g in a single pack), and its performance is fantastic. Of course, the Arctic MX-4 and Arctic Silver 5 offer more paste, but the NT-H1 succeeds in providing better thermal conductivity and lower temperatures. Regardless, you can expect to apply this 15 times before you run out.

With the NT-H1, you can expect to reduce the temperatures of your CPU or GPU by around 3-4 degrees at higher loads when compared to stock thermal compounds. The completely non-capacitive and non-electrically conductive nature of the paste means there are few precautions to take when applying the paste. 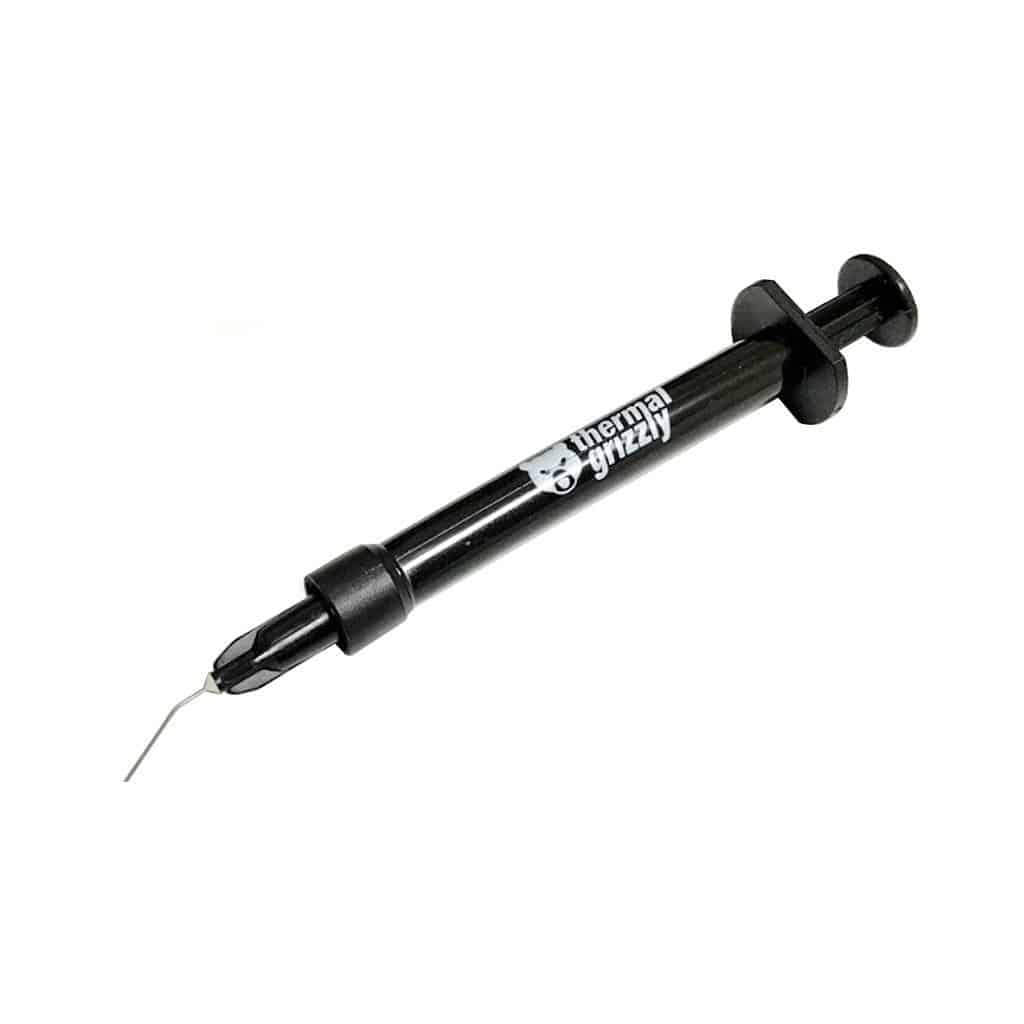 The Thermal Grizzly Conductonaut is a liquid metal thermal paste, one of the rare and more unique thermal paste materials. It’s one of the harder thermal pastes to apply, but it provides unparalleled thermal conductivity that can drastically reduce temperatures.

Though expensive and requiring extensive preparation and care, when it comes to pure thermal performance, there is simply no better thermal paste for overclocking than the Conductonaut.

Let’s make this clear from the get-go: the Thermal Grizzly Conductonaut is not your average thermal paste. This isn’t ceramic, or carbon-based, or anything as such. This is a purely liquid metal thermal paste.

For anyone with a bit of knowledge in physics, it’ll be obvious what this means: this is an electrically conductive compound. That may sound blasphemous to you, but it’s not. In fact, it only makes it the best thermal paste you can possibly get for your high-end desktop computer.

The problem though is that applying this paste requires extreme care and caution. You’ll need to have a lot of experience beforehand of how to apply thermal pastes, but ironically you’ll have to unlearn a lot of what you know about the thermal compound application when using it.

To understand this better, you’ll need to know the entire process of applying this thermal paste. Firstly, you’ll need to thoroughly clean the heatsink of the cooler that you’ll use on your CPU or GPU. You’ll have to clean the contact point with isopropyl alcohol. Next, you’ll need to apply a very small amount of the paste and spread it evenly. Thankfully, Thermal Grizzly includes a brush with this paste for that.

It is also paramount that you do not use this paste with aluminum heatsinks. The liquid metal of this paste will damage aluminum. This also makes it essential to cover all the surrounding parts of your PC with masking tape to ensure it does not come in contact with any other component, or else you’ll be kissing your motherboard goodbye. We highly recommend first-time users of the Conductonaut to watch instructional videos to better understand how exactly the application procedure for this paste works.

Once you’ve applied the paste accurately, you’ll see exactly what makes it so special and why Thermal Grizzly decided to go with this compound. The thermal conductivity of this paste is a staggering 73W/mk – over 6 times as much as our top pick. You can expect temperatures to lower by more than 10 degrees Celsius compared to stock thermal compounds that come with CPU and GPU coolers.

This massive temperature reduction is what gives huge headroom for extreme overclocking of your CPU and GPU. The extensive care, as well as the hefty price-tag that comes with this thermal paste, is worth it if you’re an enthusiast overclocker looking to extract every bit of juice from their PC components as possible. 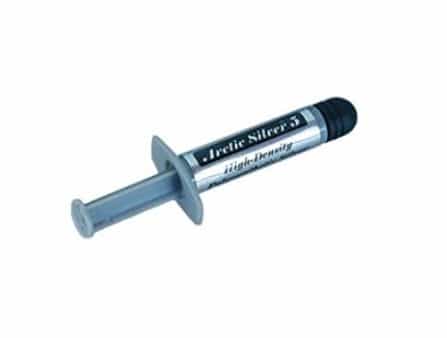 It features a 99.9% pure silver composition along with other micronized compounds for thermal conductivity and corrosion resistance.

Even though it contains silver, it only conducts heat to the CPU fan block, but it will not conduct any electricity. But the company still plays it safe and warns people to make sure it does not come in contact with any electrical pins and traces. 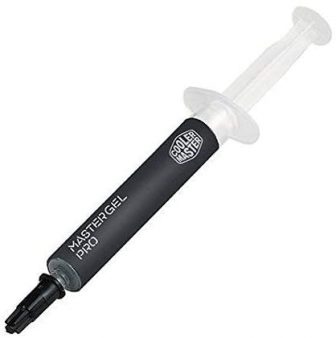 They introduced it with the slogan, why copy-paste when you can swipe? It is because of the unique design of the thermal paste injector. The syringe has a flat top nozzle which allows you to spread the paste evenly and coat the whole CPU properly.

The even coat of thermal paste allows for better thermal conductivity to the CPU cooler block. Cooler Master says they are using an even advanced form of the Nano-diamond particles that makes it a better heat conductor than the previous iteration.