You don’t have to build a PC that takes up half your desk’s space to get excellent results. A mini-ITX motherboard is a great option for anyone looking to build a compact PC without sacrificing too much on performance.

It’s particularly become a popular form factor for mobile gaming PC builds for PC gamers who want to take their rigs around to esports competitions and friends.

When you talk about motherboards, there’s really one major company that comes to mind: Asus. It’s true that they’ve dominated the motherboard market for decades now, and there doesn’t seem to be a competitor in sight who could usurp their throne.

However, this doesn’t mean they’re the only ones who make great motherboards. There are companies like ASRock, Gigabyte, and MSI who also make fantastic motherboards.

We’ve reviewed the 6 best Intel and AMD based mini-ITX motherboards for gaming and other intensive processing requirements. To help you with your purchase, there’s also a buyer’s guide after the reviews highlighting what you should be considering while buying a mini-ITX motherboard. 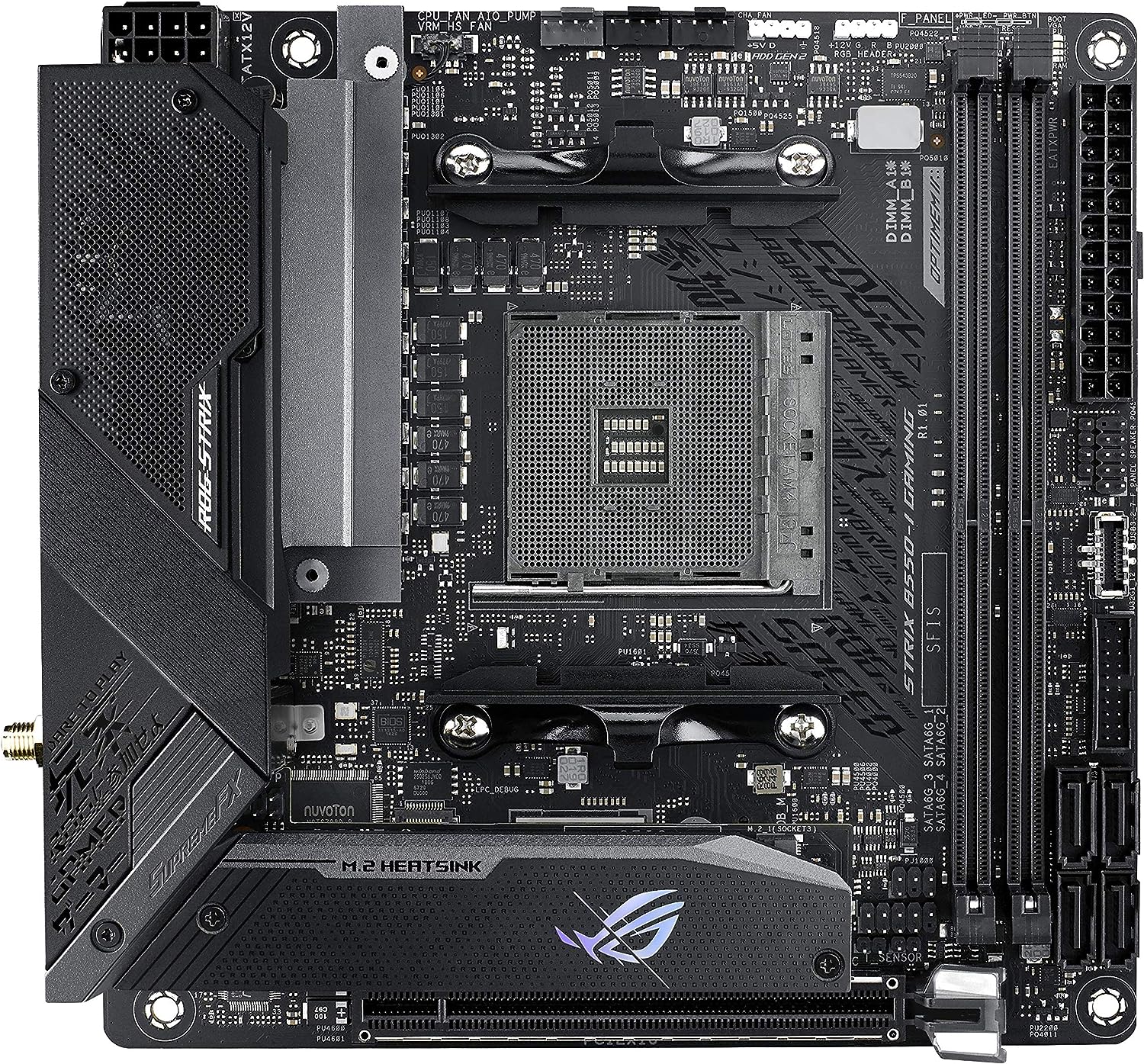 The premium features along with its longevity and a 3-year warranty make ASUS ROG Strix B550-I one of the best mini-ITX motherboards.

The ‘ASUS ROG Strix B550-I Gaming AMD AM4’ is a solid option for a home-based or an office PC. The mini-ITX motherboard can be used for everyday computer needs or even for gaming as well.

Mini-ITX motherboards are great for setting up a home or an office machine. It has a small form factor that not only makes it compact but also very portable. What’s more is that, even though they are smaller motherboards, they can still pack a lot of features and offer great versatility.

There are many options out there in the market from entry-level to high-end systems. The ‘ASUS ROG Strix B550-I Gaming AMD AM4’ is a premium mini-ITX motherboard that is just what your next home PC needs.

ASUS is known for its amazing performance delivery, durability, versatility, feature set, and a ‘more bang for your buck’ pricing. And the ROG Strix B550-I is no exception to this rule. This mini-ITX board has it all and then some.

The board is based on the B550 chipset and offers support for the Ryzen 2000 to 5000 series. The board has no issues when paired up with high-end chips due to its incredible overclocking potential. Using PCI-E Gen 4 GPUs and SSDs is not going to be a problem with the ROG Strix B550-I.

The board is compact and is true to the mini-ITX small form factor. As for its incredible versatility and support, the ROG Strix B550-I features impressive connectivity. The 2 memory slots can be used for up to 64 GB of memory. It has dual M.2 slots for the SSD storage option.

Furthermore, it offers 4 SATA 3 ports, Wi-Fi 6, 2.5G Ethernet, Bluetooth 5, Display Ports, Audio Ports, HDMI 2.1, USB Type-A, and USB Type-C. All of this comes with a 3-year warranty as well. Not only does the ROG Strix B550-I has highly impressive features but is also sure to last a very long time. 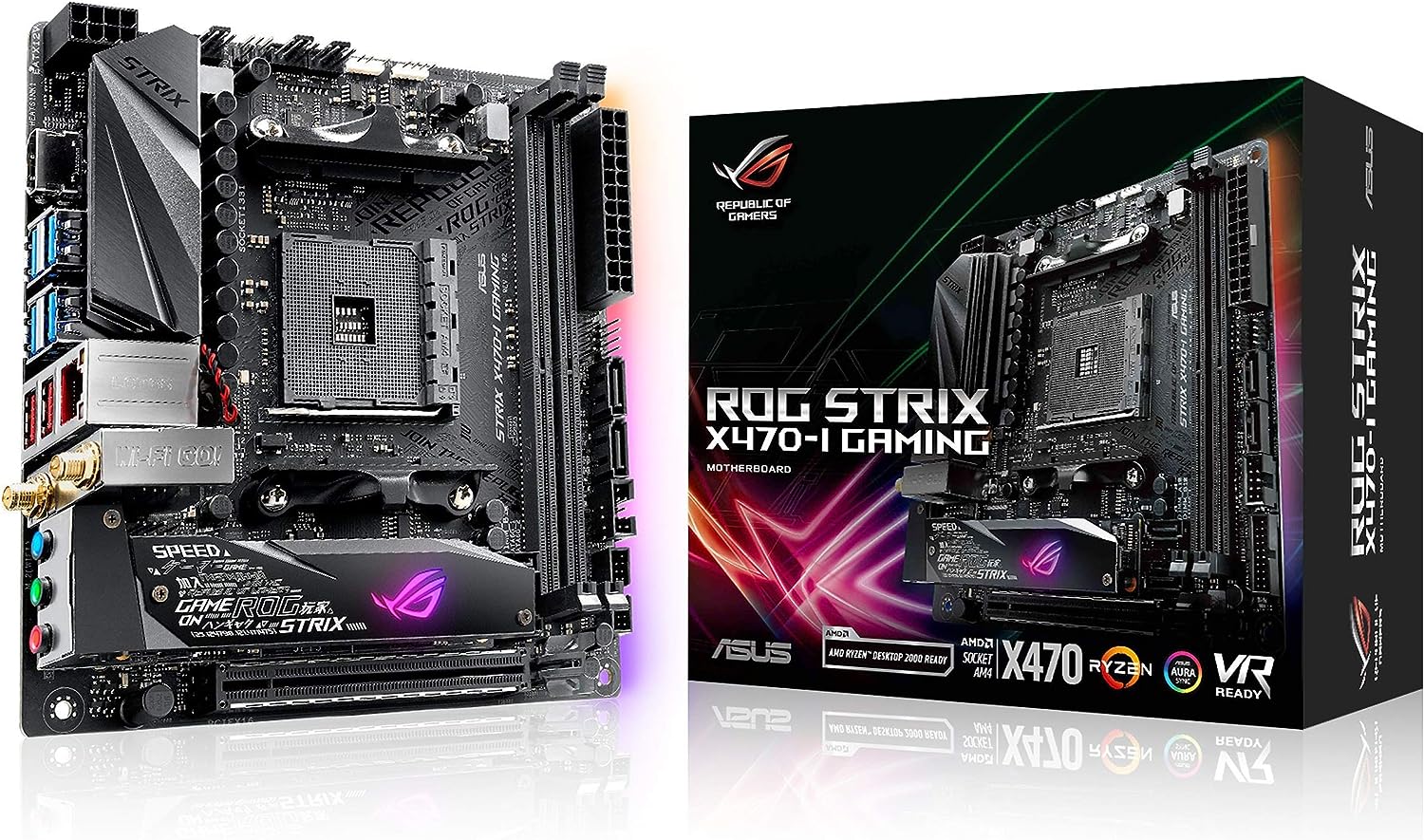 The X470 is AMD’s flagship chipset, and Asus incorporates it into this powerful mini-ITX motherboard along with gorgeous RGB lighting and more. It is one the smallest mini-ITX motherboards out there, which is saying it has something considering how powerful and feature-packed it is.

If you’re going for a compact and powerful Ryzen build and want the most suitable mini-ITX motherboard for it, look no further than the ASUS ROG Strix X470-I.

Asus decided that for some strange reason, the mini-ITX motherboard with the AMD AM4 socket should be a lot smaller than the Intel counterpart. It’s an incredibly tiny motherboard that underscores what the mini ITX form factor is about.

And we absolutely love it. For any compact AMD Ryzen build, this is by far the best mini-ITX motherboard you can buy. Not only is it incredibly small, but it is also packed to the brim with all the essential high-end features.

This includes 4 USB 3.1 Gen 2 ports at the back, an m.2 PCIe slot with an included m.2 Audio Combo riser to install NVMe SSDs for the fastest read/write speeds possible with modern technology.

Additionally, you get the signature Republic of Gamers RGB lighting for ultimate customizability so you can let the entire world know you’re packing a real beast in there. The BIOS is excellent as well, and there is 5-way optimization to automatically tailor overclocking profiles for the best performance and thermal stability combination. ASRock has some amazing budget boards out there, the Z390 Phantom Gaming Mini-ITX board is one such example, the functionality of the board is supreme compared to its price tag, truly a beast in the small form factor.

Don’t let the small size fool you, even these small boards can play the best games out there seamlessly and the ASRock Z390 Phantom Gaming Mini-ITX board is one example. It supports an Intel 8th and 9th Generation CPU, it goes superbly well with the 9th Generation processors and is able to pull out the best from it.

It offers so much in the small price tag, you get 2xM.2 slots for your SSD to get amazing loading times and you even get an M.2 Key for Wi-Fi/Bluetooth Module. You do not get so many options in Mini ITX boards, making it the perfect one for your needs.

It already has a built-in RGB strip underneath it on the bottom, so you get the RGB goodness right off the bat, you get 2 RGB light headers, one is 3-pin while the other is 4-pin. You have more than enough connectivity options inside for the front IO panel, and in the back IO you get around 6 USB 3.1 ports, 4 of them are Gen2 for those super-fast speeds and 2 are normal Gen1. The highlight of the rear IO is the Thunderbolt 3 port which is much sought these days and is high in demand in boards.

Since the Z-series chipsets are able to overclock you need can push your computer to its limits with this board right here. With support for the latest desktop processors, you will not need any other board for a long time once you get your hands on this one. And it is under the $200 mark on amazon, so it is super cheap.

The PCIe Slot is reinforced, you get quality audio with the Nichicon Audio module and all this functionality in the Z390 Phantom Gaming Mini-ITX board by ASRock. ASRock has risen to recognition with its motherboards, and their Fatal1ty X470 is our second favorite high-end mini-ITX motherboard for AMD builds. Packing the X470 chipset and the AM4 socket, this motherboard comes with its own RGB system integrated into it.

You also get Intel 2T2R Dual band WiFi and the package comes with a customized antenna. We also love that it has support for an m.2 SSD (slot at the back of the board), so you can install the most powerful NVMe SSDs out there for ultra-fast read/write speeds. The Gigabyte B360N supports Intel 8th Generation processors and is intended to be used with locked Intel processors. If you plan to purchase the Core i5 8400 which we considered currently our favorite CPU for gaming, pairing it with this Gigabyte mother is a great, cost-effective combination that won’t require compromise in gaming performance.

The B360 chipset offers dual channel memory, USB 3.1 generation 2 ports, and more. We consider it a superior chipset for budget mini ITX motherboards than the H310.

Gigabyte’s offering comes with Intel CNVi 802.11ac Wave2 2T2R WiFi and can support a maximum 32GB of DDR4 RAM. Windows by default does not support the wireless adapter of this motherboard, but you can install a separate driver available from Gigabyte’s website.

For less than $100, the Gigabyte B360N is an excellent choice for anyone looking for a high-quality motherboard for gaming at a tight budget. Of course, at this price point, you shouldn’t expect an m.2 NVMe slot or other bells and whistles. The more affordable option for AMD builds is the ASRock Fatal1ty AB350. This mini-ITX motherboard by ASRock utilizes the less powerful AB350 chipset instead to power AM4 Ryzen CPUs.

You’re still getting plenty from this motherboard though, including a whopping 6 USB 3.1 ports, including a Type-C. However, all these ports are Gen1, not Gen2.

Two DDR4 DIMM slots allow you to install up to 32 gigs of RAM that can be overclocked to more than 3466 MHz. Additionally, you also get an ultra m.2 PCIe slot at the back to install a powerful m.2 NVMe SSD for the best read/write speeds technology can currently offer.

Given the price, it’s a great little offering, though we’d still recommend individuals to save up $25-30 more and buy the X470 version reviewed above instead. Still, if you prefer using the money you save with this for other parts of your build, then this is a solid option where sacrifices are only a few and far.

The debate of which company is making better processors has been over for a while now. Both go neck and neck in their performance and appeal, but each caters to a specific computing niche more than another.

Intel still remains the processor brand of choice for gamers as their Core i5, i7, and i9 processors offer the highest clock speeds and, concomitantly, the best overall performance. However, this isn’t to say AMD’s second generation of Ryzen CPUs are bad at gaming – they’re still a fantastic choice for anyone, especially considering how affordable they are.

Regardless of which you choose, the brand and model of your mini-ITX motherboard will be directly based on the processor choice.

Regardless, you can still build a powerful computer with a mini-ITX motherboard. All the motherboards we’ve reviewed for Intel and AMD have at least 32GB of RAM available over the two DIMMs, and all of them are dual channel memory capable for better synchronization.

The Asus ROG Strix Z390-I is the only mini-ITX motherboard that supports more than 32GB RAM, but it also costs a lot more than any of the others. Nevertheless, 32GB RAM is more than sufficient for all but the most intensive computational tasks out there.

You’re buying a mini ITX for two reasons: affordability and size. The latter is also dependent on your case. You can fit mini-ITX motherboards in many full ATX cases, but you’re defeating the purpose of choosing such a small form factor in the first place.

It is thus recommended to go for a micro-ATX case or a dedicated mini ITX PC case if you’re buying a mini-ITX motherboard. For gaming and other intensive tasks, we recommend a micro-ATX case that has space for additional fans, a CPU cooler, and good cable management.

If you’re seeking a more portable rig, then a dedicated mini ITX PC case is the way to go.

Why go for the mini ITX form factor?
In addition to offering the most powerful chipsets for Intel and AMD at a more affordable value, the mini ITX form factor also provides users the chance to create a more compact rig. This is usually preferred by gamers who take their rigs to events and those who have little space on their desks.

Can you build a powerful gaming PC with a mini-ITX motherboard?
Absolutely. A powerful Core i7 processor can fit in any Asus ROG Z370 or Z390 mini-ITX motherboard, and you can combine it with 32GB RAM, an m.2 NVMe SSD, a great micro-ATX or mini-ITX case, an Nvidia GTX 1080, and some cooling solutions to create a complete beast of a system.

Are ASRock and Asus the same company?
ASRock started off as a spin-off of Asus, but since July 2010 they have been owned by Pegatron, which is completely independent of Asus. In fact, Pegatron is a competitor of Asus.