An upgrade from your old SATA to the modern NVMe m.2 SSD will make a huge difference to the speed of your computer. Modern storage drives come in the well-known “gumstick” m.2 format that have gotten a lot faster – almost 4 times as fast as SATA SSDs.

Every year manufacturers release a new series of m.2 drives that one-up their predecessors in both price and performance. It’s hard to keep up with this technological progress, which is why this article exists.

If you’re confused about the evolution of data storage technology, we can’t blame you. The design and technology behind data storage have changed rapidly in the past few years. Every year new m.2 SSDs come out and the ones prior to them become obsolete, slower, and lack the same cost per GB value as newer models.

We’ve handpicked the 5 best NVMe m.2 SSDs you can buy today based on their speed, endurance, and cost per GB value. To help you with any confusion regarding the current technology, there’s also a Buyer’s Guide and FAQs section after the reviews.

The Samsung 970 Evo is this year’s top model for its incredible read/write speeds and a good cost per GB when compared to others. It comes in a wide range of capacities and is four times faster than SATA SSDs.

Samsung’s 970 Evo is the hands down the best m.2 SSD you can buy in 2018 because of its incredibly stable, reliable, and fast performance that doesn’t demand a premium price.

Samsung started the trend of NVMe m.2 SSDs, and they constantly deliver with their 900 series. The 970 Evo is, without a doubt, the best overall m.2 SSD in the market right now. It features incredible performance, lots of capacity, and comes at a price that at least won’t scare you away if it doesn’t attract you.

It’s not the fastest m.2 SSD in the world, but it is the most stable and best overall on a price per GB and speed point of view. The 970 Pro has the EVO beat for sheer speed, but it’s not something you’ll be able to tell without an SSD benchmark test.

The endurance of the Samsung 970 Evo is also impressive. It comes in a wide range of capacities and compared to SATA SSD drives it is four times faster. 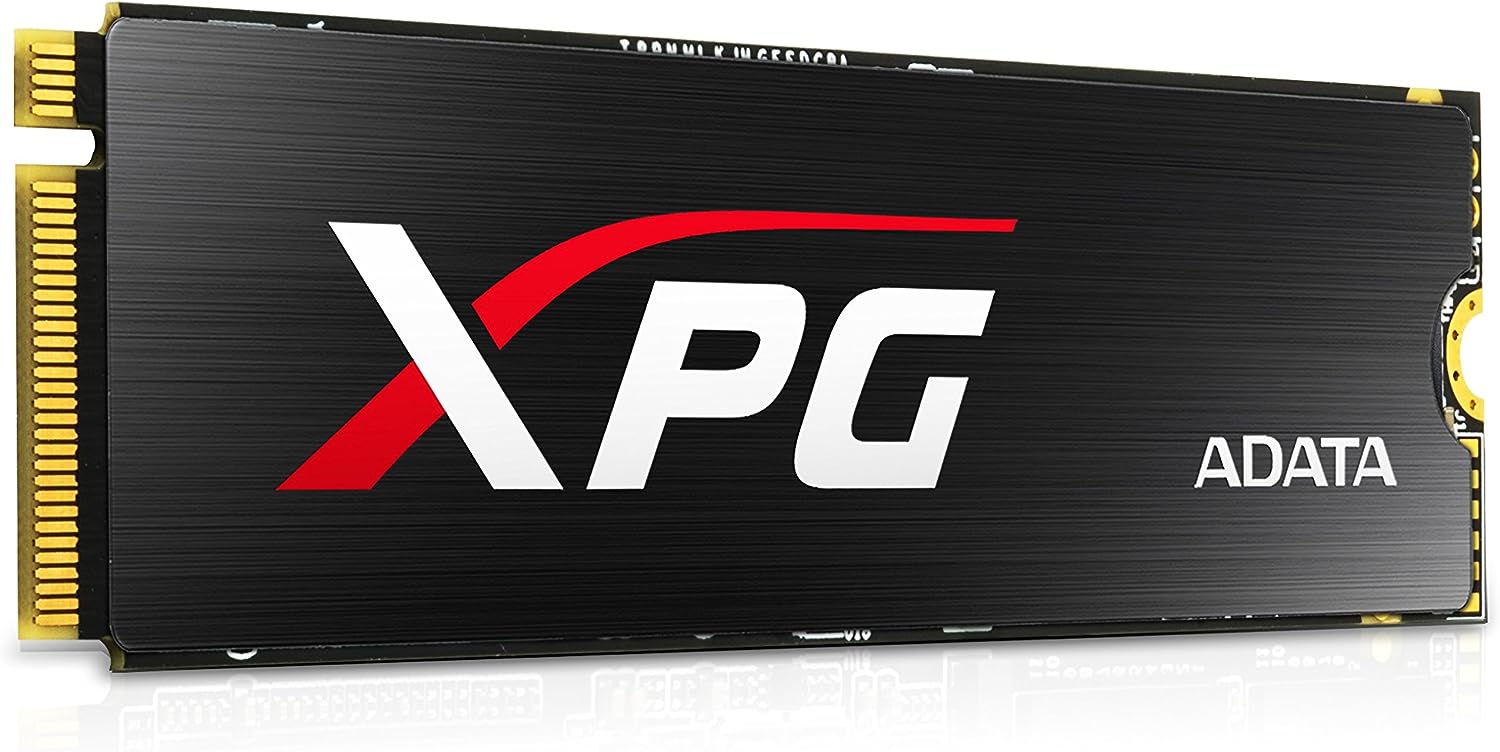 The Adata XPG SX8200 offers great speeds and excellent endurance at a fantastic price. In terms of value, very few m.2 solid state drives can compete with this model. It offers the same fast controller Intel uses on its m.2 SSDs.

If you’re looking for an affordable yet fast m.2 SSD, the Adata should be one of your top considerations as it boasts incredible cost per GB.

Adata and Intel are the MVPs of the SSD industry because they’re hell-bent to find the best ways to decrease the price per GB. The Adata XPG SX8200 is a fantastic budget option for those unwilling to dish a ridiculous amount for an m.2 SSD.

Coming in at a single capacity of 480 GB, this NVMe m.2 SSD is the best offering speed-wise from Adata. The SX8200 uses the SM2262 controller which is the same one used in the Intel 760p. the sequential read/write speed of the Adata XPG are 3,200 and 1,700 MB/S respectively, which is better than the Intel 760p.

In real life situation, the difference is minimal, and Adata’s offer is hard to ignore because of cost-effective they are compared to others. It’s a perfect solution if you want to build a fast PC but feel uncomfortable investing so much in your m.2 SSD.

If you want a great alternative to the 970 Evo, the Western Digital Black NVMe m.2 SSD is a great option. It costs slightly less than the 970 Evo and is nearly as fast. The read speeds of the WD Black are the same as Samsung’s 970 Evo. The difference, however, is in the write speeds which are marginally slower.

The 2018 Black is WD’s correction of their mistake with their first series of NVMe drives. The new model features 3D NAND and its performance can nearly match the 970 Evo.

The WD Black struggles a bit with heavy sustained random writes, but for gaming computers and general desktop use this is perhaps the second-best option available after the 970 Evo. Depending on the pricing in your area, it’s a toss-up between the WD Black and the Samsung 970 Evo even though the latter perhaps better on paper.

Balance between performance and price

The Sabrent Rocket is a great choice when it comes to budget SSD, it has some super-fast read and write speeds comparable to high-end M.2 SSD drives, but still very cost-efficient, with the 256GB variant just below the $50 belt.

At a great price and efficiency, the Sabrent Rocket is one of the best budget buys that will boost up your loading times significantly. It is not the best SSD out there, but for the price point it is a great deal, you get 3400MB/s read speed and a 2750MB/s write speed on the 2TB variant of the drive. The speed is lower on the cheaper variants, but it is still a significant upgrade from your normal HDD.

Overall we do not have anything bad to say about the SSD, it is reliable, they do not falsely advertise, yeah the speeds could be slightly better, but they compensate with a low price tag which is what we look when we are on a budget.

Everyone in the hardware world is familiar with the name Seagate and their reliability and performance in storage hardware, the Seagate Firecuda 510 is a PCIe 3×4 M.2 SSD that is extremely good and reliable while also being somewhat affordable.

The Firecuda series from Seagate is often known for faster speeds and is aimed towards gamers. They are somewhat expensive from their Barracuda products, but also perform better than them. The Seagate Firecuda 510 comes in 3 variants according to capacity, 512GB, 1TB, and 2TB, with the 512GB below the $85 price point which according to us is a great deal if you compare it with other high-end SSD drives.

It has some amazing read speed of 3450MB/s while the write speed is 3200MB/s which makes it comparable to high-end SSDs in the market. With the reliability of Seagate, the Firecuda 510 is a great buy, which comes with a 5-year limited warranty.

The most important thing you need to look at when buying your m.2 SSD is the bus your desktop or laptop computer uses. The bus is the trickiest part of an m.2 upgrade.

A few years ago, most m.2 drives were just SATA drives in a smaller form factor. They were designed to be small so they could fit in thinner laptops and narrower desktop towers, and that was the only real advantage to them.

Much has changed since then. While older m.2 SSDs that use the SATA bus still exist, the majority of the newer models all utilize the faster PCIe x4 bus. This bus allows them to unleash their incredible speeds.

How does that information determine your purchase decision? You need to know which bus your desktop or laptop utilizes. In case of laptops, there isn’t much you can do if your machine supports m.2 SATA bus SSDs only. You can only swap them out for m.2 SSDs designed for SATA.

However, it is a bit trickier with desktops to figure it out. Some motherboards have m.2 slots that support both SATA bus and PCI-e bus on the same slot. Others offer more exclusivity, supporting only SATA or only PCI Express.

Furthermore, not all motherboards that have PCI-e bus on their m.2 slot will support PCIe x4 or NVMe. Make sure you do thorough research on what kind of m.2 slot your motherboard has before you purchase an NVMe m.2 SSD.

Not all m.2 SSDs come in the same size. Though the width of the m.2 SSD standard is fairly consistent, the length varies a lot. This is a much bigger issue with laptops than it is with desktops.

The length of the SSD can vary between 42mm, 60mm, 80mm, and 120mm. This length can often vary with the storage capacity, but there are other factors (such as the controllers on the board) that make an m.2 SSD longer as well.

The cost per GB of an m.2 SSD is the main yardstick by which the affordability and overall value of the drive are measured in the industry. You should expect the higher cost per GB for PCI-e x4 NVMe SSDs, and even within them, there is a considerable variation that depends on the architecture, storage, speeds, and performance.

To get the cost per GB of an SSD, divide the price in dollars by the capacity of the drive in GB. If two m.2 SSDs have similar performance but one has a considerably lower cost per GB, then you know that is the one you should go for.

What does NVMe stand for and why is it so special?
NVMe stands for Non-Volatile Memory Express. It is an improved interface over older memory interfaces that combine with PCI-e to maximize the data transfer speeds for flash memory (solid state memory).

Are SATA m.2 SSDs obsolete?
It’s harder to find new m.2 SSDs that are designed for SATA. Modern PCs and laptops all utilize a PCI express powered m.2 interface. SATA SSDs are more commonly found in 2.5-inch drive models instead of in an m.2 format.

What do some m.2 PCIe drives have a better price per GB than others?
This is a difficult question to answer as it depends on a lot of things. The most important and common is the technology involved and how much it costs to design/manufacture these drives. Factors like controllers, storage, speed, technology type, brand name, and more create the variation in the price between m.2 SSDs.

What is endurance?
Endurance is the amount of data you can write on a drive before its function could drastically decrease. This amount for m.2 SSDs is usually very high, between 300 to 600 TB. This means that you’ll be able to write over 300 to 600 terabytes of data on the drive before it begins to show signs of malfunction or expiry. With average consumer use, this can take decades.