Best Laptops for College Students in 2021 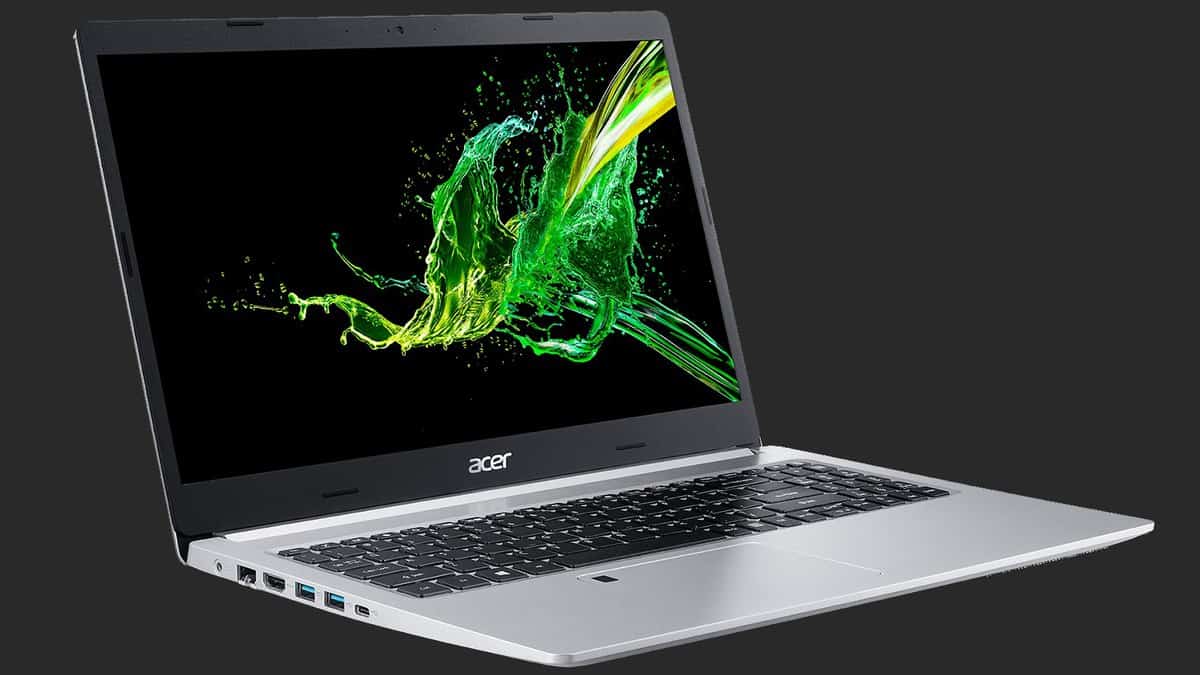 Students have a tough life, their education is expensive, they are under debt even before getting a job. Buying expensive gadgets is not an option for them, but they have to stay up to date as well. Because otherwise they might be left behind compared to the times. In other words, they need the best laptops for college to help them with the assignments.

When we talk about the best laptops for college, we are talking about budget laptops in their categories. These laptops will mostly be used for writing their assignments and taking notes during classes. Watching YouTube tutorials and playing media is also going to be a major thing for students.

Most student tasks do not require a high spec hardware configuration on a laptop. But it can still be a problem for students to know what kind of laptop to pick up. There are many models with different configurations in the market today. That is why we have reviewed some of the best ones for them.

Students might not need a high-end device for doing their work, but there are some important specs that they require. It needs to have a somewhat competent processor and enough memory that will run all document making applications. Whether it is a PDF file or a PPT, they need to be able to work on those without problems.

The laptop also must have a good battery life, because college students are on campus most of the time. That makes it very difficult for them to charge their battery often. So battery life of at least 8 hours is a requirement for them. Unless the students are in college and majoring in something like Computer Sciences or Visual Arts, they do not need a GPU.

Some institutes have lab services where college students can work on hardware extensive projects. But for most of their daily activities, like taking notes and studying, a light laptop with basic specs works the best.

We have included a few Chrome Books on our list because they are very popular amongst college students. They have good battery life and can handle light loads without any issues. They are also very cheap so most students can pick one up without burdening their financial situation. Finances are a huge problem for students unless they have a scholarship.

Best Laptops for College Reviewed According to Price and Specs 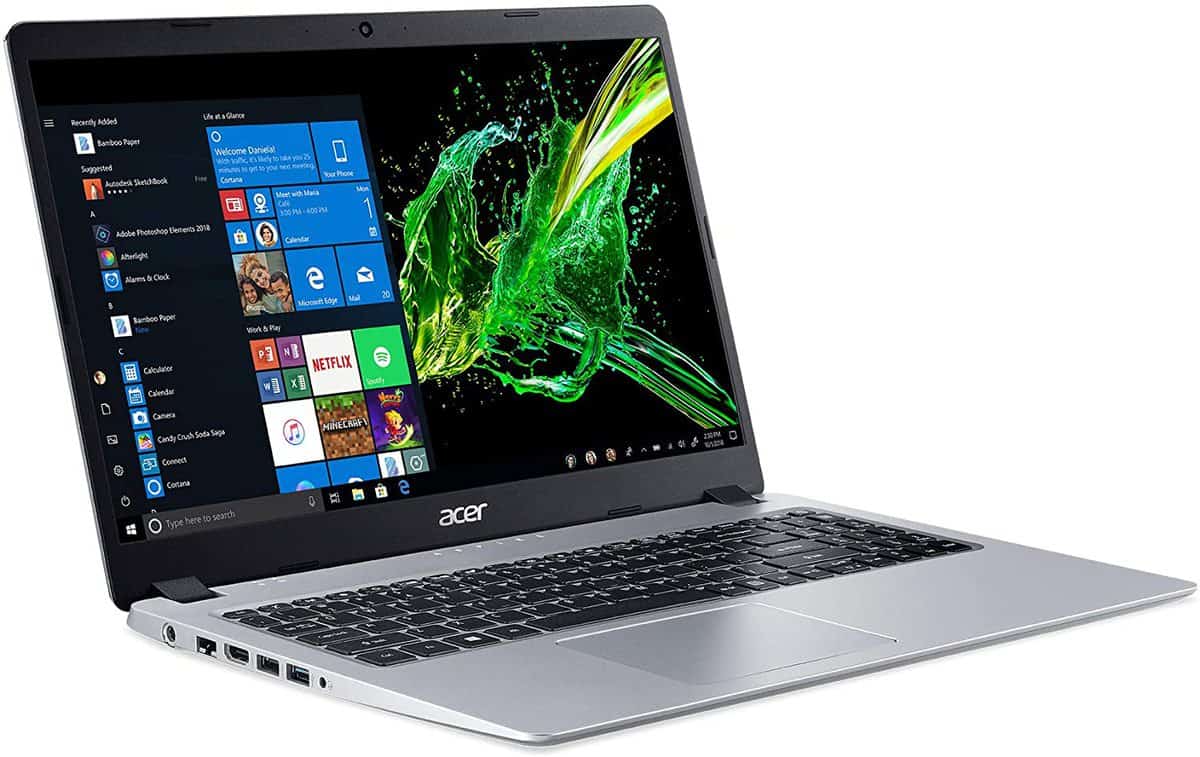 The Acer Aspire 5 Slim is one of the few laptops that offers you an option between Intel and AMD. What we reviewed was the one with a Ryzen 3 3200U with built-in Vega 3 Graphics. Let us tell you, you will not be disappointed by this laptop’s performance. The best part about it is that it’s affordable!

Check Price on Amazon
With built-in graphics and a 3rd Generation Ryzen 3 3200U, you are sure to have no problems running any important programs on this laptop.

So this laptop has a Ryzen 3 3200U, a dual-core mobile CPU that has 4 threads. It has a base clock of 2.6GHz and a boost clock of 3.5GHz along with 3 GPU cores. The Radeon Vega 3 Graphics built-in the CPU will be able to bear light graphical loads.

The multi-thread CPU allows you enough power to multi-task on the laptop easily. So whether you are a student of Visual Arts or Business, this laptop will be able to hand most applications easily.

The CPU has a max TDP of 15W so it is quite an energy-efficient processor. Since it is a U model, it does not have the ability to overclock as these laptops are meant to preserve power. The laptop itself is packed with 4GB of memory and 128GB of SSD for lightning-fast storage.

The laptop also has 1 USB 3.1 Gen 1 Port, 2 USB 2.0 Ports & 1 HDMI Port, making it ideal for student use. It has Wi-Fi 802.11ac so stay connected to the internet throughout the campus grounds that have wireless internet. And a backlit keyboard as well if you are working at night in the dark and sharing a room with a roommate trying to sleep.

Overall we really loved this laptop as it was able to work on most tasks we threw at it. It has a 15.6″ 1920×1080 resolution FHD Widescreen IPS display that gives you a crisp image. With a 7.5-hour average battery life, which is not that great but pretty good, this laptop is super affordable.

You can find it on Amazon under $400 for all these great specs, which we believe to be quite a bargain. Chromebooks can cost you around $250 to $350 with specs not even close to these. 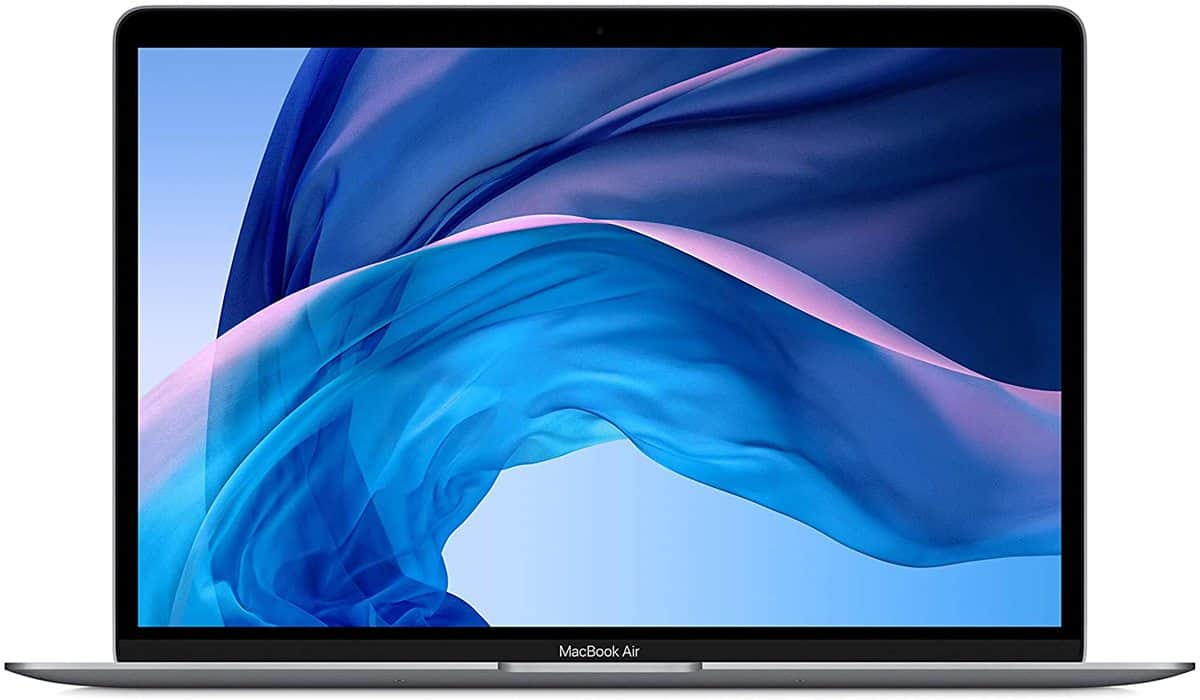 For those who can afford, Apple’s MacBook Air is a perfect laptop that is well rounded for most student tasks. While being a premium choice, it has some pretty great specs, not to mention the efficiency of Apple.

Check Price on Amazon
The newer model of Apple MacBook Air was released in 2021 with almost the same specs as the previous model. You get 10th Generation Intel CPU with Iris Graphics which are way better than the UHD ones in older Intel CPUs.

Apple has always been a very expensive brand, you just cannot deny this fact. However, Apple has some great features, whether it is the iPhone or the MacBook, they function great. In the end you pay the extra bit for the exclusive features and the brand.

If you are a scholarship student and can afford the MacBook Air, then we suggest you go for it. It is a reliable piece of hardware with a 10th Generation Intel Core i3-1000NG4. It has an Intel Iris G4 built-in GPU in the processor that can handle mild graphics tasks.

While the Iris G4 has half the Execution Units and Shader blocks compared to the Iris G7, it has the same clock speeds. But half the units do cut down its graphical prowess by half as well.

The Core i3 has a base clock speed of 1.1GHz and a boost clock of 3.2GHz with 2 cores and 4 threads. With multi-thread support, you can multi-task easily on the MacBook Air without any lags.

You also get 8GB memory along with 256GB Solid State Storage, which you can expand up to 512GB SSD. This makes the MacBook quite a competent laptop and the perfect for students who can afford it.

The 13.3-inch Retina Display gives you a crisp quality image thanks to the True-Tone technology. The new Magic Keyboard by Apple is also a welcome feature for most, it has a travel distance of 1mm.

Lastly, it has great audio and video capabilities, with an HD camera for video calls. The battery life is also large, with an average of 9 hours battery life which can last you the whole duration of your time on the campus. 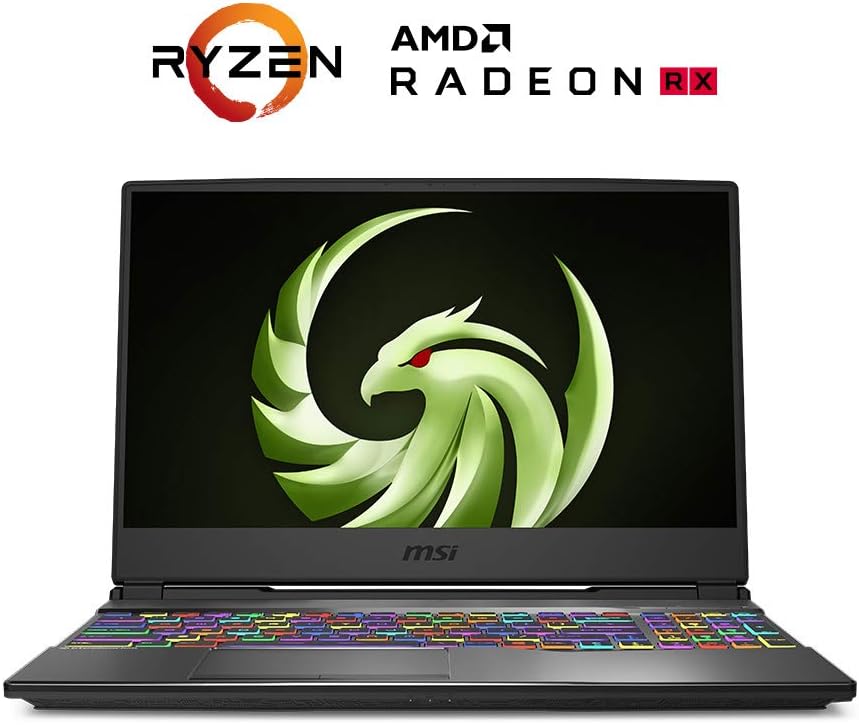 The MSI Alpha 15 is what we call an all AMD laptop by MSI, it is super affordable and costs under the $1000 mark.

The MSI Alpha 15 not only has an AMD CPU but also an AMD GPU. Not a lot of AMD GPU laptops out there in the first place so this laptop is unique in its own right.

The MSI Bravo 15 is rebranded MSI GL65 with AMD components, it is almost identical to it in all ways except for the logo and branding. You can see that instead of the red Dragon logo we have a green bird one.

The GPU is the RX 5500M which is the mobile variant of the RX 5500 GPU, so it is packed with all of the AMD goods. The RX 5500M works greatly and can run games at ultra settings. Of course, you do not get any of the goodness that is offered in the RTX GPUs though.

For memory, you have 16GB of RAM, and for storage, you have 512GB of NVMe SSD. The laptop does not seem to have problems with thermals like the Bravo 15. But it also has a subpar display. So using this display for anything other than gaming would not give you good results.

Using this laptop for content creation would be a serious mistake, this laptop is only good for gaming. One thing though, the laptop does not have a powerful battery, while gaming you can barely get around 3.5 hours of battery life.

Now, for the price range, this laptop is not bad in the least. But other brands offer significantly better laptops in the same price bracket.

Would we suggest this laptop? If you want to go team AMD there might not be a better laptop in the market. But this laptop has a poor battery life and a substandard display. 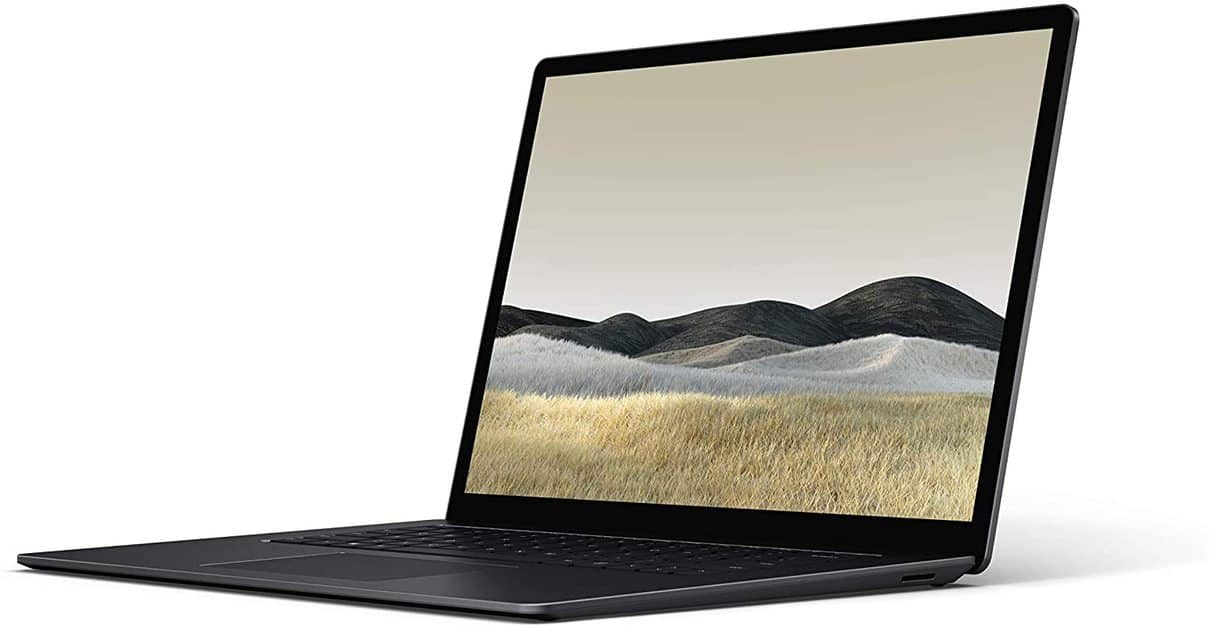 Microsoft brings the best of both worlds with its successor to the Surface Laptop 2 with Surface Laptop 3. This one gives you an option to choose the AMD path with a custom made Ryzen 5 and 7 CPU along with the usual Intel processor.

The newest laptop by Microsoft is an expensive powerhouse that has become pretty famous in students these days. The Microsoft Surface Laptop 3 is the first in the line to have an option between Intel and AMD CPU.

You can either get this laptop with a custom made Ryzen 5 or 7 if you choose AMD and an Intel i5 or i7 if you choose team blue. So you better believe that the performance on this laptop is superb, rivaling that of the MacBook Air. That is why you can call this laptop the biggest rival at the same price point as it.

The 15″ 2496 x 1664 HD touch display, which is often used by artists for drawing artwork due to its responsiveness. You can get up to 32GB of RAM, with the base model having 8GB memory. You also get a 128GB of M.2 NVME Solid State Storage for the base model which is expandable up to 1 TB.

For AMD you get Vega Graphics while if you choose Intel you get the Iris Graphics. Either way, it has better GPU performance than most laptops in our list, so you can perform some light GPU intensive tasks on this.

Lastly, this laptop boasts an extraordinary battery life of 12 hours on average, but these numbers are at lower brightness. With bigger workloads and higher brightness you can push at least 7 hours out of the Surface Laptop 3. 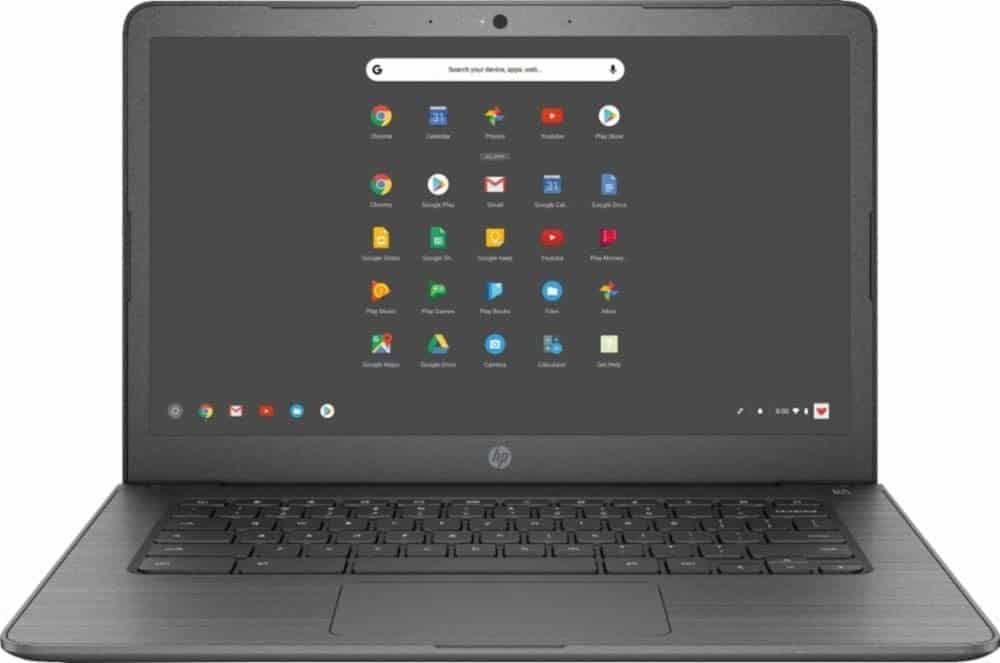 HP brings us a Chromebook, both light and efficient that too for a very reasonable price. In it you can choose either an AMD A4-Series CPU or an Intel one.

Check Price on Amazon
When it comes to performance, this laptop can lag a bit behind, but it is light and portable. Also very reasonably priced for its specifications, so students can easily afford it.

The AMD A4-9120C in the HP Chromebook 14 is a dual-core processor with integrated graphics. This allows you to use your laptop without lagging a lot and can playback the media smoothly.

You get 4GB of LPDDR4 RAM, which you can expand up to 8GB if you have the money for it, but 4GB is enough for a student’s task. This Chromebook also has either a 32GB or 64GB storage depending on your budget.

You get the HP Chromebook 14 has rounded off edges, perfect for storage in student bags. It also has a variety in color from Chalkboard Gray, White, and Ceramic White to go with its stylish look.

Lastly, the HP Chromebook 14 has an HD Webcam and SD card reader, the LED on this thing is an IPS display with a resolution of 1366 x 768.

The bad side of it being portable is subpar battery life, not having such a great display and bad sound.