A high-end gaming monitor will probably be the final cog in your behemoth of a gaming rig to complete the ultimate setup. It’s not going to make your videogames run any faster, but it’s essential for the experience and immersion it offers. And of course, at least 30% of gaming is eye-candy.

There’s no point using a $4000 PC to run games on a sub $100 monitor, especially if you’re a professional gamer or enthusiast. You’ll want the best the market can offer. We’ve got you covered.

Okay, we’ll let you know straight away: high-end gaming monitors are expensive. They’re the high-end after all, and they work with highly strict tolerances to give the best mix of performance and visuals that a monitor can possibly give.

You’re expected to pay anywhere from $500 all the way to nearly $2000 for a high-end gaming monitor, depending on how extreme you want to go. We’ve reviewed the 5 best of the best for you here and so you have an easier time picking your poison. It is difficult to choose a gaming monitor these days, but with this monitor, you will not need to think twice, choosing the Alienware AW2720HF is a no brainer because of how superior the aesthetics of the monitor are while delivering the best performance available.

240Hz refresh rate and 2ms response time, this monitor is one of the top tier ones available to gamers and performance isn’t the only thing this monitor packs.

A 240Hz refresh rate and 2ms response time are just crazy amazing, for those who are hardcore gamers, they know how every millisecond counts when it comes to winning and losing in a game. The colors are of the display do not fall short of the performance of the display either.

Another plus point for the monitor lies in the aesthetics, the gamers are gonna love it, the white back is just amazing. It also has RGB for gamers who just love their RGB more than anything. 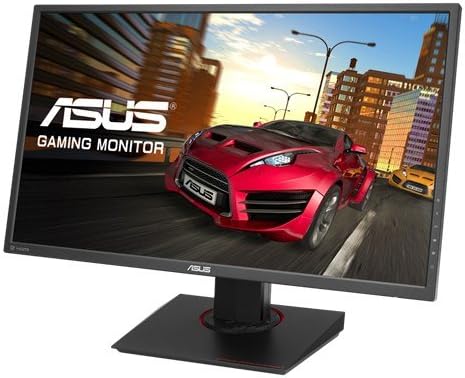 Coming in at almost $200 less than the PG279Q, the ASUS MG279Q is very similar in specs and performance to its more expensive brother. It utilizes AMD’s FreeSync technology instead of Nvidia’s G-Sync and doesn’t offer to overclock for its refresh rate. Yet despite that, it reproduces great images and is the popular choice for those who don’t need a G-Sync monitor.

If you’re not using an Nvidia graphics card or simply don’t care about G-Sync technology, you’ll be happy saving $200 and buying the MG279Q instead of the PG279Q for similar performance and visuals.

If you’re on the AMD side of things and utilize their graphics cards, you’ll want to take advantage of FreeSync. The ASUS MG279Q is a great alternative to the ROG Swift PG279Q for AMD users and those who want to save up on a good $200.

Spec-wise, this gaming monitor is similar to its Nvidia swayed brother. It doesn’t boast the Republic of Gamers tag, but we’d be kidding ourselves if we thought that played a huge difference in picture quality.

While we’re on that topic, the picture quality of this gaming monitor is excellent right out of the box. Minimal adjustments are required to get the desired color accuracy, and even if you do it will only take a jiffy.

It has a refresh rate of 144Hz, but unlike the PG279Q this Asus monitor isn’t overclockable to 165Hz. To be fair to it, the real-life difference between 144Hz and 165Hz is negligible anyway. As an AMD user, you can be assured that no IPS display will be able to match the offering of the Asus MG279Q for gaming. When it comes to 4K, you do not get much options when it comes to specs, you usually get the 60Hz refresh rate, which is common in almost all 4K monitors. But the Acer Nitro XV273K is truly a 4K gaming monitor because it exceeds the limits of the others by giving you better specs, so you can enjoy your games with ultimate experience.

So as the GPU giants are competing we are about to get a breakthrough there, however, we are not seeing a lot of monitor brands in the 4K department working on things like refresh rate. That is because not a lot of games support 4K gaming and if they do, they require some massive GPU power. But with the latest GPUs from both AMD and NVIDIA and their upcoming cards with new architectures, we can expect they will be able to support 4K better. That is where the Acer Nitro XV273K comes in with its 144Hz refresh rate and 1ms response time.

When you are buying this monitor you can expect it to last for a long time before you even need to think of getting an upgrade because this monitor will give you the best performance. This gaming monitor supports both FreeSync and G-Sync so you are not going to have a tug of war in mind when choosing what GPU to choose. The Acer Predator X34P takes the original popular X34 ultrawide gaming monitor and improves upon it to provide a more competitive pricing. One of the biggest complaints with the original X34 was how its much-advertised curved display was too subtle. The Predator X34P fixed with that with a more elaborate curve that is a part of a smaller radius.

Additionally, it also improves upon the refresh rate of the original X34 ultrawide monitor, bumping it from 75Hz to 100Hz. The G-Sync powered monitor can be further bumped up to 120Hz through overclocking for smooth, tear-free gaming.

After some calibration, the Predator X34P ultrawide monitor can produce accurate color and gamma with decent contrast. The contrast isn’t up to par with some high-end VA panels, but it’s still excellent and indicative of the price you have to pay for this ultrawide monitor. There isn’t a single gaming monitor that can beat the ASUS ROG Swift PG27UQ when it comes to specs. This is the set of features people dream about. Utilizing a powerful AHVA panel, the PG27UQ Asus gaming monitor packs the holy trinity: 4K resolution, HDR, and 144Hz refresh rate.

It’s an impressive beast that has every other monitor beat in terms of specifications and features. The G-Sync powered monitor has an impressive brightness of 600 nits – far superior to most gaming monitors you’ll buy. The stunning contrast ratio of 50,000:1 makes images pop out when combining with HDR.

There really isn’t anything that this monitor isn’t good at, except the pricing. It’s ridiculously expensive to a fault, costing nearly 2 grand in US dollars to get your hands on. This makes it severely limited in accessibility to only the most elite gamers who value eye candy above all else (and have the computer to back it).

Resolution is the most important factor in your purchase and is self-explanatory. Modern high-end PCs can run most games comfortably at 1440p, so we highly recommend 1440p monitors if you have the most powerful graphics cards. If your PC cannot run videogames at such a high resolution, then it’s best not to spend on a high-end gaming monitor and instead buy a regular one with a high refresh rate.

If you’re a competitive gamer, a higher refresh rate will be extremely important for you. A higher refresh rate means a gaming monitor can support more frames per second. If your game’s framerate goes beyond a monitor’s refresh rate, a phenomenon called screen tearing occurs which is undesirable for many gamers.

G-Sync and FreeSync are technologies for monitors made by Nvidia and AMD respectively. The function of both technologies is the same. This tech helps keep frames per second smooth, combating screen tearing and diminishing input lag. Basically, this is Vsync on a more dedicated and universal level.

G-Sync will only work with Nvidia GPUs, and the technology is built into the monitor. It is very slightly superior to FreeSync in function, but G-Sync monitors tend to cost a lot more.

FreeSync, as the name suggests, is free to use by manufacturers and built by AMD. An AMD graphics card best utilizes FreeSync technology.

For the longest time, TN panels remained the preferred choice for gamers even when IPS displays were widely available. TN panels have very poor viewing angles and do not provide a sharp image like IPS panels.

IPS panels provide better contrast and colors and generally look far better than any TN panel can ever dream of.

The reason for the preference of TN panels was because of the response time. The response time is the amount of time the screen takes to update the visuals. It can have a substantial bearing on the performance of an individual in games.

A gaming monitor needs to have as slow response time as possible. TN panels still offer the best response time of practically 1ms. However, IPS panels have caught up now and can go to as low as 4ms. The difference between 1ms and 4ms response time is almost completely indiscernible, which is why TN panels are quickly becoming obsolete even for gamers.

Why are gaming monitors so expensive?
Gaming monitors are expensive because they are fine-tuned to provide the best performance possible. For normal use monitors, companies don’t need to focus too much on refresh rates and response time and instead focus on the image quality.

With gaming monitors, the image quality and the speed/performance of the monitor both matter. Higher resolutions with faster speeds dramatically increase the pricing of these displays, especially when combined with the costlier IPS panels.

What effect does a high response time have on the visuals?
A response time longer than 10ms can cause what is known as ghosting, which creates this strange blur that can distort the picture and disturb gamers.