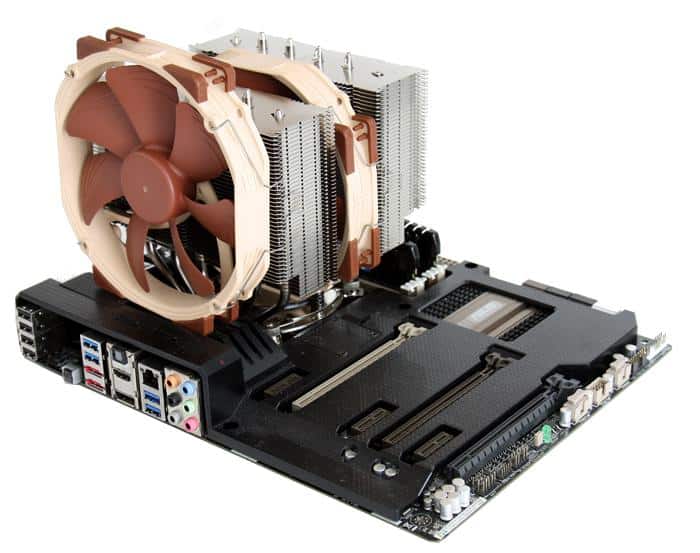 With the Ryzen series of CPUs from AMD, overclocking has become widely available these days. But overclocking will raise the thermals of your CPU severely, the stock CPU cooler does not hold. Whether it is Intel or AMD, you need the best CPU coolers if you want to overclock.

What we did was, compile a list of the best CPU coolers that can be used for this purpose. We reviewed them and checked the thermals on idle and then during stress testing and found these to be best.

We took temperatures using various methods and compared them to find an average for this purpose. Everyone knows that once thermals reach a certain point, your CPU ends up thermal throttling.

It is important that your cooler efficiently cools the processor if you plan on overclocking. Always accompany your cooler with a proper thermal grease so that there is proper conductance of heat. You should always apply enough but never apply too much thermal compound.

If you are relying on air to cool your CPU, then make sure you have good airflow. Choose a case that promotes good airflow inside. Also, installing a few case fans also helps in getting more inside for the cooler to blow on.

The more the number of heat pipes on a cooler and its conductance, the more it will cool the processor. There are also fins that absorb heat and spread it around so that the fan can cool it.

In water cooling, a radiator is used to cool down water that cools the water-block. A water-block is placed in direct contact with the heat-spreader of the CPU. It cools it down with flowing cold water that is pumped with a motor in the radiator.

There is also a coolant used in most liquid coolers along with the water. This helps in cooling down the radiator faster than normal. But do not neglect a good airflow just because you have a water cooler on your CPU.

VRMs and even your RAM needs cooling as well, so having proper airflow keeps your whole system cool. That is why most tech channels either recommend a case that promotes airflow or normal CPU cooler. 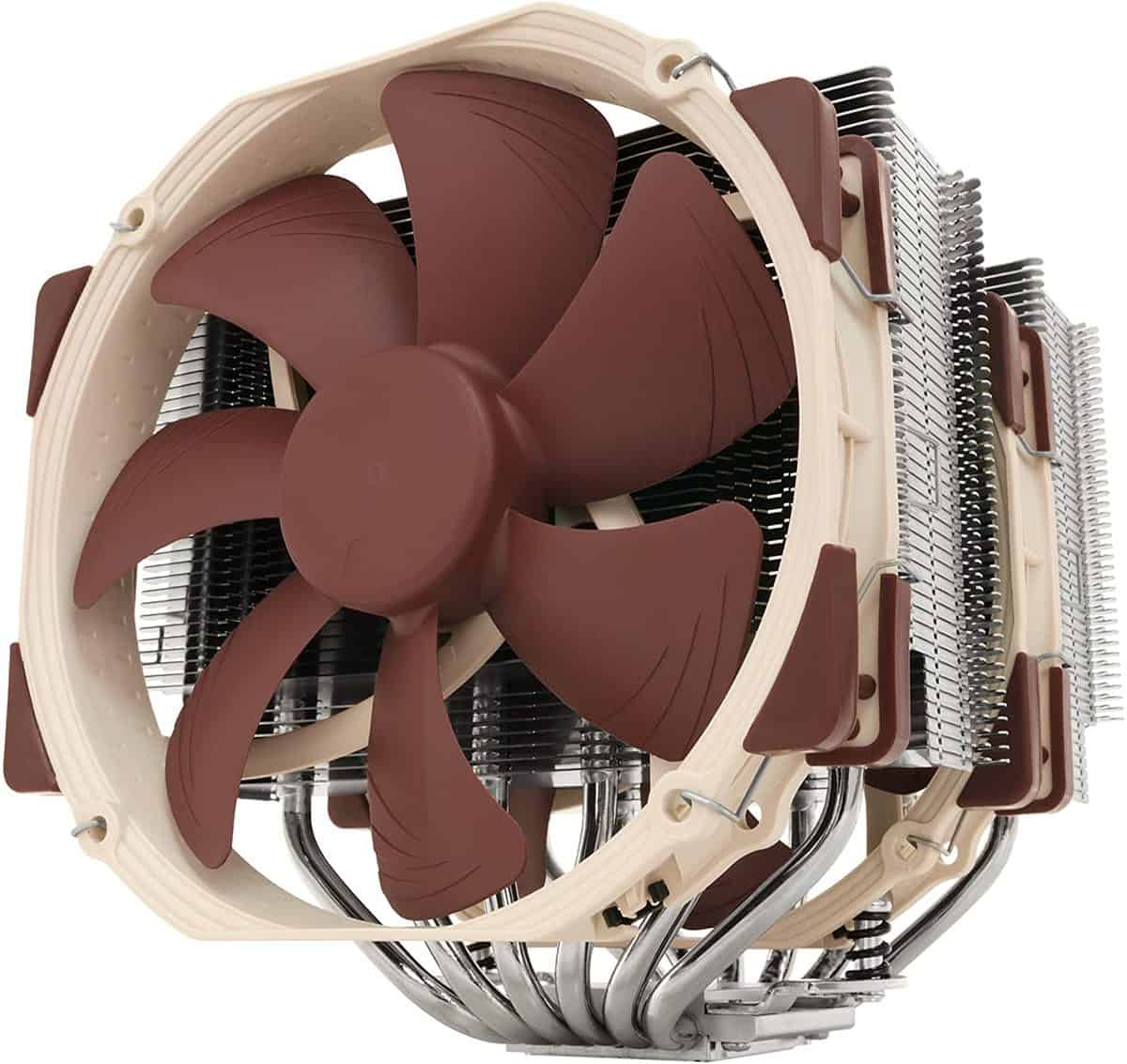 Designed after the award-winning, NH-D14, the Noctua NH-D15 is obviously the best CPU cooler in the market. It is undeniably, the best cooler, which is said to be on par with high-end liquid coolers.

If you are not too big on RGB lighting and care about performance, Noctua is for you. Based on the award-winning design of NH-D14, the NH-D15 is the go for most enthusiasts.

While many people have often complained about the color scheme of the Noctua coolers, the company states it focuses most on the performance. An added coat of paint might hinder the maximum potential of a cooler.

But due to wide feed-back company released the Black Chromax version of their fans as well. So if you want you can opt for that instead of the normal one.

As far as thermal performance goes, Noctua uses its best fans in the NH-D15. On max loads, you can expect temps around 80-85 Centigrade on the hottest of CPUs.

But that is not the only thing Noctua is famous for, their fans are also very quiet. In fact, during max loads, there was minimal audible noise during stress testing.

The Noctua NH-D15 comes can be used with a single fan or double fan setting for push and pull configuration. It is not the most affordable cooler out there, but its performance is worth the cost. 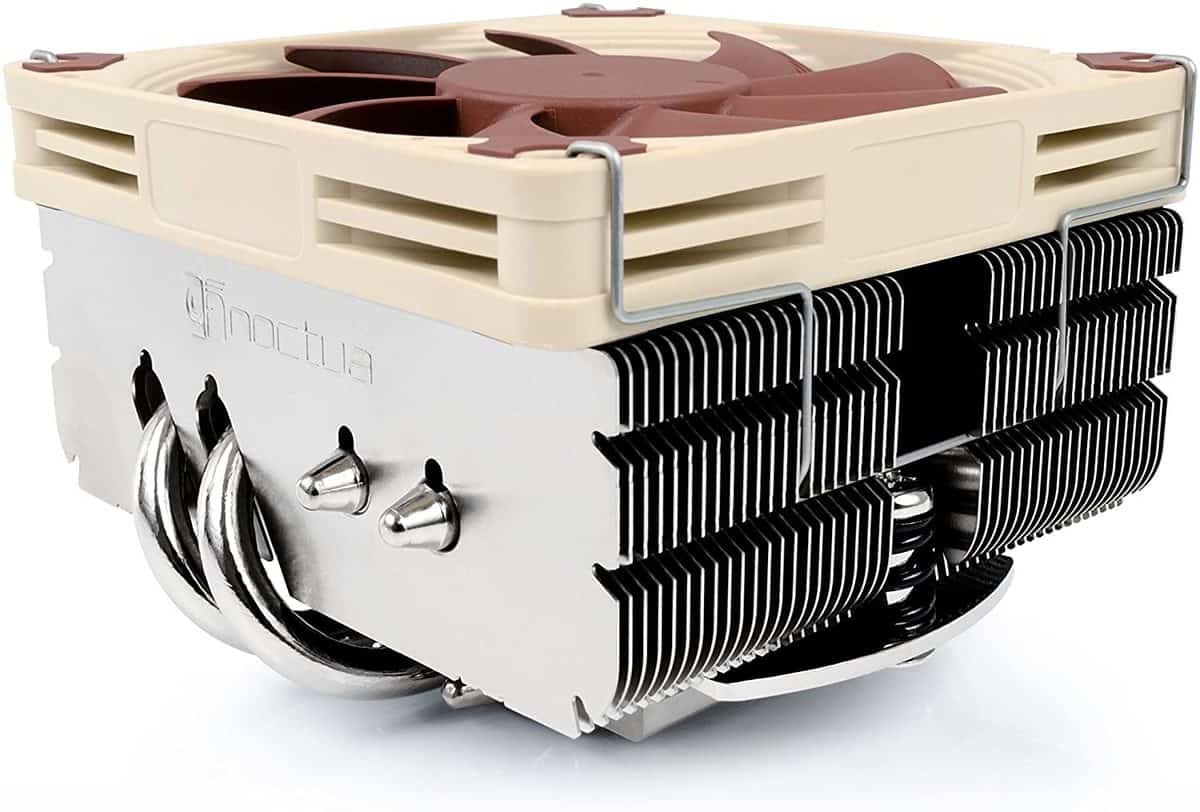 When it comes to small form factor rigs, the Noctua NH-L9X65 will fit perfectly where most coolers won’t. This CPU Cooler is super low profile and can fit in something like the Fractal Design Node 202.

Noctua being the leading manufacturer of CPU coolers in the world, it’s no surprise that it also has the best low profile cooler. While there are other smaller CPU coolers but they cannot handle the heat like this one.

While the Cyrorig C7 feels like it is a tad bit smaller than the NH-L9X65, it cannot outperform it. But do not expect to be able to overclock on an ITX build without a water cooling solution.

It is due to the fact that ITX builds are small and do not have much airflow. So overclocking might not be stable unless you have built a good airflow solution in the case.

You can expect around 40-60 centigrade in idle depending on the room temperature. If you are from a colder environment, you might get around 45-50 centigrade. In hotter places, it can go up to 65 degrees.

It is clearly a great low-profile CPU as it is performing twice as better as stock coolers. It gives around 9-10 centigrade difference compared to the C7 making it the clear winner. 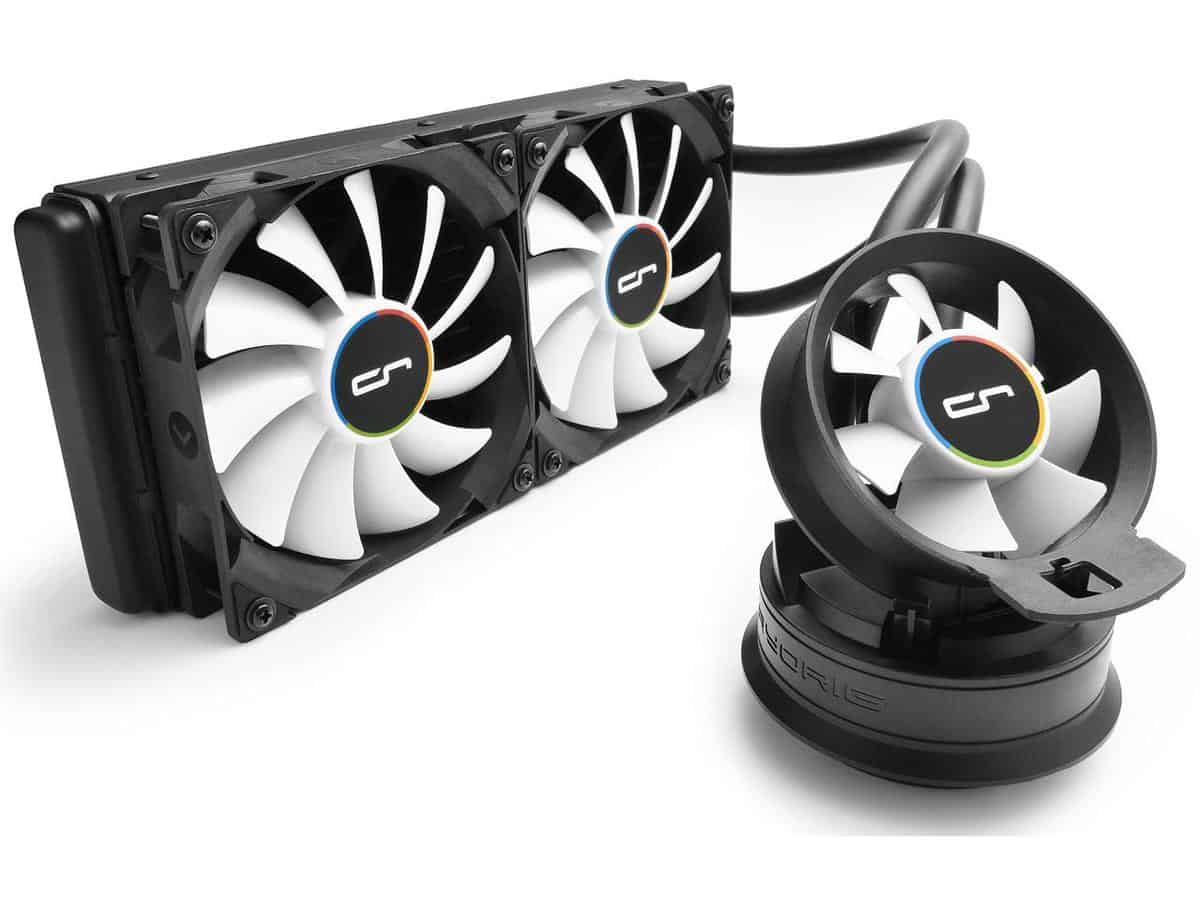 Hybrid cooling technology is not just for show, it really works, and Cryorig A80 proves it, just below the $100 mark, it is a simple liquid IO cooler with no RGB, but a design that maximizes its cooling potential.

An 80mm fan on the pump header that cools the VRM and the motherboard other than the CPU itself, significantly reduces the CPU temperatures as well.

The Cryorig A80 does what it’s supposed to best, it cools down your CPU along with your motherboard and the VRM. This is important as when you are overclocking it puts a huge load on the board as well, not just the CPU.

Liquid IO coolers only cool the processor with a pump header and leave the other components on the motherboard to depend on the case fans and their airflow. But the hybrid cooling technology on the Cryorig A80 allows you to point a fan straight at the VRM to reduce the heat build-up and dissipate it.

Most boards that come with a VRM heatsink allow for cooler operation, but with the addition of a fan that blasts air straight at the VRM would considerably cool it down further allowing for a smoother operation throughout.

The only other liquid IO cooler with a similar design is Arctic Freezer, but the fan on it is pretty darn small.

The cooler comes with adjustable mounting brackets for both, Intel and AMD Ryzen CPUs, and the whole thing is surprisingly very easy to install. It comes with all the necessary equipment you would need and you might not even need tools to set it up because of the design of the installation.

The Cryorig A80 is so famous amongst overclockers, it is mostly out of stock on Amazon, although you can find the Cryorig A40, which has smaller fans but has a similar design.

If you truly mean business rather than showing off, this fan is just for you, as it does not have RGB but is one of the top liquid IO coolers.

Corsair does not only have the best PSUs in the market, but it also has one of the best Liquid AIO Coolers. The H100i RGB Platinum AIO Liquid Cooler by Corsair is the premium pick for our category.

The name of this cooler can be a mouthful, but so is the price. But if you have money to spare, you can bask in the greatness of this AIO liquid cooler which will allow overclocking without issues.

First of all, as the name suggests, there is some beautiful RGB lighting on this liquid cooler. The water-block and the fans both have RGB that can be controlled for different effects.

The water-block also has RGB lighting, which gives a really good gamer aesthetic to your system. If you have a tempered glass case, then this AIO Cooler will make people jealous of your rig.

Lastly, since it is expensive, thus our top contender for the premium pick. It will cost you around the $300 mark for the 240mm version, which is not bad as there are more expensive options out there. 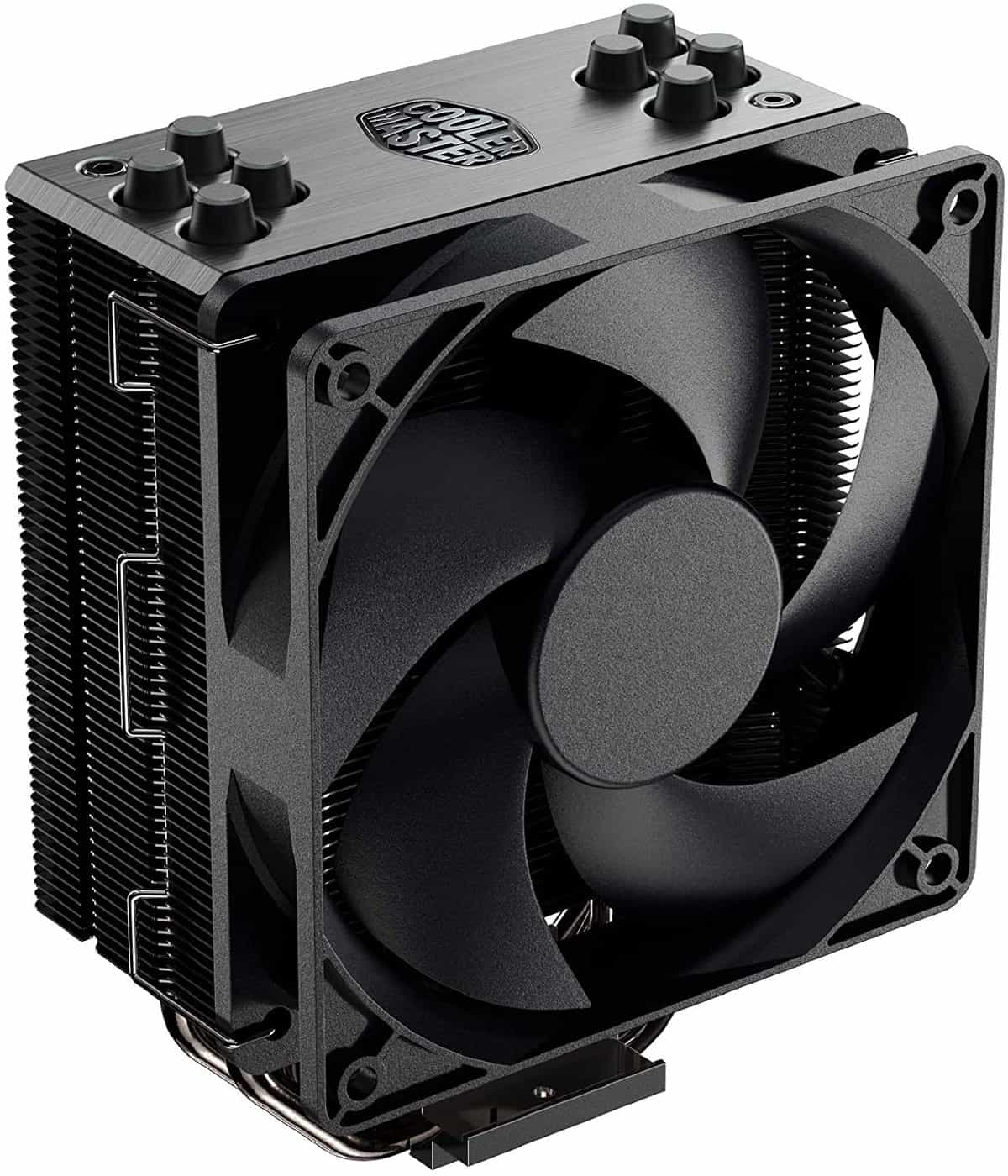 While you cannot expect the most optimum performance from the cooler, the Cooler Master Hyper 212 RGB is still a great budget CPU cooler with RGB lighting.

With great RGB lighting and a black look, the Hyper 212 RGB from Cooler Master is a great budget CPU cooler. It will give you 25-30% better performance than a stock cooler at full loads.

This cooler has 4 heat pipes that are used to transfer heat from the heatsink to the fins for cooling. The RGB lit fan is a good addition if you want aesthetics and cooling performance.

Though there is also a red LED version available for a little cheaper, but we threw in the extra money for the RGB, because why not? Gamers love their RGB after all.

The noise level of the fan was not as good though, it was a bit louder compared to other coolers we reviewed. But for the price point, you can hardly find a better CPU cooler with RGB.