Laptops were designed to make the portability of personal computers easier. But with advancing technology, it is easier to get more in small packages. That is why you can find laptops as small as 11 Inches or below. Now it can be troublesome to find such a laptop very easily, let alone know which one is great for you. That is why we reviewed the best 11-inch laptops.

As far as technology goes, you cannot expect your 11 inches big laptop to be a supercomputer. So you will either have to cope with specs that are not as great as you would want. Or you could always cough up more money and get a premium product. Either way, what we did was find the best 11 inches systems for you and reviewed them.

Most of these systems ended up with an Intel Celeron CPU due to their limitations. But even then they are perfect devices that can handle your day to day office tasks and workloads. It is not uncommon for people to opt for Chromebooks in that aspect, as it is an affordable option.

The biggest advantage of having a small form factor is its portability. Most of these are designed with such thought in mind, so they are very light and compact. But with portability, there is often some sacrifices made. Like for instance, using eMMC instead of SSD in some of these devices.

You might have seen Chromebook specifications and wondered, what is an eMMC? Or what is the difference between an eMMC, a traditional HDD, and an SSD? It is simple as that, an HDD or Hard Disk Drive is a mechanical storage device, that uses magnets to store your data.

An SSD or Solid State Drive uses NAND Flash Chips to store your data. With an advanced controller, it is writing data simultaneously on many chips at once, thus providing you with higher read and write speeds. This makes the SSD not limited by the speed of the chip itself, creating many paths for data to store at the same time. This improves speed dramatically.

While an eMMC or embedded MultiMedia Card is something similar to an SSD, as it uses a NAND flash chip. But what it lacks is the sophisticated and advanced controllers that help boost the speed of an SSD compared to an eMMC. So laptops containing an SSD are typically going to be faster than an HDD or an eMMC.

You will mostly find Core series processors all across Intel-powered computers. But on some laptops, you will also see Intel Celeron Series CPUs. They both are from Intel, but there is just one huge difference between them. Most Celeron processors, even if they have the same amount of cores, have slower speeds. Compared to Core i-Series CPUs they have a smaller frequency and clock speed.

But then why is Intel supplying laptop manufacturers with Celeron CPUs instead of Core i-series CPUs? Answer to that is the price and their power consumption, they are cheaper and consume less power. That makes them ideal for laptops for budget consumer, who requires it for light workloads and maybe entertainment. Our top pick for the 11-inch laptop category is the HP ProBook X360 G3, which has great specs. It has solid-state storage and DDR4 RAM to partner with it for great speeds.

While a Celeron may not be as powerful as a Core series CPU, it certainly is cheaper. That is why this laptop can be found brand new, under the price of $400 depending on where you buy it from.

The HP ProBook X360 G3 is a perfect work laptop, as it is a 2-in-1, which makes its interface ideal for it. While it does not have a lot of power, compared to our Premium Pick, but it can pull off medium workloads with ease.

The Intel Celeron N4100 in this laptop has 4 cores, which is 2 more than N3060 CPU in most Chromebooks. It has a base frequency of just 1.1GHz but has a burst frequency of up to 2.4GHz which it can reach under heavier loads.

We already touched on how an SSD is better than other storage options, and this laptop has it. The HP ProBook X360 G3 has a 128GB SSD which can be expanded, giving this laptop room for improvement later on.

There is 4GB of DDR4 RAM in this laptop, which gives it an obvious advantage of higher bus speeds. The edges of the laptop are rounded off, making it very easy to put in and take out of a bag.

This laptop is ideal for people who need to take their work around with them. The SSD makes reading and writing faster, while the 4-cores in this model of Celeron CPU makes it great for light multitasking.

The price is not half bad either, you can find it less than $400 on Newegg. Which is pretty cheap if you put it up against others with lower specs than this one. The Asus VivoBook L203MA is a great budget laptop that is available under $300 on Amazon with ease. The specs on this system are not half bad, but there is a lack of storage options in this.

The Asus VivoBook L203MA is not a widely available model, you can hardly find it. We were able to find a link on Amazon which has it available under $300 for a brand new piece.

This laptop has a Celeron N4000 which is a 2-core CPU with a base clock speed of 1.1GHz. It can go up to 2.6GHz under stress to complete given tasks. The 4GB LPDDR4 is an obvious choice for a budget pick as it is a low voltage consuming module. But the lower voltages also accompany lower speeds than average DDR4.

There is 64GB eMMC flash storage on the Asus VivoBook L203MA, which might not be enough for most people. The laptop also has a 180-degrees hinge on the display.

Lastly, it has a USB-C type port, of course, you will not get Thunderbolt for a budget laptop. The laptop is only 0.7-inch in thickness making it extremely thin and light. For our premium pick, we have the Lenovo Yoga 710 2-in-1 laptop, which is very pricey. For the price of this laptop, you can easily buy a gaming laptop of a bigger size.

Check Price on Amazon
This laptop is the only one on our list with an Intel Core-i5 mobile CPU. While it does not have a large number of cores, it certainly has better clock speeds than others.

With an Intel Core i5-7Y54, the Lenovo Yoga 710 2-in-1 is the fastest laptop on our list. Of course, that also makes it the most expensive one as well. We could not find many laptops within the 11-inch range with better CPUs than this.

The 2-in-1 in the name means that it has a touchscreen that is quite responsive. It does not compare to the Flex model or other higher-end models though. The premium price may be a turn off for most people as well, as it is very pricey.

In memory, you get 8GB DDR3 RAM, which does not have the fastest bus speed, that would be DDR4. The storage, however, is great, you get 128GB of solid-state storage for fast read and writes.

The display is an FHD, meaning you get 1080p resolution on your screen for better quality. The Yoga series is famous for its 360-degree flip design, and so this laptop also sports it.

Lastly, it is only 0.6-inches in thickness making it extremely thin, while it weighs around 2.3 pounds. This laptop will set you back about a grand, as you can find this laptop on Amazon for $1099. 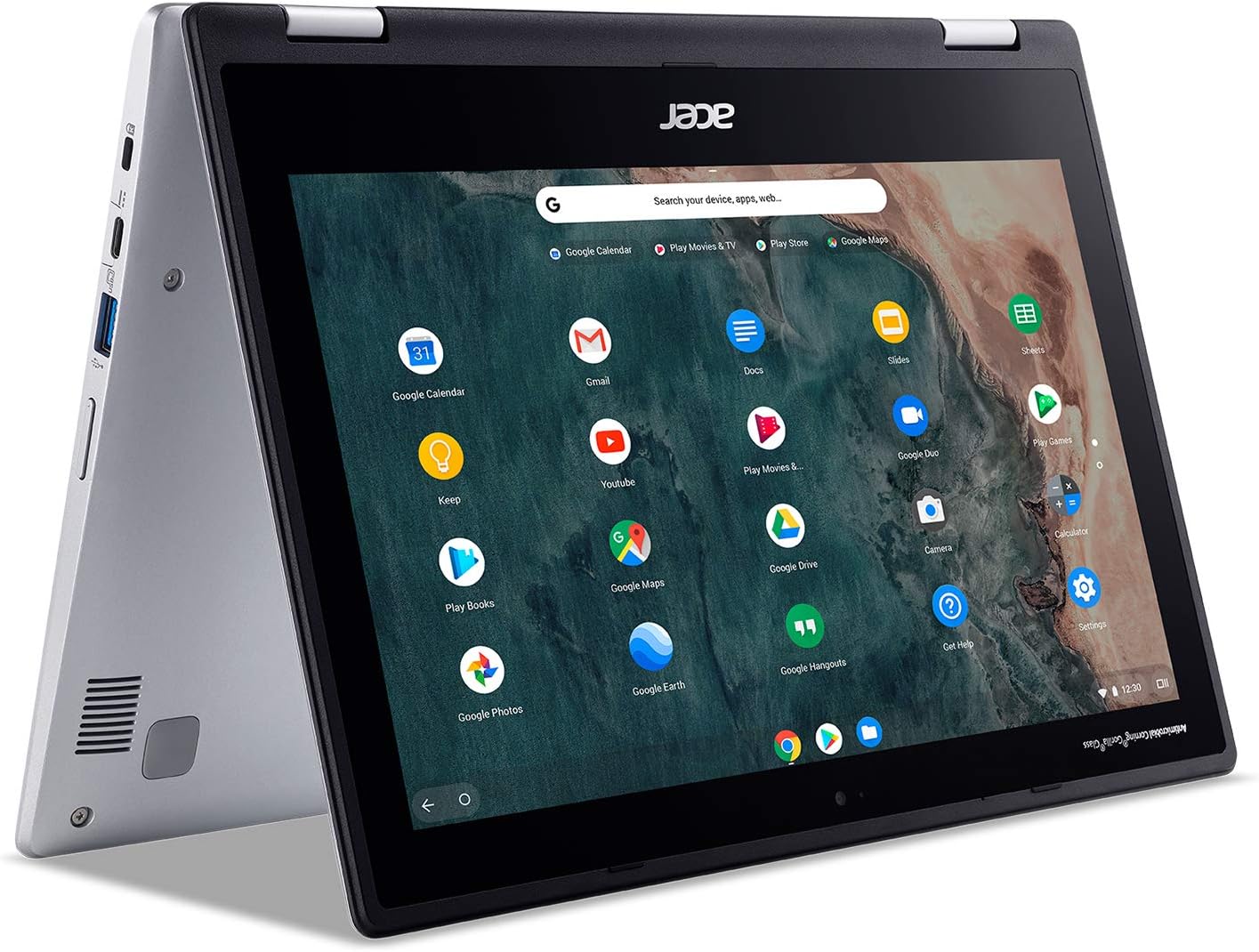 For what it’s worth, the Acer Chromebook Spin 311 is one of the best 11-inch laptops.

There is nothing much else to say except for the fact that the Acer Chromebook Spin 311 is a total package considering it’s a Chromebook. Its portability and accessibility options combined with how easy it is to set up make it one of the best Chromebooks.

Chromebooks may just be the hottest thing to have when it comes to business or work in general. These laptops are small, lightweight, portable, and have many accessibility options. That’s exactly what the Acer Chromebook Spin 311 is all about.

The Acer Chromebook Spin 311 is an 11-inch laptop that boasts amazing features and portability. The design is simple with a shiny silver finish. As the name implies, the Chromebook uses the Chrome OS for cloud computing and functionality.

No Chromebook is complete without having 2-in-1 convertibility. The Acer Chromebook Spin 311 features 4 modes; Display Mode, Tablet Mode, Tent Mode, and the Laptop Mode. It is also lightweight at just 2.6 lbs, and along with its 11-inch size, it is extremely portable.

The Chromebook Spin 311 features an HD touchscreen. The performance isn’t bad either; the Intel Celeron N4000 along with 4 GB of RAM provides great performance capability and multitasking functionality. As for storage, it comes with 64 GB of internal storage.

And if that’s not enough, then you also have the option of utilizing the 100 GB Google Drive storage. The laptop comes with in-built security features, keeping your device and data safe from threats. It is also optimized for Google Apps as well; you can use your favorite applications from the Play Store. It also comes with pre-installed standard Google Apps. This particular model of the Dell Inspiron 11 has a 7th generation AMD A9-9420e that has integrated Radeon R5 Graphics. It is not exactly the best in the market, but it is still a great buy for the price.

A 4GB DDR4 2666MHz memory module makes this laptop quite capable, while the 64GB eMMC makes the storage subpar. The screen is an HD back-lit touch display, with a 360-degree design so it can be converted into a tablet as well.

Powered by Windows 10 Home version, the storage does limit you quite a lot. But having integrated graphics, it can handle light graphical loads, maybe play a few low-spec indie titles.