Arma 3 is a Sandbox Type Shooter 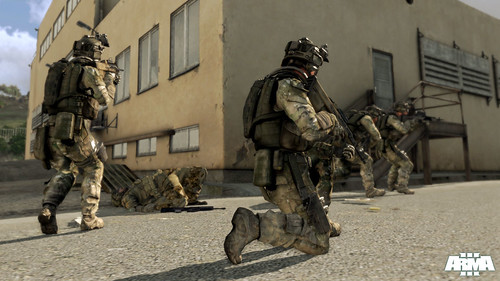 In an interview with Evereye, Bohemia designer Ivan Buchta has revealed that Arma 3 will have the sandbox aspect in which players will be allowed to pursue the side quests during their main objectives for extra equipment or vehicles.

In the game, the player can obtain either “quests” directly related to the story, or some “side-quests” which would help him to get something special: equipment, information, guerrilla support, vehicles and so on. For example, your main objective may be to destroy an enemy base, because a friendly force is threatened by the enemy presence. By following some hints, you may eventually get a local guerrilla chieftain to distract the OPFOR in order to weaken its defenses or receive some close air support, all of which can make your effort much easier

He also mentioned that pursuing the side quests may also change your main objective due to some extra Intel provided to the command:

To achieve such changes, you would probably have to do a favor for the guerrilla commander or to prove the need for CAS by delivering some extra Intel – simply to accomplish a “side-quest”.

Arma series has been known for realistic gameplay just like Operation Flashpoint. This new feature may help in diversifying the experience of the game.