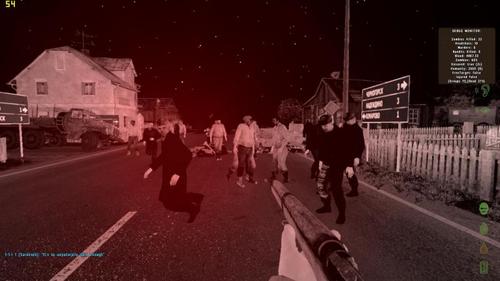 Addiction to the DayZ mod for Arma II is spreading virally, just as the zombies in it seem to spread their infestation more and more.

From the day it got released, both shooter-lovers and simulation enthusiasts have been attracted to its unique concept of being an accurate zombie-apocalypse sim – an idea never seen before in the history of gaming.

And let’s face the fact: we’ve been virtually slaying zombies for a long time, but we have little idea of how to survive in an apocalypse if it hits the real world. So, by accepting the paranoia of the zombie-apocalypse hipsters, we’ll have a look the few things you should keep in mind when you initially enter the world of DayZ.

Though this guide is primarily targeted for beginners and newbies, we hope the more experienced could also learn a set of new things from it.

No One Is Your Friend
Remember this: If you find another non-zombie person, don’t go running and giving him/her in a hug, not even if you’re over-flowing with emotions. No one is your friend in this game, unless you have actually invited friends to play.

You have to be aware of the fact that in a zombie apocalypse, others will try to loot you of whatever you have, so trust no one. Your approach shouldn’t even be just skeptical; in fact, you should always presume that everyone and anyone you meet is a total asshole with no respect for life or what is left of the virtual humanity.

The concept of Humanity has been introduced in the recent update. This basically shows how awfully mean you are to others. If it drops too low, then your character model is turned into a Bandit, which is not a very encouraging embodiment.

Awareness is the Key to Survival
First thing, above all others, is that you have to be aware. The emphasis of awareness is not only for your surroundings, but primarily of your HUD and on-screen indicators. So, let’s go over the necessary things.

Keep your eye on your hunger and thirst. These things play a vital role in your mobility. When it’s time for a snack, or water to drink, make sure you do so. The Ocean water doesn’t seem to dehydrate your character, so there’s tons of that available – always make sure you’re carrying sufficient amounts in a couple of cans or something.

Do note though, that it is possible, this flaw might get patched up in future updates, but for now; you can avail it all you want.

You have to keep an eye out for how loud you are, and how visible you are. These two things are EXTREMELY important, as it’s not only the zombies, you have to worry about, but also Bandits and other parasitic human dwellers.

On a somewhat related note, you might want to adjust your in-game communication. Use the ‘,’ and ‘.’ keys to switch back and forth between channels, which heavily determine your communication in the game. There are three channels there, but you should always opt for Directional.

Directional allows only people around you to hear you, but the other two will make you go global. Believe me when I say you don’t want to be announcing your circumstances and position to everyone in the world.

Awareness of Surroundings is Also the Key to Survival
Though I stressed HUD and self-awareness quite a bit, it’s important to understand that awareness of your surroundings will also determine how long you last. Make sure you avoid traveling on hard foundations, such as Asphalt roads and concrete surfaces.

You’ll make much more noise walking on these areas as compared to other, softer grounds. This is ultra-important for the more heavily infested areas.

Crouching and avoiding hard ground should get you silently past both the zombies and the potentially unfriendly humans. Once again, you don’t want to attract anyone’s attention; you’re a lone-wolf, and it should stay that way.

Do note that zombies can’t run indoors – they prefer the sunshine or the moonlight, if it’s night time Thus, if you sprint into a building or so, they won’t chase you inside – they’ll just walk away. Don’t expect the same from humans though.

Speaking of buildings, one should always observe the type of building, because that will give you a hint what kind of loot to expect in it. Barns and other similar buildings will contain things like shotguns and hunting rifles, whereas high-tech buildings or military regions will contain heavy-duty stuff.

Do remember though, that having great equipment most of the time means you are a bigger target for Bandits and alike.

Another very essential thing to note is not to stay in open regions. If you have to travel to certain locations, try your best to go through forests and other unconventional places. Bandits will often lurk in the open for potential preys, so it’s always wise to take the path with the most hiding capacity, and one that is least expected.

If you hear gunshots nearby, make sure you stay low. Press Z to go prone if you are slightly unexposed, and then try to slowly find a spot to hide. Remember, it’s always best to avoid a fight with another survivor than to engage in one.

Conditional Problems
Since this is a simulation, it will model things like hunger, thirst, and at times other fewer common symptoms. We’ve already discussed a bit about thirst, so let’s see what to do when you’re hungry.

Okay, so your stomach is growling. The best thing to do is a search for canned food and other loot in various areas. If you are in the forest, an alternative is to look for a wild animal.

You’ll need to hunt the animal down, skin it, cook it, and then devour its various parts. It makes a gory and tedious meal, but many times it’s safer than having to search for food in potentially risky areas. You’ll need a Hunting Knife, Wood, Hatchet, and a Box of Matches to hunt and cook.

There are also chances of you getting sick. If you get temperature, or become infected with an illness from other players or rotten animals, your BP will begin to drop fast to a minimum of 6000. It is at this time that you must search for Antibiotics.

To avoid such complications, always keep some Antibiotics with yourself. Illness and disease are a large part of a zombie-infested world, so keeping pills with yourself is as important as wearing clothes in public.

When you are under attack, be it from Zombies or other players, your heartbeat rate will increase rapidly, which will make you thirsty and hungry much faster. Be prepared for such moments with backups.

Weaponry and the Fight for Survival
Use weapons like M1911 .45 Pistol, 1866 Winchester, and maybe a sniper if you can find ammo for one. However, the sniper shouldn’t be for Zombie-killing. Instead, it is for retaliating against those pesky Bandit snipers who try to shoot you from afar.

Snipers will often position themselves in cities and urban regions – which should be avoided most of the times, but if you have to go there, then you should go with a sniper.

Apart from that, I personally feel the Winchester is the best weapon. Avoid the Makarov – it’s absolutely useless.

This doesn’t mean, however, that everyone you meet IS bad. Yes, it’s the safest approach to presume that everyone is, but at times you won’t have the resources to fight, or perhaps you would want to show that you are not someone willing to harm another character.

You can do this by typing/saying “friendly” in direct communications, lowering your primary weapon, or saluting. Beware however, that those with evil intentions might see it as an opportunity to slay you and take your stuff.

These guidelines should help you become more aware of what goes on and off in DayZ. It’s a fantastic Sim, but having the nature that it does, the constituents – both artificial and real – are not very welcoming, and one who is naïve is an easy target for the conditions, the zombies, and even other players.

If you have any additional tips that you would like to share, please do so by commenting below. For more help on DayZ Mod, read our Installation, Tweaks and Error Fixes Guide.