AMD has a quite a year ahead of itself as the company plans to roll out the world’s first ever 7nm CPU, 7nm GPU. However, AMD doesn’t intend to stop there if the rumor is to be believed. According to the report, AMD X570 Chipset is coming along with PCIe 4.0 in 2019.

PCIe 4.0 is expected to launch in 2019. However, a report has emerged suggesting that AMD X570 Chipset will be announced at Computex 2019. According to the report, the AMD X570 Chipset will feature support for the PCIe 4.0. This information comes from the leaked slides from Gigabyte’s internal presentation, which you can see below. 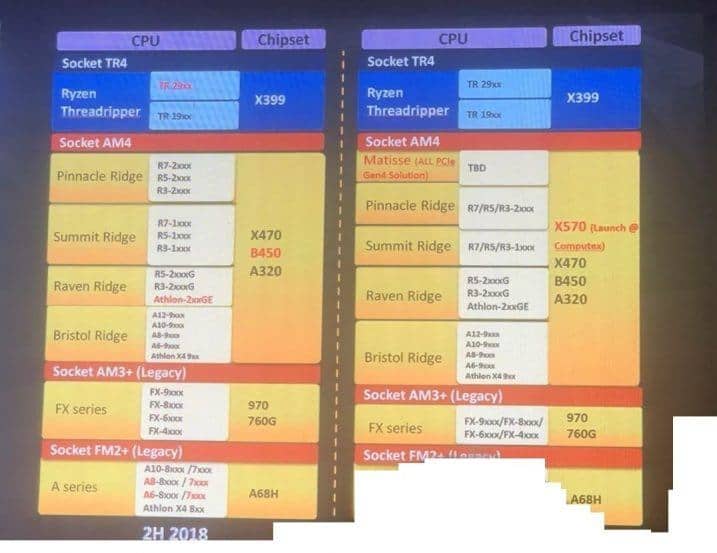 These leaked slides reveal some info that we already know. Like AMD X570 Chipset is backward compatible with Ryzen CPUs. AMD previously confirmed that it will support the AM4 socket till 2020. So, expect the X570 Chipset to come with support for previous-gen AMD CPUs.

Furthermore, the PCIe 4.0 brings significant improvements over PCIe 3.0, like doubling the bandwidth from 8 GT/s to 16 GT/s. This will not only allow for better GPU performance but, will also help with other PCIe devices like M.2 SSDs and more.

Add AMD X570 Chipset to the list of AMD products for 2019 and its seem that AMD is prepared for taking on Intel. Next year will see the launch on world’s first ever 7nm CPU, GPUs, AMD EPYC Rome with 64 Cores and 128 threads.

Speaking of AMD, Ryzen CPUs have outsold Intel by 2:1 for the month of November. The AMD Ryzen 5 2600 lead the charge with most CPU sold but, Ryzen 7 2700X brought in the most revenue.

However, not everything is sunshine and rainbows thanks to Radeon RX 590 GPU. According to the report, the AMD Radeon RX 590 is only displaying a black screen on systems with Linux OS. The issue is caused due to the bugged vBIOS.